Have you ever had a modeling project that has languished on your workbench for some reason? You know the ones I'm talking about - projects that have stalled either from a lack of parts, a lack of skill, or just plain lack of motivation.

Well, I'm embarrassed to admit I had two such projects, especially considering how little it took to finish them up.

Literally all the house at Dividend needed was a chimney and a vent stack.

Like I said, this was an easy project to wrap up - just needed to take the time to do it. Since I'd weathered the walls before assembly, all I have left to do is weather the roofs, porch, and steps.
But that's all done down in the paint room - this project is now off my workbench . . .
The next thing I decided to finally tackle and get out of they way was the the structure formerly knows as Stanly Chemical. I'd last worked on this building way back in April 2019 (well, actually, February 2020 when I reversed it... but that came later). The original plan used Walthers modular parts to create an angled structure that would fit between a siding and the wall in East Berlin (click here for the build). But about a month after starting this project, I acquired a number of gorgeous scratchbuilt structures from Bill Maguire, including one that was a perfect fit for the StanChem location.
Suffice it to say, the structure I'd been working on for that space went on the FAR back burner.
Not wanting to trash it though, I figured - being one of the few brick structures on the layout - I could use it somewhere in Middletown. But the only location that made any sense was practically a mirror image of the space it had been built for - so I had to reverse it. Thankfully, since the structure wasn't finished, all I had to do was swap the end walls, end for end - and, also thankfully, I hadn't gotten around to cutting the roof to fit.
So that was the last big thing I had to do to get this project off my 'bench. . . 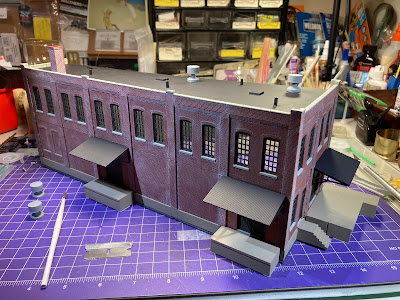 And here's the finished building. I used my now-favorite glue (Loctite Gel Control super glue) to add the rest of the details. It works well even if the gluing surfaces are painted (as was the case with the joint between the brick walls and dock roof supports), and it works fast so no clamping is needed - just hold in place for half-a-minute.

It's SO nice to have these projects off the list - literally and mentally. I've since discovered that the ideal location for the factory building is going to require some, um, excavation in Middletown. But that's ok. There's certainly no hurry. I still have Dividend to finish - and thankfully, getting the house off my bench means I'm one step closer to that goal as well.

Thanks for staying tuned and following along!

Email ThisBlogThis!Share to TwitterShare to FacebookShare to Pinterest
Labels: Structures