Like many folks, I have a definite love/hate relationship with Facebook. It's a time suck, and often a source of frustration (typically remedied by, um, "modifying" one's feed to eliminate political posts), but it can also be a source of quick feedback when posting about modeling projects. That's the main reason I started the FB group - "The Valley Local - Modeling the New Haven RR, Autumn 1948" (be sure to check it out - and join if you like), but maintaining two "journals" (three, if you count the Valley Local website) can be a challenge.

All three platforms have their strengths. Typically, the most-up-to-the-minute progress is shared on the FB group. Topics/posts too large for a quick FB post - and/or that are heavy on photos - get posted to the blog. Eventually, the more permanent info I want to keep gets loaded into the website.

But human nature being what it is, I too-often take the easiest path in sharing my progress on the layout. Facebook makes it VERY easy to just post a few quick pics with a description - and it's also VERY easy to post comments/feedback and replies. So, despite its drawbacks, the Valley Local Facebook group tends to get much of my attention.

Case in point: Just about every day, I do a "Morning Progress" post on FB showing what I'm up to. And I admit, it's pretty cool not only to see all the "Likes" but the feedback and answers I get usually come within a few hours. It's pretty hard to top that.

But I want to make a concerted effort to preserve my progress here on the blog as well. I own the content here, it's easily searchable and retrievable, and I don't have to worry about FB taking it or erasing it.

So, in that spirit - and because I realize that I haven't done a proper layout update here since before Springfield - here's a compilation of what I've been up to lately, with a promise to be more regular in my posting here.

Some lessons have to be continually re-learned. I've been in this hobby for 37 years and I'm still discovering that so many aspects of it are so much easier than you imagine. You just have to get started. I'd psyched myself out about "craftsman structure kits" so much that I couldn't even do a little garage. Well, that's finally changed. 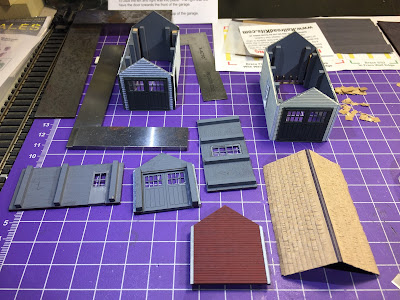 Believe it or not, I opened the first of these kits back in August of 2017(!) There it languished a while, and in the meantime, I picked up two more kits. This past autumn, I decided to do an assembly-line build of all three kits at once (my first-ever craftsman structures) in order to gain some new skills and try new techniques.

Construction was really straight forward - provided you realize that, in this case at least, "finishing" comes before "construction." Here are the quick steps I took: 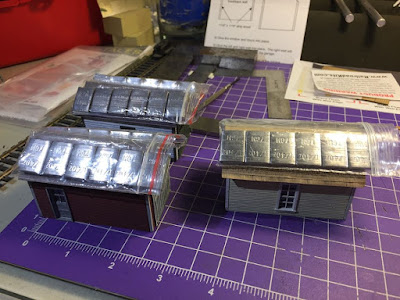 I used some car weights in small plastic bags to weigh down the roofs while drying. 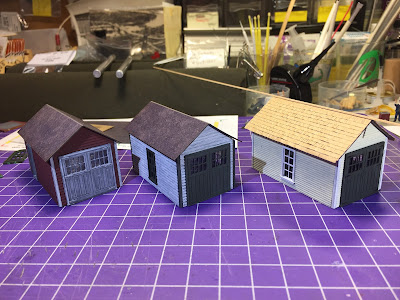 And - in the new skills department - I'd added some Campbell shingles to one of the roofs for variety: 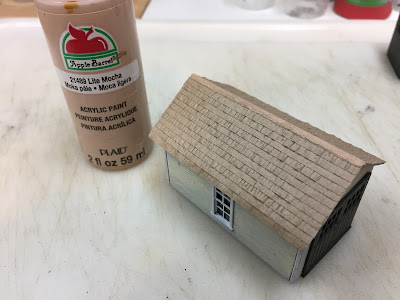 Speaking of roofing, along the way I got a great tip for using medical tape. Click here for more on that. At least one of the other roofs were done with this cool tape.

A corollary to the maxim: "Once you scratchbuild a freightcar, somebody will produce it Ready to Run" must be "If you wait long enough to finish a structure, one will be provided."

That may be an extreme example of wishful thinking, but it worked out that way in East Berlin.

You may recall way back last April(!) that I'd planned on freelancing a brick factory from Walthers modular parts to be Stanley Chemical, and using a Rutland RR station kit(!) for the station in East Berlin (in my defense, at least it was the station from New Haven, um, Vermont).

Well, two wonderful things happened shortly thereafter. In June, I got some beautiful structures from Bill Maguire that fit perfectly in the East Berlin space (and I eagerly used my Modeler's License to include them, despite the prototype), and the next month I discovered a prototype photo of the East Berlin station, which my friend Dave Messer agreed to build.

So, I went from totally freelancing two structures for East Berlin to getting three structures - two freelanced, one prototype, and all built exquisitely by others :^)

The structures I'd started for the space languished a bit, but I figured I'd gain some more skill and experience by finishing them. So that's another thing I've been up to in recent weeks . . . 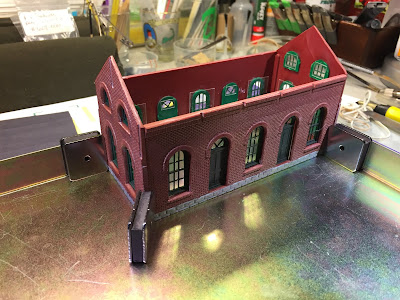 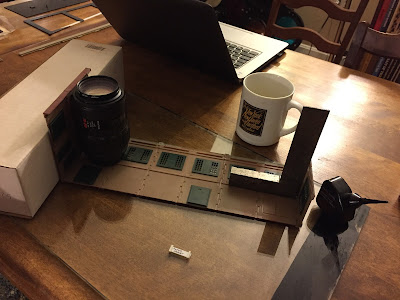 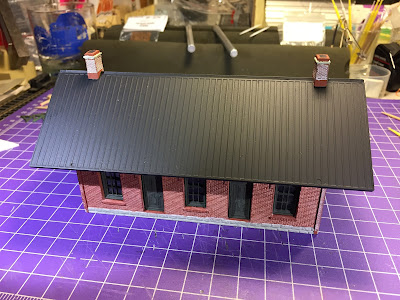 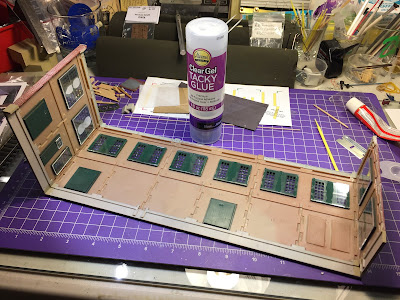 The factory building actually got rearranged to swap the narrow end for the wide end. That way, it will fit nicely in a spot I found for it in Middletown. As you can see above, the walls are done - including the foundation - but I still have to add the roof and other details. I'll be posting further progress on this build later.

As for the station, it's all finished and came out pretty great, IMO. I've debated whether to weather it, but there's really no place for it on my layout, so I'm considering selling it. Let me know if you're interested and I'll send more detailed photos.

When I haven't been at the bench working on structures (and having an absolute BLAST, btw), I've been (finally) getting to the scenery in Wethersfield. Seeing how great trains look going into East Berlin has really lit a fire of motivation to continue the scenery south. And "Finish Wethersfield" has been a New Year's Resolution for - literally - years(!) It's high time I got around to it - and this week's Wordless Wednesday shows I've tackled it with a vengeance! 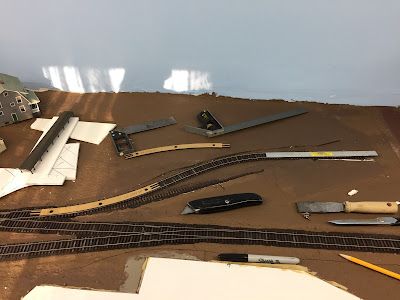 And that brings this here blog up-to-date. The photo above was the "Morning Progress" photo I posted to the FB group just Saturday morning. It shows the Wethersfield Lumber Co. siding modified to more closely follow the prototype (which also had an S curve going into the lumber shed which is/was parallel to the mainline).

There's a lot of work left ahead - more terraforming, ground gooping, and scenicking - but I can happily say that I'm looking forward to it - and hope you'll enjoy following along!
Posted by Chris Adams at 12:01 AM