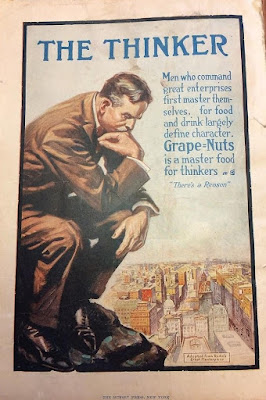 Ever since I picked up my first issue of Model Railroader (January, 1983), the motto "Model Railroading is Fun!" has been emblazoned somewhere at the top of the front cover. Model railroading is "The World's Greatest Hobby" (another motto) - and for good reason: Arguably no other hobby offers as diverse a range of opportunities to learn & practice different skills. From engineering/planning, to carpentry, electrical work & electronics, painting, sculpture, and of course modeling, model railroading really has it all.

It also has probably more than its fair share of rabbit holes to fall down. And one of the largest comes under the broad heading of "Research." We all know folks in the hobby that never get beyond the research stage (aka "armchair modelers") whether from genuine enjoyment and satisfaction, or as a result of "Analysis Paralysis." For some, research is an end in itself and all they care to do.

So-called "prototype modelers" are especially prone to falling down this rabbit hole. And, as an aspiring prototype modeler myself, I've fallen down it more times than I care to count. Most recently this past couple of weeks, while I tried to figure out a more prototypical way to operate my model of the New Haven Railroad's Connecticut Valley Line in the Autumn of 1948.

While immersed in that diversion, I got to thinking (always a scary prospect, especially for one prone to over thinking):

The answer to that question is (or at least should be) "yes." It's a hobby, after all, and if it's not fun then you're doing it wrong.

But that's "model railroading" - what about "railroad modeling" or, more specifically "prototype modeling."

Is prototype modeling "fun?" Is it supposed to be?

Think about someone who has a passion for restoring old houses or antique cars, or curating a museum, or producing a documentary. All those things are probably enjoyable to the folks doing them, and they're hopefully very satisfying endeavors. But are they actually "fun?" I don't know that we typically think of such folks as having fun doing what they're doing. They may love what they're doing and may be passionate about preservation, or research, or sharing knowledge. They're probably enthusiastic about it as well. But are they having fun?

What about prototype modelers - especially the "serious" ones (or those that aspire to be)?

"I'm not including that (track, structure, road, tree) - it wasn't on the prototype."

"I'm not going to use car cards to operate the layout - the prototype didn't, so neither am I."

Sound familiar to anyone? %^) Certainly, if the intent of the prototype modeler is to create a simulation of the actual thing - an operating version of what is essentially a museum diorama - a documentary rather than a novel - then this sort of thinking becomes (hopefully) a bit more understandable to normal folks that aren't as serious committed don't follow a prototype as closely. And I can attest to the fact that there is no feeling like discovering a particular photo or artifact from my chosen prototype that I've never seen before and that answers a lot of questions I'd been asking.

But I don't know that I'd call it "fun" necessarily. "Satisfying" - "eductional" - "enriching" - "informative" - those are all words that come to mind first.

Lionel Strang illustrates the point from another perspective. He asks the question (roughly): "What type of movies do you remember most - that moved you the most - that you enjoyed the most? Were they documentaries or fiction?"

I think we can guess his answer. And I have to admit - as much as I enjoy historical research and documentaries - fiction is often more entertaining than fact. More "fun" you might say.

So I guess all these rough notes/thoughts essentially boil down to this: What is it you're trying to do with your project - be it a "model railroad" or a "railroad model"? What's your intent? What story are you trying to tell? Is it fiction, "based on true events" (as some of the movies say)? Is it total fantasy and 100% a product of your own imagination? Is it an impression of the past, or a photograph?

And perhaps the most important question: "What do you enjoy most?"

"Having fun" is a great answer - especially when it comes to a hobby.

"Recreating a time and place" is also a great answer, but be prepared that it may not be as much "fun" as it is satisfying and enriching.

I've thought for a long time that I was firmly planted on the "prototype" end of the spectrum, but I have to admit that it has its downside (producing long, navel-gazing blog posts being one of them, apparently). I don't want to have to admit how much time I've wasted spent searching for the "perfect" prototype photo or information to complete a scene or enhance my operations.

And I have to admit, while there have been many instances of joy in the discovery of a missing puzzle piece in my prototype research, some of the most fun I've had in the hobby lately has been working on the "fictional" modules or completing a freelance scene using a friend's structures instead of faithfully following the prototype at East Berlin, CT.

And if we're all "proto-freelancers" (and not being paid by a museum to faithfully and perfectly produce a prototype scene), then we're probably free to pick whatever point on the spectrum that we enjoy most.

I, for one, won't be moving the needle too far over toward "freelance" any time soon, but I will take a break from trying to reproduce prototype paperwork and do some more modeling. There's a picket fence that needs to be installed in front of the house across the street from John Wallace's house.

Before you ask, while John's house is perfect miniature of the real thing, the house across the street - and it's fence - are purely products of my own imagination.

Email ThisBlogThis!Share to TwitterShare to FacebookShare to Pinterest
Labels: Philosophy