Every once in a while you come across a way of doing something that is so perfect and so obvious you think - "Now, why didn't I think of that?!" Well, that happened to me a few days ago when my buddy Randy suggested I try using medical tape for roofing material.

I'd been hemming and hawing about what to use on a few little garages I'm building, and even went so far as to do one with some old Campbell shingles I had lying around. But I didn't want to do THAT again if I could avoid it (no matter how great it looks - more on that later...). Besides, a little ol' garage in the late '40s would probably have simple rolled tarpaper roofing. I'd considered strips of paper, paper towel, or masking tape to simulate it - but Randy's suggestion was a game changer. 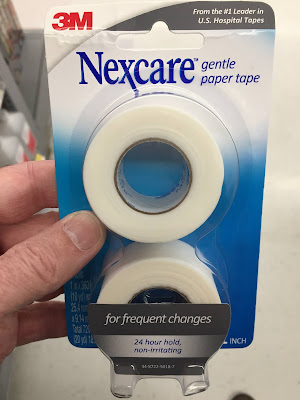 The stuff he uses is 3M paper medical tape. I took the pic above at my local Walmart, but you can get it at Amazon too (what can't you get from Amazon?) 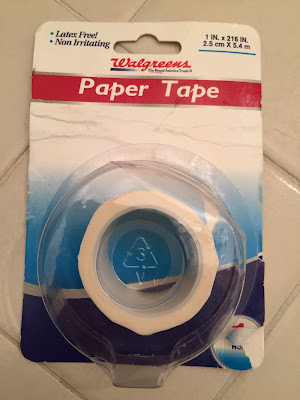 I also had on-hand some paper medical tape left over from my crashing racing days. Here's a comparison of the two: 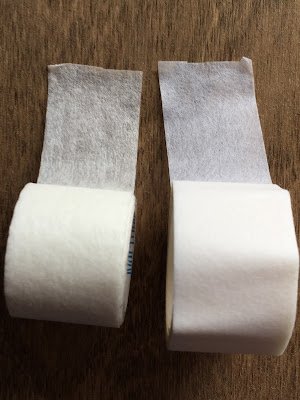 Randy's tape is on the left (he'd given me some to try) and my tape's on the right. I really like his better - it has a more pronounced texture and it's thinner. But I suppose I could use the other in a pinch (or if I wanted a slightly different look). 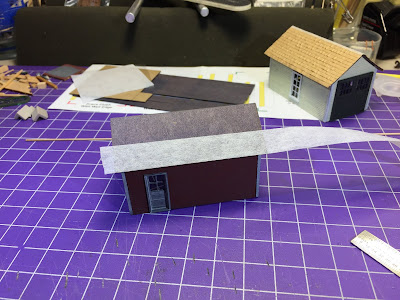 Since it's "tape" it has an adhesive backing, but Randy also uses Aleene's Tacky Glue to make sure it stays. It seemed sticky enough to me as-is, so I just applied it straight to the roof.  This was after I'd narrowed the tape by cutting it into 42" wide strips (in HO scale). The tape is actually 1" wide, and cutting it in half length-wise gives you strips just a bit over 3.5 feet wide in HO. 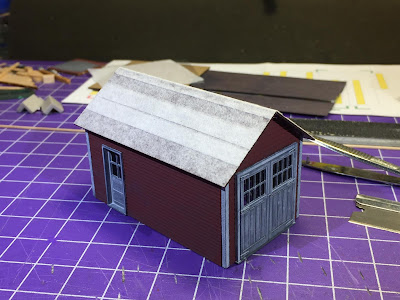 I started at the bottom edge of the roof and overlapped strips, working my way toward the top. I then added a 1' wide strip at the top for a peak cap which would "hang" 6 inches down each side. Next time, I'll overlap the strips to be a bit more even. 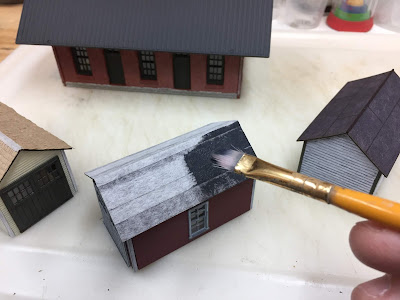 Once that's done, you can paint the tape with regular acrylics, or whatever else you like. Randy uses a rattle can of Rustoleum black primer. I just brushed on my "grimy black" craft paint (at $.50/ bottle, it's a bargain). 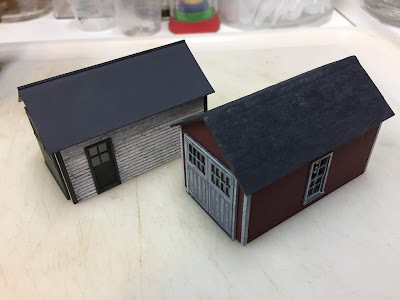 I painted the other roof - which was just the cardstock that came with the kit - with the same paint for comparison. Even with no weathering yet, I think you'll agree that the roof with the medical tape came out MUCH better (as always, you can click on the photo for a closer view). I can't wait to hit this with some chalks and PanPastels - I think the texture will really stand out and grab the colors.

So that's a little tip, by way of my buddy Randy, and just a quick glance into what I've been working on lately. Hope to have a more about these garages posted soon. In the meantime, I hope you'll try using medical tape for tarpaper roofing - and if you do, let us know!
Posted by Chris Adams at 12:01 AM