Today's post qualifies as a "Throwback Thursday" since these photos were taken a bit ago, but - as I mentioned in my last post - I'm just now getting around to posting them. Since a "blog" is a web-log of my layout's progress, I figure it's never too late to do an update. At least it's getting chronicled here. Having said that though, I am trying to catch up so that my posts are more real-time.

Now that things are really starting to shape up at the end of the Berlin Branch, it's time to turn my focus to the main scenic feature of that line - the crossing of the Mattabesett River.

For the longest time, the area looked like this: 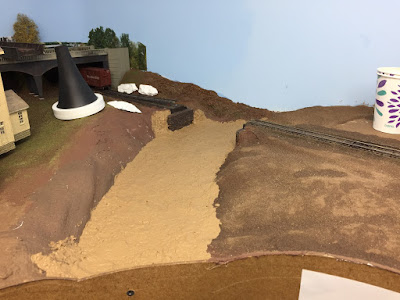 The bridge has been in place for ops sessions, but it had to be removed to work on the area. So, for the time being (and still, as of today AAMOF), the Berlin Branch is OOS. 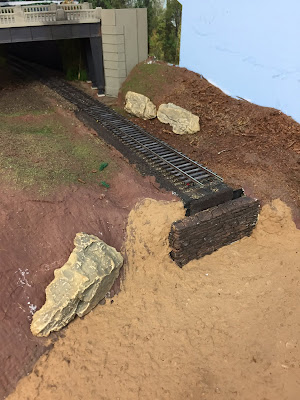 First step was to try my  hand at coloring those white hydrocal rock castings I got from Pete. In the first photo, you see that I chose them for their shape and how they'd look in the scene. In the photo above, you see the results of my coloring effort. Nothing innovative here - I just followed the tried&true Woodland Scenics technique of "leopard spotting" different colors with a sponge brush.


Even with this left-brained recipe, the technique is still decidedly right-brained. You just keep at it until it looks "right." I got a few compliments on the rocks at the next ops session, so I think they must look right to at least a couple other folks than just me. So I'll take that as a win. 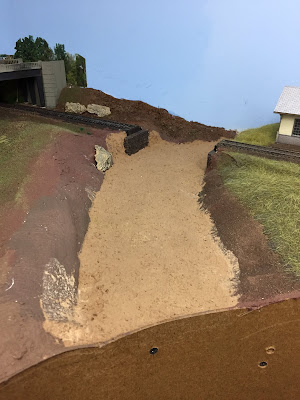 Once I placed the rocks where I wanted them, I needed to focus on the river and banks. 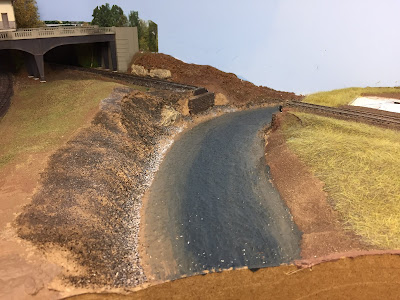 This was a (dare I say "fun?") multi-step process of using ground goop to "plant" the rocks, then applying various colors and textures over the goop (mostly ground up leaves, with some fine "burnt grass" ground foam mixed in as well). I fixed this all in place with pipettes of diluted glue, and misted with 70% IPA.

Somewhere in there I also painted the river itself using my main dirt color as well as some black (actually, "grimy black" - yes, I had a quart of latex paint colored to match the PollyS color). The technique I used is one I read about where you use one brush and dip in into one color, brush it on, then dip the brush in the other color, and brush it on, blending the two together as you go.

Longtime readers know I'm definitely too left-brained to have much artistic ability, but I was really psyched at how easy this technique was and how effective the result - it's amazing that it actually looks like there's some depth there, with the banks fading "down into" the water. Well, at least it looks that way to my eye. 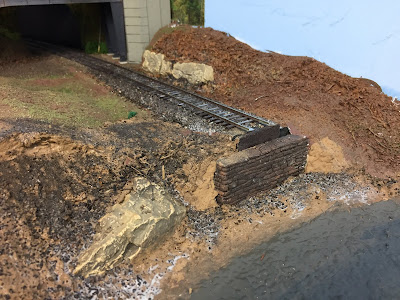 To be honest, the process here went over more than just a few days. I'd add some color & texture, fix it in place, then wait until the next day to (re)evaluate things and add more color & texture, building it up as I went. On the one hand, I found the process very enjoyable. On the other hand, I sometimes found it harrowing (my favorite word lately, apparently) since I knew I needed to continue the process but didn't want to risk messing up what I'd already done. 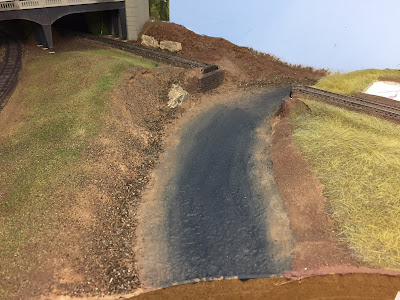 Case in point was the river itself. Though I really liked how the blending effect had come out, it looked a bit too even/perfect (I think The Missus actually said it looked like a road). So out came the paints again - and this time, I "unevened" the banks a bit. 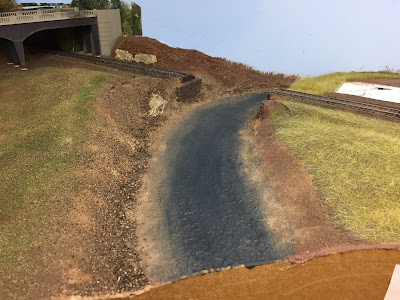 And in conjunction with that, I also added some uneven texture along the banks to help the effect.

The area's really shaping up - and definitely looks a WHOLE lot better than it did when I started. That's not saying too much, I know, but more than a few mentors have told me "it's just scenery, you can't mess it up" and while I don't quite believe them yet, it's turning out to be true. So far at least.
Posted by Chris Adams at 12:01 AM