In all the hubbub of the Holidays, I'm afraid this here blog has gone onto the back burner a little bit. But that's not for lack of activity on the Valley Line, no sir! I have a bunch of progress to report here - if only to document it for myself (the "log" part of "blog"). So, in no particular order really, I'll start off with some bumping posts.

One of the things I noticed right away when doing scenery in East Berlin (wow - it's been since end-of-August that I reported progress from there. Need to update you on that soon!) is that I need at least one bumping post - if only to keep cars from falling off the end of the track and onto the floor!

Here are a couple of prototype photos of what I have in mind for this spot: 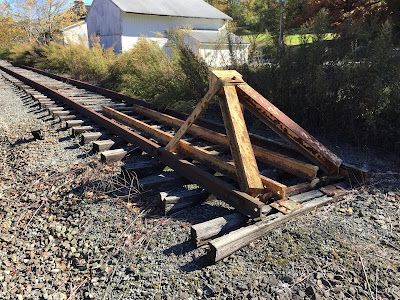 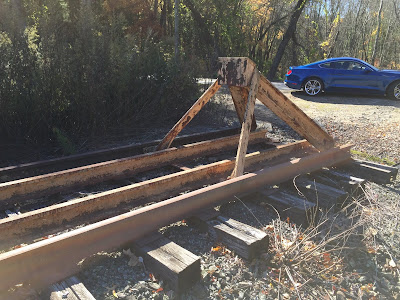 I saw this while The Missus and I were on a fall roadtrip up to Putnam, CT.

Now, there are many options when it comes to bumping posts - and I even had a couple different ones on-hand. 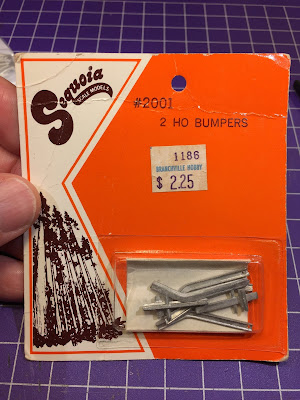 First was a package of old Sequoia bumpers. I don't even remember when or how I got them (or if they're even produced any more), but I figured I'd at least see whether they'd fit the bill. 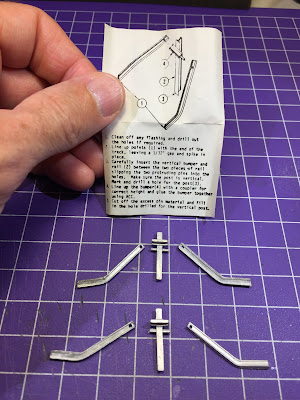 As you can see, they're a white metal kit. Nice for durability, but they look a bit fussy to assemble. But the deal-breaker was that they didn't really look like what I was after. 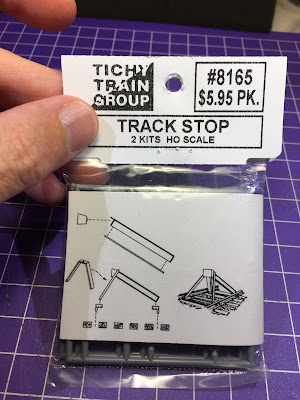 Fortunately, I also had on-hand a pair of Tichy bumpers (a.k.a. "track stops"). And I know if I need more, they're still available and pretty common at local hobby shops. 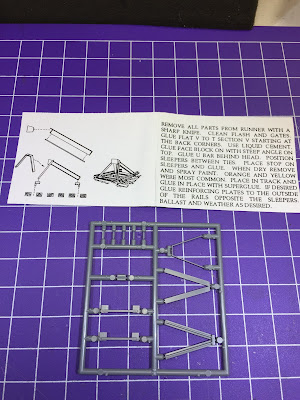 They're also in kit form, but cast in styrene so assembly - while a little finicky - is pretty straightforward and easy to do with some liquid plastic cement.

After reviewing the instructions, the first step was to remove the parts from the sprue and remove any molding/parting lines and gate nubs with a file and sanding sticks. 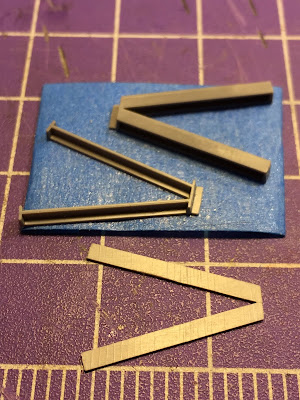 To make the "I-beam" look on the main legs, you have to add a flat piece on top. I found it helpful to put the main legs onto a piece of tape to hold it in place. Then I applied cement sparingly on the narrow verticals, then added the flat piece with tweezers, centering as the glue set. You can see a completed piece at the upper right. 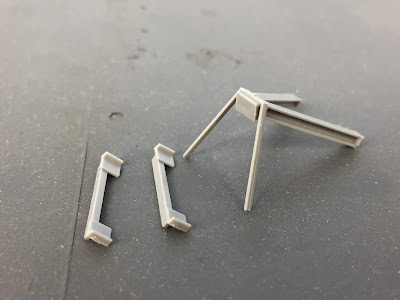 Once that was done, I added the other two legs - basically a "strap" that goes around the top of the main bumper, as above. The other two parts in this photo become the base. 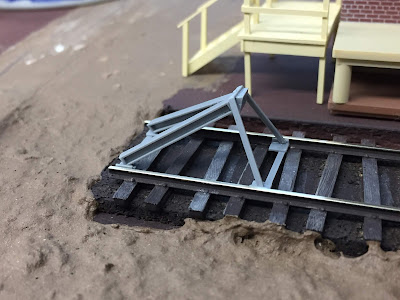 I found locating and affixing the base parts to be the most finicky step in assembly. They have to be located just right in order to nest properly between the ties. And that's made a bit more challenging if you, as I did, angle your ties slightly to represent little-maintained siding track.

Also, there isn't much gluing surface - especially between the front legs and the base. But thankfully being styrene, the cement really takes hold. I wouldn't go banging into them really hard with a locomotive (nor would the prototype!), but they should be sturdy enough with regular freight cars. 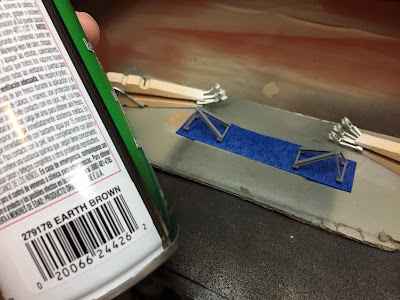 The penultimate step before installing them on the layout is to hit them with some paint. I used Krylon Camouflage "Earth Brown" as the base and held the parts in place with tape. While I was at it, I also painted some Hayes wheels stops I had on-hand, held with reversed clothespins. 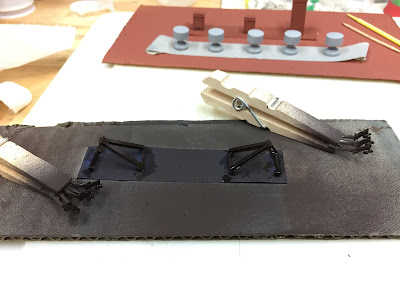 And here they are, waiting for the final step - weathering. I'll use some rusty chalks & pan pastels to do that. Should make them look all nicely worn and a bit rusty.

Bumping posts are not only practical - keeping your rolling stock from bounding across the landscape, or - worse- off the edge of the earth to the concrete floor - but building little details like this is a really easy way to have a nice stress-free evening at the hobby bench. If you have 15-30 minutes to spare, and are of the philosophy that "even a little progress is steady progress", I hope you'll put some of these together. Even better if you've learned a few tips from this post along the way!
Posted by Chris Adams at 11:40 AM