I'm a big fan of Mike Rose, despite the fact that his chosen modeling era and locale are so different from mine. One of the things we have in common though (other than bike-riding-as-therapy) is that we tend to work in bursts. He often says something along the lines of - "when you're in the flow and  have a wave of motivation going, ride that wave as hard as you can for as long as you can."

Now, I'm not nearly as productive as he is when he's in that state, but I feel the same way. And I'm riding one of those waves lately. I'm not making HUGE progress, but I'm making definite progress on a number of fronts (thanks in no small part to some help from Bill and Dave as well).

One of those fronts is the Rt. 15 Overpass, which got a substantial kick-start at the beginning of the month when I got the start of the abutments in the mail from Dave. I've been trying to get the overpass finished by this weekend - or at least by the end of this month - so every time I have a quarter-hour or more, I do another little bit.

Here are some of those bits: 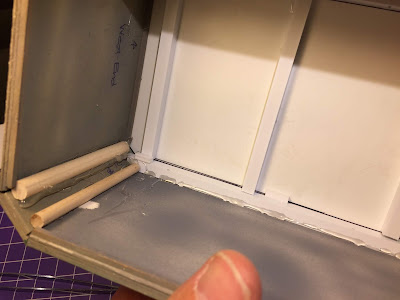 When I dry-fit the roadway, I noticed that - somehow - one of the side supports had "drooped" a little. If I secured the roadway to it, it would have ended up a little skewed. So, I tack-glued the roadway to the good/level side and saw where the (now braced) roadway would end up on the other side. Then - as you can see above - I glued little bits of .060" square strip to the side support and the underside of the road and cross brace to secure it. Time: approx 15 mins 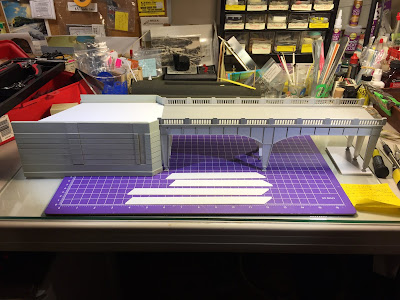 Next, I cut the pieces that would become the curbing/sidewalk along the sides of the roadway. I needed to laminate together two courses of sheet styrene, cut to size, since I didn't have any .090" sheet styrene on-hand - only .040". I figure nobody will notice the .010" difference from 4 feet away. Hope I'm right. 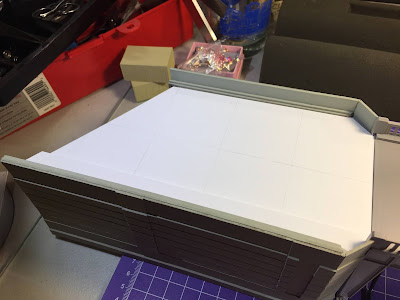 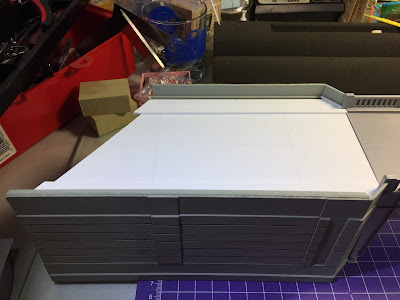 Other sidewalk/curb installed, along with a short piece of .060" square strip to continue the "step" along the parapet. Notice the gap/notch at the left end of the roadway. I'd need to fill that so there won't be a gap where this buts up against the backdrop. 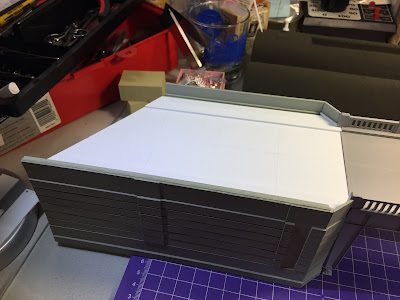 Total time: 2 hours (since I have to do so much thinking, I work SO slowly. But hopefully I'll speed up as my experience/skill grows. I have to remember that I'm mostly scratchbuilding here...) 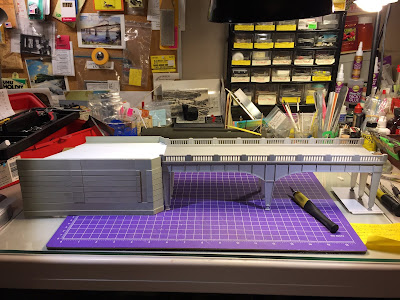 Another in-progress photo, just cuz it's looking so cool :^)

Now that the left abutment is essentially done (except for painting/weathering), I needed to focus on the right-end abutment. When I placed & positioned the bridge on the layout, I discovered that the angle at which I thought the right abutment would hit the wall was a bit off. Like by 1/2"!

So, I needed to extend the side wall by that much so there would be no gap - and also so the bit of roadway I need to install on top of this abutment will match. 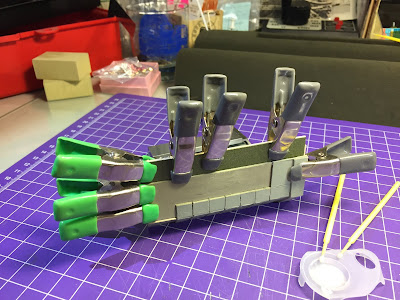 Again, it took me some time to think through how I wanted to approach this and what materials to use, but finally settled on an extension of more fiberboard & a splice, all secured with white glue. Heh - and clamped, as you can see above. Total time: 45 minutes (included mockup, diagnosis, and fix).

Another one of my mentors, Tony Koester, mentions keeping what I think he calls a "15 minute box" which contains small projects you can do in just 15 minutes to keep making progress on the layout. Now, I don't have such a box (not yet, anyway), but the philosophy goes right along with what I've been saying about taking small bites of the elephant.

That's all fairly standard project management. The challenge I've found, though, is figuring out just what small bites to take. Where do you start? Fortunately, I've discovered that this overpass project lends itself pretty readily to small steps that each take only a short amount of time, but all of which - over time - are resulting in a pretty cool, and unique, model.