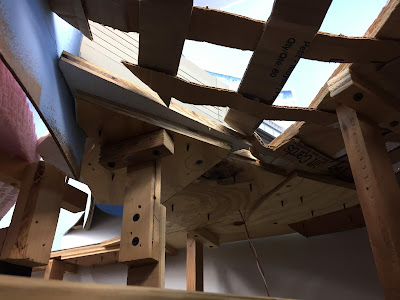 "If you have built castles in the air, your work need not be lost;
that is where they should be. Now put the foundations under them."
-Henry David Thoreau

As you may have guessed from last week's Wordless Wednesday, I've been making some significant progress on the Rt. 15 overpass (with a LOT of help from the parts Dave sent me). Actual modeling is one of the reasons my posts have been a bit infrequent lately. For the other reason, well, check out the bottom of this post. Things have been a bit busy 'round here lately.

So, what does this all have to do with our ol' friend Thoreau? Well, stay with me here...

Now that the overpass is nearing completion, I figured it was high time to set it in place on the layout to make doubly sure everything would fit as expected. You know, before I built any MORE of it (not that anybody's ever made that mistake before...but I digress). Well, good thing I did. Turned out, despite my best measurements, everything was a bit longer than I expected. But no worries, "all I have to do is" swing the whole thing a bit toward the aisle and it fits.

The West (left) abutment has precious little - which is to say, "almost nothing" - to rest on. Though made of concrete, an abutment isn't exactly a castle. But it still needs a foundation....

So I got to do some more of what I (apparently) enjoy most, and what - these days - I seldom get to do: Benchwork.

The photo above shows the new foundation/support, er, plywood - and the photo at the top of this post shows the foundation, under my castle abutment (which used to be) in the air.

Apparently, I've been bitten by the modeling bug lately cuz I even got back to my B&O P-11 flatcar project(!) I started this project back last September 22 (that's September of last year...). When last we saw it, I had just finished decaling/lettering it. And, between work and family stuff, that's where it's been for the last 9 months(!!).

Well, it was high time I got back to it. All I had left to do was the brake wheel and the uncoupling lift levers. Those levers had me stumped - until I saw this photo of the PRR car on which this car is based:
And Randy brought me some HO scale versions of such couplers:


Unfortunately, these things are tiny . . .

And, they're in two pieces that need to be bent & assembled. Ugh! Well, fortunately, the Modeling Bug persists, so I'll press on - but the details will be in the next post.

* * *
So much for the first reason why posts have been a bit lax lately. The other reason is that the Missus and I have been working toward a Leukemia & Lymphoma Society fundraiser which we're participating in this Thursday in support of her dad.

Long-time readers know that 2018 hasn't been kind to our dads. My dad had a heart attack and a quadruple bypass in early February, and about the same time Deb's dad found out cancer had come back - for the third time. Fortunately, my dad's doing great. Deb's dad - Rich - a bit less so. He was in the hospital for 3 months for treatment and then came home. Now he's going through 3 more rounds. He's hanging in there, but we're trying to do what we can for him.

Thus, the fundraiser to support research for the types of cancer he has. If you're interested in learning more about our effort click here and here. And if you're able to support the L&LS Light the Night cancer walk we're doing, thank you SO much!
Posted by Chris Adams at 12:01 AM