Happy Labor Day! While this holiday weekend marks the unofficial end of summer, being a "glass-half-full" kinda guy, I prefer to focus on its being the unofficial beginning of Model Railroad Season!

August ended up being very busy with my family visiting and Deb's dad continuing his fight against cancer. After the news we got earlier in the month, we'd planned on his going back in the hospital for a week before continuing treatments at home. Unfortunately, "week" turned into "weeks" and he's actually still in the hospital. Though we're hoping & praying he can finally come home in a few days.

With all the family-related stuff, I've been a little out of the hobby over the past bunch of weeks and am just now starting to get back into it a bit. That started with catching up with my favorite model railroad "e-zine" Model Railroad Hobbyist. I hadn't looked at it since my article appeared in the July issue, so I was pleasantly surprised to discover the article ratings that were published in the August issue: 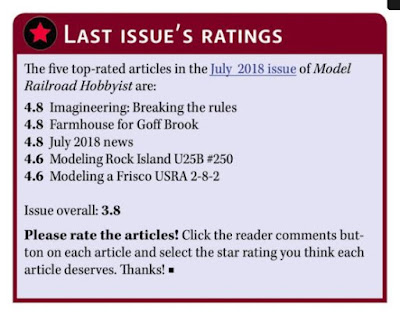 There on page 22, I found out that my Goff Brook Farmhouse article had made the top-5 rated articles! Thank you so much to all of you that took the time to rate my article - I'm really psyched you liked it and it's really great for a writer to get such encouraging feedback. So thank you!

But the surprises didn't end there - as I finished up the September issue, I discovered this little tidbit in the "Coming Next Month..." section: 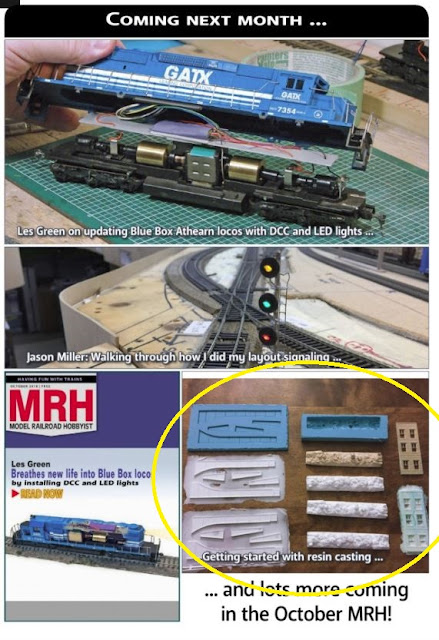 Talk about being out of the loop for a bit! Long-time readers will recognize that as one of the pics from my posts on resin casting. I reworked them into an article for MRH and it looks like it'll be published next month! Very cool!

You may recall that the reason I even got into resin casting was so that I could make some copies of a master set of girders for my model of the Rt. 15 Overpass. Well, with everything going on lately, progress has been glacial, but I'm happy to report that I'm finally getting around to assembling the girders. 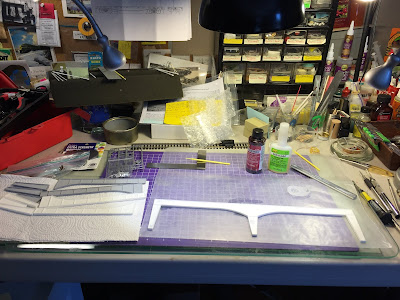 Good thing too - my friend DaveM has graciously agreed to help me with the abutments (and by "help" I mean he's doing them entirely(!)), but before proceeding we (he) really need to know exactly what their dimensions will be. And that requires that the bridge itself be in as final a state as possible in order to determine all the measurements. I hope my next post will go into that a little bit.

Finally, I was able to get down to the grade crossing this past Saturday morning for the penultimate Saybrook Special of the 2018 season. Unfortunately, the video (included below FWIW) came out sideways. I used to be able to easily rotate it in YouTube, but apparently YouTube no longer allows that. Google searches for "How do I rotate a video in YouTube" all pointed me to directions for how to do it in the old version of YT. Sigh. Won't make that mistake again.

Here's hoping that you're able to enjoy these last days of summer and, especially, these first few days of Model Railroad Season! As family stuff hopefully calms down a bit, I look forward to joining you and sharing some more progress on the Valley Line!