Ok, that was a little bit of a fail. That's what I get for not making sure that there's enough room on the phone for an actual helpful-length video. Since I don't want to leave you in SUSPENSE! suffice it to say that I was able to get the rubber mold out of the foamcore box. And here's what I had: 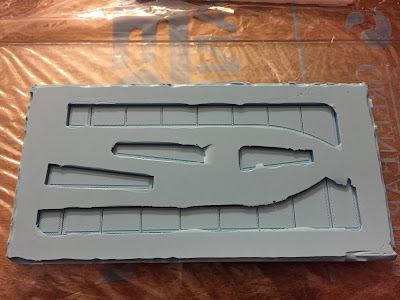 Not too bad - but I still got some seepage of rubber underneath the masters, despite running a bead of glue around the perimeter of each part. Next time, I'll make sure that the glue seeps out just a little around the edges - that should seal things nicely. 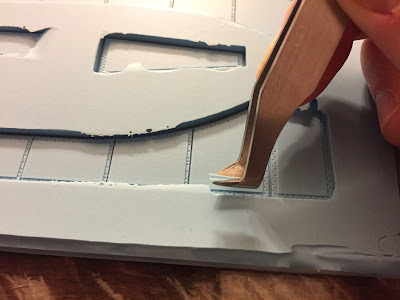 But that's next time. For now, I had some trimming to do. And, after trying even a sharp x-acto, I came up with the perfect solution - sprue nippers! As you can see above, they're straight and flush-cut ting. Just what I needed to go around trim off the extra rubber "flash." 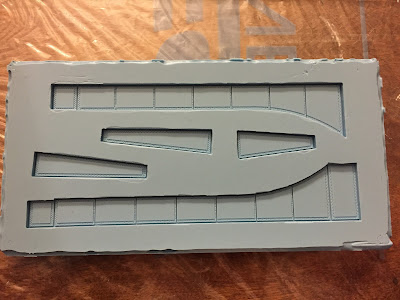 Compare this photo with the "before" shot above, and I think you'll agree that the nippers worked great.

Next step was to mix and pour the resin. Click here for the details. 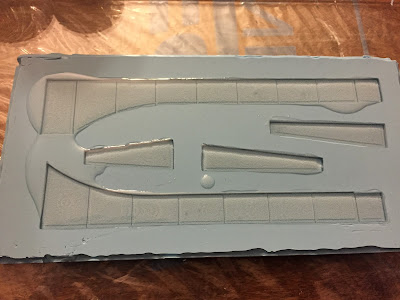 As before, I mixed the Parts A & B in equal measures together, then slowly poured into the mold doing my best to avoid bubbles. And - important (as I discovered later) - be sure to "overfill" the mold slightly. 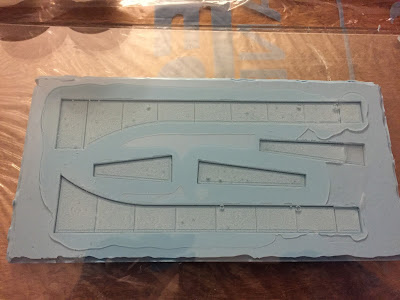 Next, cover with acetate or plate glass/plexiglass to keep the backs of the castings flat. As you can see, a few bubbles resulted. I'm not sure yet how to avoid that and decided they didn't matter since they'd be on the back of the castings anyway. 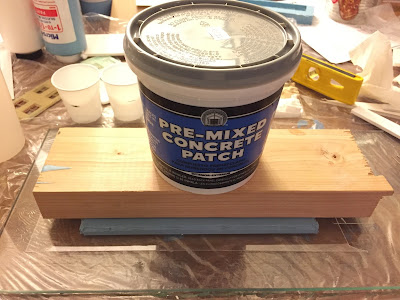 Lastly, weigh it all down. I think that'll help a bit with the bubbles but we'll see. 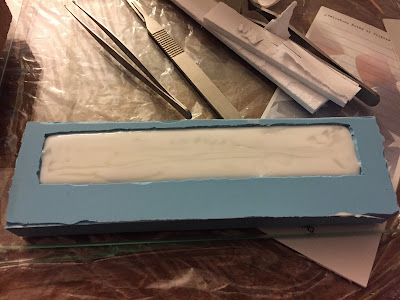 It turned out that I ended up mixing a bit more resin than I needed and it had actually started to cure ever so slightly in the mixing cup. So I did an experiment and quickly poured the rest of it all into the gondola load mold I'd made before. Just a quick & dirty pour - and I didn't even bother with acetate or a weight. 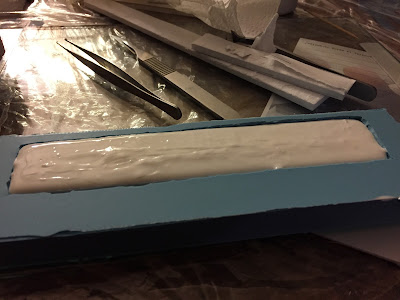 And this is what you end up with (above). A very non-flat surface that's not only very uneven, but slightly humped. No matter though. Because: test. 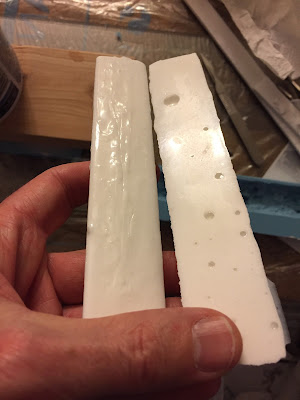 This comparison shows you the difference the acetate/weight will make. Sure, the casting on the left has no bubble voids, but the casting on the right doesn't require lots of sanding to get everything flat and flush (though you may want to putty the holes - not really necessary on a gondola load).

So now I'll wait overnight to see how my *important* (i.e. "not test") castings come out. Since I've done a bit of practice, I've become much less intimidated by the whole casting process. At least I've cleared a lot of the fog for myself and removed some of the mystery. Hopefully that bodes well for what I hope will be some really nice girder pieces for the Rt. 15 overpass in Wethersfield.
Posted by Chris Adams at 12:01 AM