A Washboard - On the Valley Line Today

The other day I happened to be home when I heard an engine from the local railroad ("local" as in "through my backyard" - literally) blowing for the grade crossing at my street. I'm ashamed to admit that, while this is still a relatively rare occurrence this far south, I didn't bother running down the street to see it. I thought it was just a light engine move - perhaps HOTT - but I was wrong. 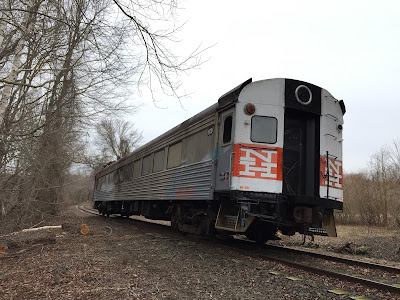 Turns out, the railroad was moving a "Washboard" - a former New Haven MU coach - down to the interchange for pickup. It would have made a pretty cool video, seeing it go over the crossing - especially since these cars ran only in the Electrified Zone between New Haven and NYC during the 1950s through the mid-1970s. I'll let others who are more knowledgeable on the West End weigh in with the particulars, but I think they were first delivered to the railroad around 1954 to replace multiple-unit electric coaches that had been around since at least the 1931 and earlier (some were still around from the 1909 delivery). I remember seeing them at Devon, CT around 1983, but I don't think they were in revenue service (IIRC, they were on a work/wire train). Unfortunately, I never rode in one. 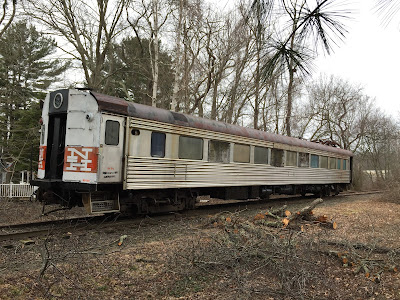 But it was cool seeing an original piece of New Haven equipment still in its original paint - including intact stainless steel letterboard. 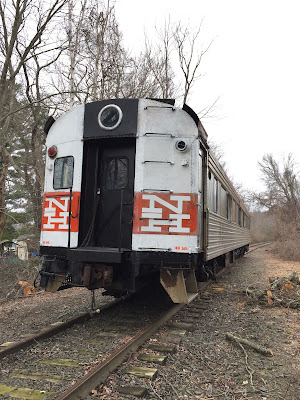 And having it go through my backyard and sit down at the interchange long enough for me to catch a few photos was a special - and very unexpected - treat. Here's wishing it a good future with a new owner that can restore it to its former glory. It was nice having it visit for a bit.