So, as things typically happen lately, I got distracted by work/life and am only just now getting around to sharing the result of the castings I poured over a week ago. And this time, I actually had enough room on my iPhone to shoot a proper video. Well - I don't know how "proper" but at least it didn't get cut off this time. . .


I'll never become a YouTuber, but let me know if you've been enjoying the videos and/or finding them helpful. If a picture is worth a thousand words, a video's gotta be worth even more. And it saves a lot of typing :^) And - bonus! - you actually get to see in kinda-real-time how things are working (or not - that's the joy of a "live" video). 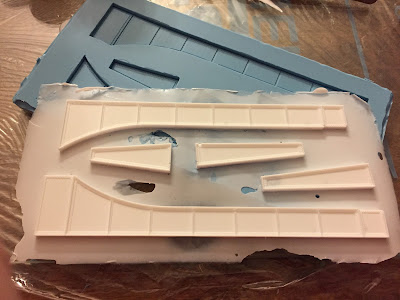 But this is a blog after all, so here are some detail shots of the castings that I got. I don't know if I had beginner's luck or not, but I think they came out really well. 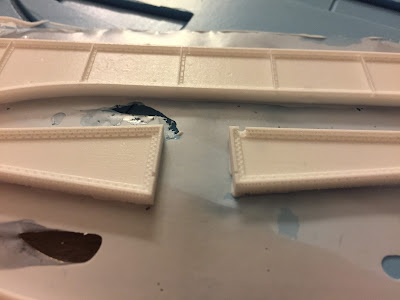 Unfortunately, there must have been some bubbling along a few of the girder edges though. You can see above what look like "chips" that broke off. Nope - that's how the casting came out. Should be a relatively simple matter of filling them in with either putty or strip styrene. I'll letcha know (or I might not even bother, since these will literally be painted black and put under a bridge back next to the backdrop...) 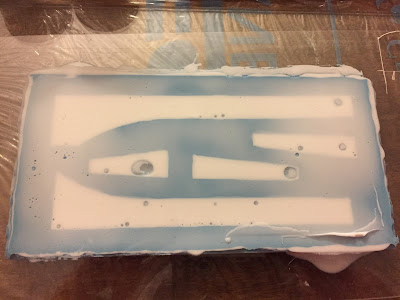 Remember that beginner's luck I mentioned? Well, it wore off a bit with the second pour I did. My main mistake here was not overfilling the mold with the resin pour. As a result a lot of air - and thus, bubbles - got trapped under the acetate.  Even WORSE - I tried to fix things by lifting the acetate up and smoothing the bubbles out. Big Mistake - that really just made things worse and created more bubbles. I would have been better off just placing the acetate,leaving it alone, and seeing what I ended up with, come what may.

Note to self: Always overfill the mold. 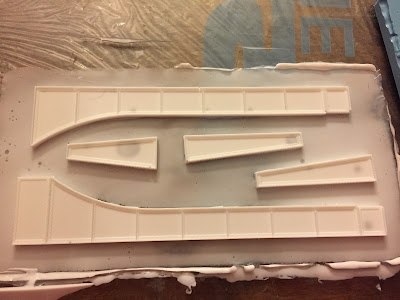 So, as I mentioned on the video, turns out I really only need two sets of girders in addition to the masters in order to have enough for the Rt. 15 overpass. But for that plan to work, I needed to be able to free the masters . . .

If you can remember waaaaay back when I first started this a couple weeks ago, I mentioned that I used some Aileen's to glue the masters onto the base of the foamcore box. Well, while it did take a bit more time than I expected, a soak in water did eventually allow me to carefully peel them off. 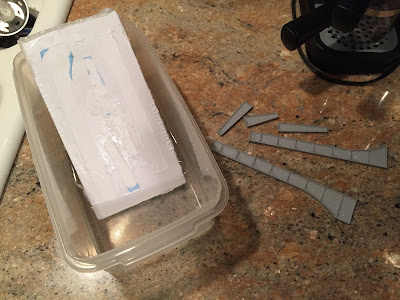 And there wasn't even any residue! Certainly no damage to the masters, which of course is awesome. I'll be sure to wash all the pieces thoroughly before painting though. 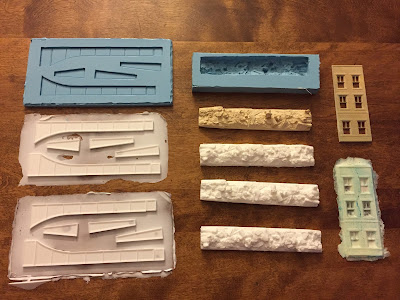 And that's it! At least for now, my resin casting efforts are going to take a back seat while I focus on some other things. Busy days at work will be ending in a few weeks and I've been immersed in shopping for a new car (mine just turned 180k and the Missus' car just turn 245k!). Unfortunately, my FIL is still in the hospital, but doing ok all things considered. It's just a long road. Thanks for your continued thoughts and prayers. 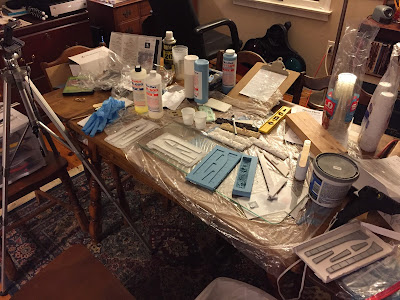 Before I do anything else though, I really REALLY need to clean up this mess %^)

****************
Thanks to all of you that attended the NMRA Nutmeg Division meeting yesterday and hung around for my presentation on Operating the Valley Line. You were a great audience and I got some good feedback that'll help me improve it for the upcoming NEPROTO Meet. Hope to see you there!
Posted by Chris Adams at 12:01 AM