"Be careful what you wish for."

Like most model railroaders, I for a long time wished for more space for more railroad and I'm truly blessed to have a full basement to give the Valley Line (and the Airline, um, and the Shoreline) its due. And - even better - after wishing for a good crew of friends to help me with regular operating sessions, I have the best, most enthusiastic group of guys helping support my effort.

So I've been able to have regular operating sessions on a (fairly) large layout. And it's just as much a blast as I'd always hoped it would be. But . . . there is a downside. An ever so tiny cloud way out on the horizon of an otherwise clear blue sky. It doesn't look anything like a bunny, or a sheep. It's a funny-shaped, long, skinny cloud and actually looks a little bit like a word . . . I can barely make it out . . .ah yes -

It's one of the few things that can dampen your model railroad enthusiasm - and the larger the layout, the larger this cloud can be. But just like clouds bring much-needed rain, regular maintenance is necessary to keep your railroad healthy and happy. There's nothing like a good operating session to make those clouds pop up. And the best thing you can do to keep the rain off your parade (of trains) is to keep up with the maintenance and regularly work through your punch list of issues.

So that's how I spent my hobby time this past weekend - working through the punch list created after last month's session.

After snipping off some more KD "air hoses" and re-aligning/clamping the liftout between Somerset and Mill Hollow, I decided to figure out why the Airline local derailed on its way back from Middletown. Of course, the derailment happened on the only almost-inaccessible track on the entire railroad. 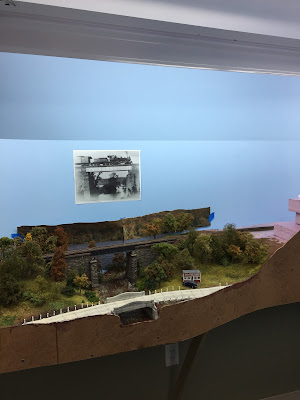 Yup, the track between Middletown and Mill Hollow on the Airline is tucked back behind the backdrop at Shailerville bridge. See pic above. To even see that track, you have to stand on a tall, 2-step step stool - making sure to tuck in your shirt so it doesn't damage the scenery - and lean over carefully. When you do all that, you can finally see the track... 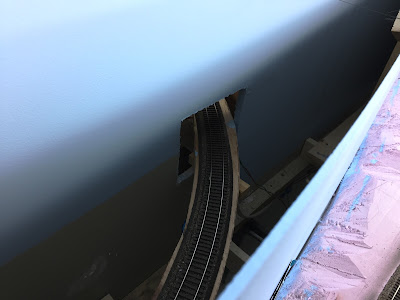 There it is - coming from Middletown, which is on the other side of the wall. Close observation may reveal the cause of the derailment (especially if you click to embiggen the photo) - one of the feeders had popped off and poked up! Naturally - the only feeder I've ever had fail (so far, anyway) had to fail in the worst possible place! I can't access it at all from underneath, so I had to try and (re)solder it from above.

Very fortunately, as it turned out, this wasn't as difficult as I'd feared. I fluxed the wire and the side of the rail (both had already been tinned from being soldered before) and I used a long bamboo skewer to press the wire against the rail. I had the skewer in one hand and the iron in the other. Presto! Feeder reconnected!

After cleaning off the flux with denatured alcohol (you do clean off flux, don't you?), filing the solder from the top of the rail, and Bright Boy-ing the area, I moved on to my next problem: the turnout for the Meech & Stoddard siding in Middletown, the one "powered" with a coathanger.

TomD had a lot of trouble when switching this siding - he couldn't get the points to swing all the way over very easily, and often had to apply constant pressure to keep cars from derailing. Once I got under the layout, I saw immediately what the problem was - the coathanger had slipped over toward the tube. Consequently, there was almost no travel - certainly not enough to actuate the points on the turnout. 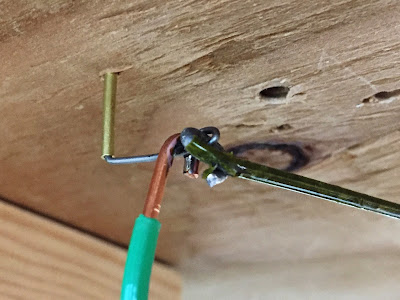 The solution ended up being simple in concept, but difficult to execute. I first bent the piano wire into a tight loop at the end - but even that wasn't enough to keep the coat hanger from creeping toward the tube over time (and the piano wire was a bear to bend in those tight quarters!). So I also soldered a scrap piece of copper wire as a "stop" to keep the coat hanger in place. It's certainly not an elegant solution, but it works. So far at least.

Another problem that crept up during the last session was the lack of bumping posts at the end of the east end staging tracks. When I redid this area a couple weeks ago, I installed nails at the end of each track. But that resulted in an unexpected problem - cars would actually couple to the nails!

So I went back, removed the nails, and did something more conventional and just as easy... 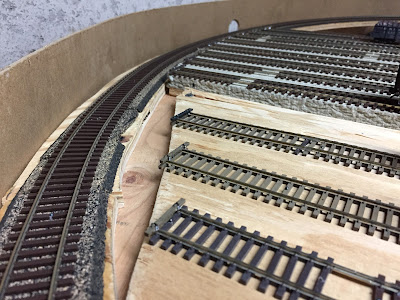 I used spare ties (you clip off a lot of them when laying flextrack) and glued them to the rails using drops of Aleen's Tacky Glue. Now there won't be any unexpected coupling and - bonus! - no possible damage to the couplers themselves. I should have just done it this way from the start. 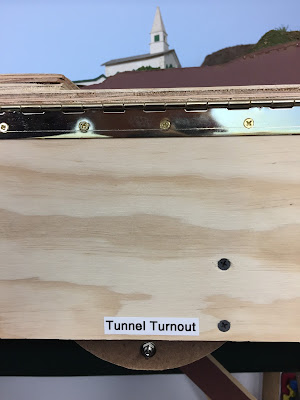 Sometimes, while going through the "known" problems on your punch list, other things occur to you along the way. Case in point - photo above. One of the persistent points made during ops session job briefings is to let the Airline local crew know how to actuate the turnout in the tunnel at Somerset. Well - duh! - I finally got around to just labeling the darn thing! Thanks to Roman for his labeler (I'm going to try - really hard - not to label everything in the house. This is not a something you should ever give to someone with OCD. It just enables them. Not that I'd know anything about that. Nope. Not me.) 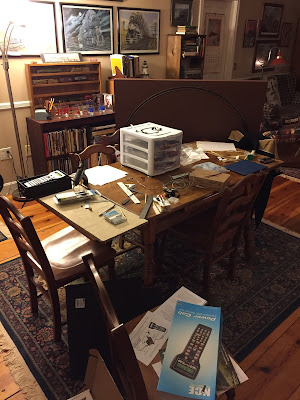 I still have a few items left on the list to do, but I think I'm going next to concentrate on finishing my little ProCab project. I really want to finish the mount/box - and really need to make sure the USB/Computer/PCB is working, um especially since it's already mounted in the box... And, of course, it'll be nice to get this mess cleaned up in time for the next NHRHTA Photo Archive session. But all in good time. These are just fun, little, puffy clouds. What more could you wish for?
Posted by Chris Adams at 3:05 PM