I mentioned recently that I got an NCE PowerCab as an additional throttle and to use for decoder programming at my workbench. And I've also posted some photos (here & here) of a little box I've been working on to store it all. Well, I just finished the box - so here's why and how I did it. 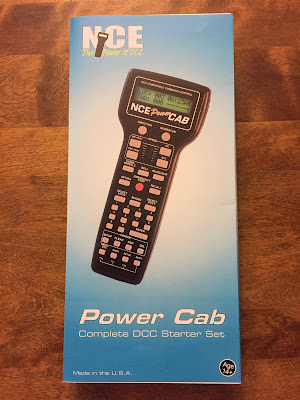 The PowerCab comes packaged in a nice box that stores all the components safely and conveniently. You have the PowerCab itself (the throttle, affectionately known as "the dogbone"), a plug-in panel, a power supply, and a flat cable to connect the throttle to the panel.

You can do as many folks do and store/transport your PowerCab system using this handy box - but what do you do when you want to connect your PowerCab to a computer to use JMRI for decoder programming, for example? You need to get the NCE USB PCB - and there's no handy place to store/transport that (and its associated cable) in the original box. Besides - who wants to go through the hassle of unpacking & connecting everything every time you want to use it?

So, I decided to make a new box that would store everything, be easy to transport, and already have the components mounted so all I'd have to do is plug everything in and I'd be up and running.

For a nice, professional look that would match my components, I used black foam core board from Staples. I'd considered masonite, but figured that would less convenient to work with (requiring drilling & sawing) and would need to be painted afterwards. Black foam core is already - ahem - black, and I could cut it easily with an xacto knife at the coffee table in my den.

The most difficult part of this project was deciding how big to make it. I figured the end would need only to be as big as the components that would be mounted on it, and the length would need to be long enough to hold the throttle. From there, it was easy - just measure and cut 4 sides and a lid (which later turned out to be the base) - and use hot glue to put it all together. 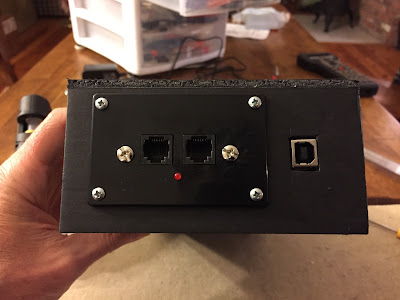 The photo above shows the plug-in panel and USB socket. I was surprised that the #4 sheet metal screws I used actually bit and held in the (relatively) thin foam core - but I hotglued the two screws I could get to for some extra insurance. Note that - in addition to the USB socket on the right, there are two RJ11 sockets on the panel. The left one is for the flat DCC system cable, and the right one is for a cab/throttle cable. 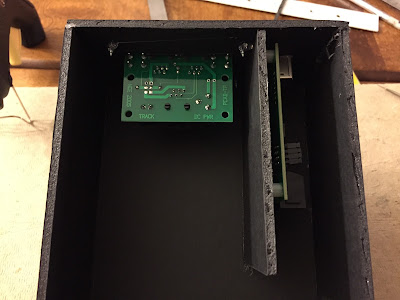 Here's a view inside the box. The plug-in panel is on the left and the USB PCB is on the right. I mounted the USB on a piece of foam core using hot glue and white spacers as you see above. I also determined how far "forward" to position the board so that the socket would protrude through the foam core enough to be flush with the front of the box (as you can see in the first photo). 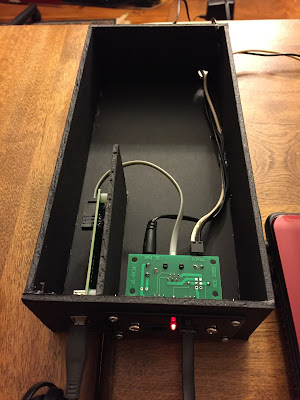 Another view inside the box after I connected the wires. PRO TIP: All the instructions for the USB board tell you to use the coiled throttle cable to connect it to the cab/throttle socket on the front of the plug-in panel. Well, once I discovered that there's another extra cab/throttle socket on the rear of the plug-in panel (thank you Erik), I decided to make my own, much shorter throttle cable using some spare phone cord (thanks to PeteL for loaning me the special crimping tool) which spared having to use the 6 foot coiled cable. I think you'll agree this is a much more elegant set-up.

Other than that new, gray wire, the other wires are for power supply (black) and track wires (black/white). To keep things neat (in case you haven't noticed, that's a "thing" with me), I used my handy hot glue gun to tuck & glue the wires into the corner of the box. They all go out through a hole cut in the rear. 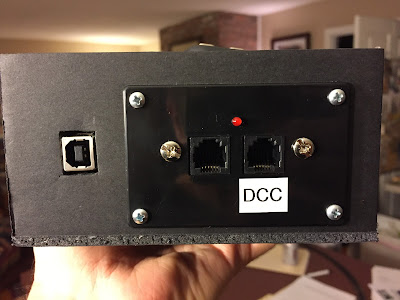 You may notice I've changed orientation here. While I initially conceived this box as having a "top" I could mount/rest the throttle on, I quickly discovered that it was much smarter to just use it as an open-top box: better for storage/transport and nothing would fall out. So the USB socket is now on the left, and the socket into which you plug the flat/DCC/PowerCab cable is labeled with that handy labeler I got from Roman. 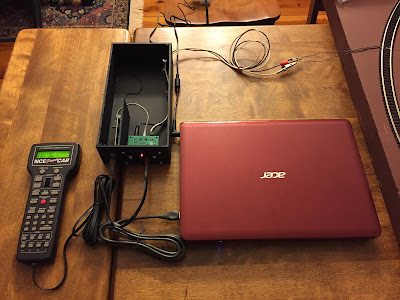 And here's the setup: PowerCab connected to front panel and power plugged in (note LED light and throttle screen are on), track wires connected to track feeders using alligator clips, and USB board connected to computer 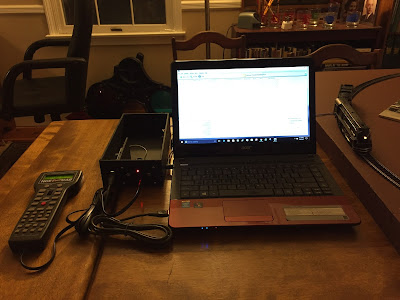 Another view showing how nice and neat everything is - all organized and together without wires going helter-skelter all over the place. 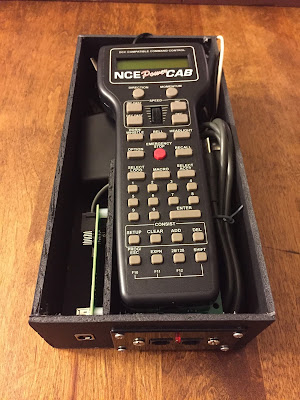 Once you're done, just disconnect the cords from the track, computer, and wall, disconnect the throttle, and tuck everything neatly away in the box. Pretty cool. The only thing I would have done differently is make the box deeper and add a hinged lid and latch (and maybe a little carry handle). But I don't plan on transporting this stuff too often so the way I have it now will work fine.

I hope you'll get some inspiration from this to make up your own storage/transport box. Using the foamcore and hotglue makes it a pretty easy, fun project. And if you do make one, be sure to let me know!

Now that I have such a cool setup, I was excited to connect it to JMRI and do some programming. Well, unfortunately, that ended up being a project in and of itself. The instructions weren't as complete or as clear as I'd hoped, and "Google help" just made things worse. But after lots of trial and error - as well as a few emails back and forth the the very patient Erik at Tony's Trains (where I purchase all my NCE stuff) - I was finally able to get everything up and running. Next time, I'll let you know what I learned and hopefully save you some trouble.
Posted by Chris Adams at 12:01 AM