I've been doing pretty good this year having operating sessions at least once per month - they're a great way to keep a high level of motivation and progress and, after the craziness of the last few weeks, I was glad that I'd scheduled the November session for the Thursday after Election Day. It was a nice change of pace - and with only a few regulars able to make it this time, the session was less formal and quicker to set up.

In fact, due to the number of guys I had I'd get to be on the crew for a change! Layout owners/hosts seldom have the chance to operate on their own railroad, so this was a special treat. But since the layout is so "scaleable" it was no problem. By that I mean, given my operating scheme, I can run the layout with as few as one or as many as 11-12 guys. All I had to do this time was forgo the mainline trains and one of the locals.


I decided on a 1949 session so I could rest the 278 and put the 0510 through its ESU/Full Throttle paces. Even more prototypically, in 1949 the lower Valley Line was served by the local coming from Cedar Hill Yard (New Haven). "New London" (staging) was/is out of service while I do some construction, so this worked out especially nice.


The session went smoothly, though I'm still trying to balance the work among the trains. The Air Line local (ably run solo by PeteL) was done much sooner than PDX-1 (Cedar Hill - East Haddam, crewed by MikeR and TomD), and HDX-7 The Valley Local (with RandyH as conductor and yours truly on the throttle) had its usual LARGE amount of work to do and took almost twice as long as the other trains. Of course, a 20 (twenty?!) car "local" will do that. And, if I was being true-to-prototype, there really wasn't that much traffic on the Valley Line by 1949. 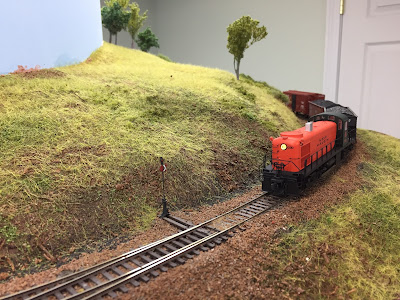 And RS-2s weren't used on the line either. Nevertheless, there's New Haven RR DERS-2b #510 coming southbound into Rocky Hill. Good thing my modeler's license is up-to-date! I really wanted to try ESU's new "Drive Hold" feature and play with all the different features/sounds of the Loksound decoder, and assigning the 510 to the Valley Local was just the ticket. I had a blast running it!

Since I was running a train, I had the guys go to the agent's desk themselves (sans agent, i.e. me) to get their switchlists when they arrived at each town. The crew on PDX-1 also had to take care of their own switches in Old Saybrook, but nobody seemed to mind. I think the more laid back pace was enjoyed by all.

Other than the joy of getting together with the guys and running trains, the other reason to have an ops session is to run the spreadsheet and further develop it. Mike has put in a tremendous amount of work making the "work producer" of our sessions ever more sophisticated. Since it essentially simulates all the car requests of the industry traffic agents, as well as all the work generated for the Agent-Operator, it's a very complicated product. But Mike seems to relish the challenge - and I'm all too willing to let him tackle it!

At the risk of jinxing something, the layout continues to operate (almost) flawlessly. We still have some persistent, random shorts - not always due to human error and very hard to replicate and track down. But as far as I can tell, they haven't at all diminished crew enthusiasm, being a minor annoyance at worst. And, speaking of shorts, I discovered that a 20 car local will bridge the gaps on the reversing section between Middletown and Wethersfield. I'll either move one of the gaps, or - at least for the short term - try shorter trains. Finally, Pete pointed out a track problem that was causing a couple of derailments. Thankfully, it was just the joint/gap on one end of the liftout between Somerset and Mill Hollow on the Air Line, likely due to seasonal shifting of the benchwork. Nothing a clamp won't solve.

With another session successfully ceased, we decided to let the 0510 take its now-22-car train on down from Hartford, south through Middletown, and over the Shailerville Bridge in Haddam. Thankfully, there was a railfan on hand to catch it...


Happy Weekend! Hope you're able to get to some model railroading - and if you do, tell us about it!
Posted by Chris Adams at 8:56 PM