When last we left the Alco DERS-2b project (click here for the previous posts), I was stuck on how to replace the pilot hand grabs: 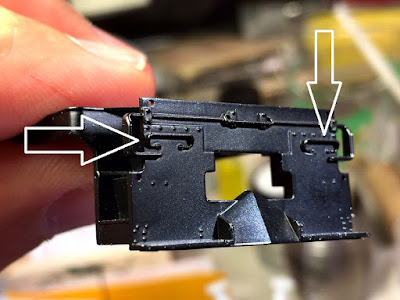 I figured I'd use the Detail Associates lift bars - despite the very unprototypical (for NH) mounting brackets - but the grabs had me stumped. I figured I'd have to make some sort of jig to bend wire, but decided to do some more layout construction instead. So the project sat on my bench for a couple weeks.

Then, as I was rummaging through some stuff looking for something else, I found this: 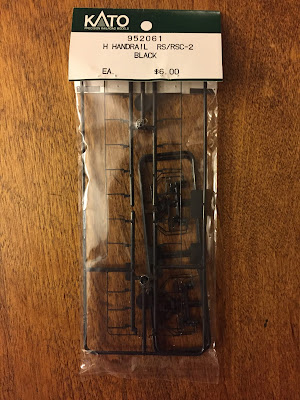 Yes, ladies and gentlemen, that is a FULL SET of RS-2 grabs, railings, and assorted details, brand-new in the package. According to the receipt I found with it, I purchased this way back in 2003 shortly after the Proto1000 RS-2 came out for the purpose of adding the details that the P1k model lacked. I wish I'd found this before I went to the trouble of bending all those body grabs.

While the wire does look much better than the plastic, I decided to check the package for those funky pilot grabs. Yup! They were included. BONUS: the coupler lift bars are included as well - and they have the correct mounting brackets. Although these details are plastic rather than wire, I can live with the extra few thousandths(?!) of an inch difference in thickness to save time & aggravation and to keep this project moving forward.

Before I could install the new details though, I had to remove the old. Since I wanted to preserve the rivets and NBW detail, this was a bit more difficult than I expected. Here's what I started with: 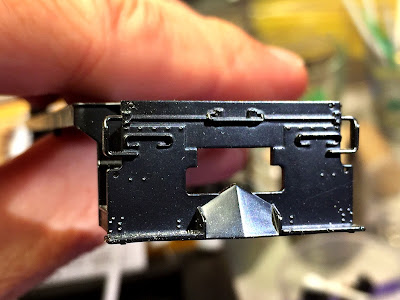 First step was to use my flush-cutting sprue nippers to cut away as much detail as I could. Then I went at it with my favorite chisel which worked well until I had to remove the grabs - that area was just too tight and narrow. 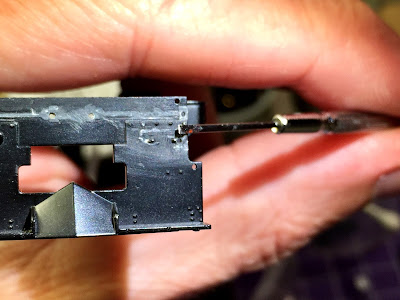 Since I have a number of cheap little screwdrivers, I decided to sacrifice one by filing the tip down to make a very narrow chisel, as you can see above. You have to take extra care to do a good job chiseling away detail, but with time and patience you'll get everything off. 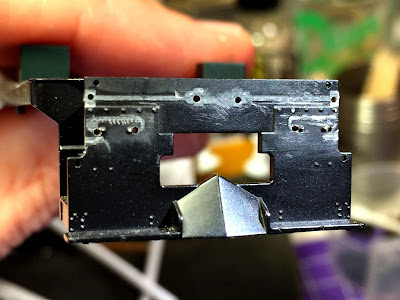 All the molded-on detail is now off, the rivets & NBW castings have survived, and holes have been drilled to accept the Kato details. 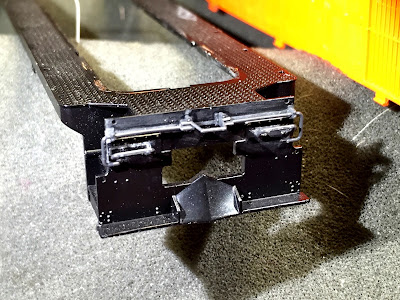 And here are said details press-fit into place (which is why the left grab is droopy). I wanted to test fit everything before figuring out how to route the MU pipes and where to locate the passenger car buffer.

MU pipes? Why, yes, I've decided to install MU capability just like on the prototype. Problem is, the part (Custom Finishing #347) is die cast metal and the end railings are likely delrin plastic. Not two materials that are likely to stick together.

Well, after much consideration and consultation with modeling buddies (including a suggestion to try and drill mounting holes and pin it all together - you know how tiny these parts are to try and drill?! %^), I decided to innovate a bit. 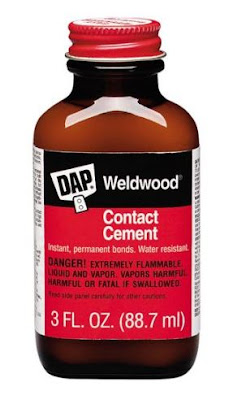 First, I taped the end railing down to wax paper to hold it in place and keep it from sticking to anything I didn't want it sticking to. Then I positioned the MU stand, noting where it would be touching the railings (primarily where the crosspieces touch inside of the railing's "V"). I had to file the crosspieces on the metal stand a bit to get things to fit snugly. 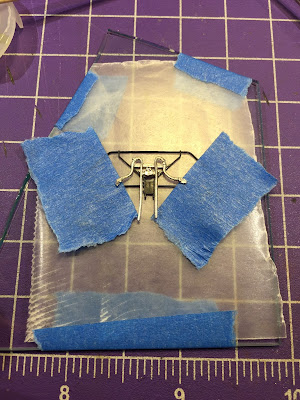 Then I put a large drop of contact cement in a water bottle cap and used a toothpick to apply it to the contact points on the railing and on the stand. Just a little will do - you don't want too much gooping up and looking nasty. Wait at least 15 minutes for the contact cement to set up, then carefully put the stand in place - as above. Since it's contact cement, you really have only one good try to get this right, so work slowly. 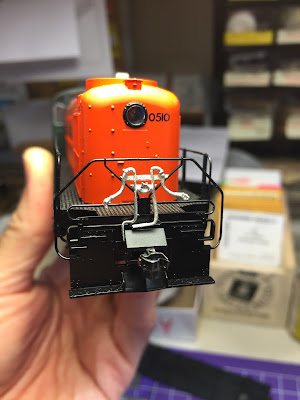 Once it's dry (I waited 24hrs, but that probably wasn't necessary), it forms a strong bond. How strong? Well, I haven't tried to separate the parts, but I can tell you that I bent the pipes (as above) while holding the stand/railings with my fingers and nothing broke free. So, so far so good.

Next, I wanted to tackle the chain guide for the hand brake. It's this part here:

There's one on each side of the prototype, at the short-hood end (where the brake wheel is). When you ratchet/apply the hand brake, it pulls on these chains which in turn pulls out the brake pistons which applies the brake shoes to the wheels. It's not a detail that's typically included on models, but once you know it's supposed to be there, you notice when it's not there. The parts I use are Custom Finishing #147.

While I don't have a dead-on side view of the RS-2, I deduced that the guide lines up underneath the handrail stanchion closest to the cab. The problem on the P1k RS-2 model, is where to actually mount the part. 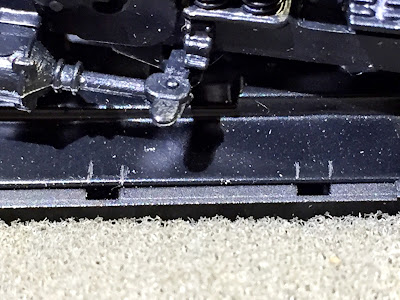 As you can see above, the "underside" of the frame on the model consists both of the model's metal frame and the plastic walkway. The notches above are in the plastic walkway and accommodate the tabs on the bottom of the handrail stanchions. The chain guide part is slightly wider than the walkway portion of the underframe, so you can't mount the part on the underside of the walkway (beside, that notch is too big). That would position the part too far "outboard" and, more importantly, you wouldn't be able to remove the walkway (the part would keep it from lifting off of the metal frame). So I decided to mount the part on the metal and marked the locations of the stanchion notches as you see above. 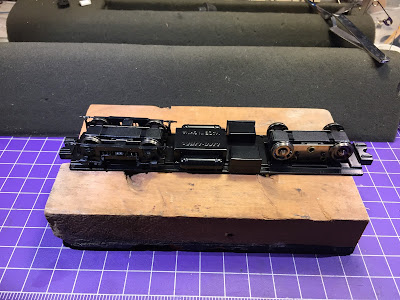 Before drilling the mounting hole, I got a couple of pieces of 2x2 to make a sturdy cradle for the engine. The side of the metal frame (that supports the walkways) just rests on the wood and keeps the delicate wires from resting on anything. See below: 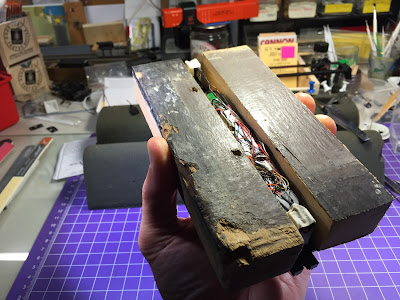 With a sturdy base, I marked and drilled the mounting hole, being careful to keep the bit lubricated with bar soap. Having a Dremel flex shaft and foot pedal control makes this job much easier. 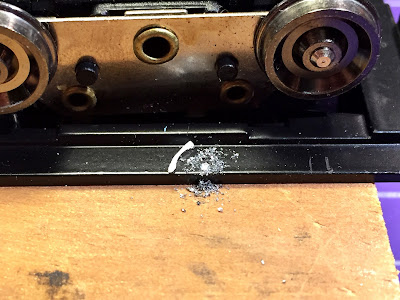 I drilled as close to the edge as I could, but it still positioned the part a little too far "inboard" for my taste. So I tried just notching the side in order to accommodate the mounting pin, but that left precious little contact surface for gluing - and the part kept just falling over and I couldn't figure out a way to hold it securely in place while any adhesive set up.

Speaking of adhesive: anybody ever try to solder a brass part to a metal (probably zamac?) frame? I don't think I'm going to try, but I'd sure like to know if anybody else has.

I finally settled on putting the part in the mounting hole that I'd drilled and decided to live with it being a couple thousandths inboard. I'll try to drill the other mounting hole even closer to the edge. 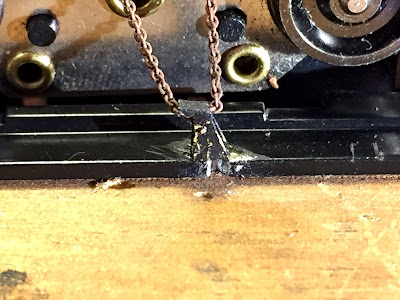 In the above photo, you can (hopefully) see the notch that I filed into the side - and that I didn't end up using. Also, the chain is A-Line 40 links per inch. The instructions for the part say that it's cored for 40lpi chain - don't believe them. I had to ream out the hole in order to get the chain to go through.

For adhesive, I decided to try Canopy Glue since I've heard from so many different folks (Scotty Mason, Mike Rose, etc) that it's a miracle adhesive. If it doesn't work for this application, I'll probably try contact cement again, but I'm certainly open to your suggestions for what to do here! 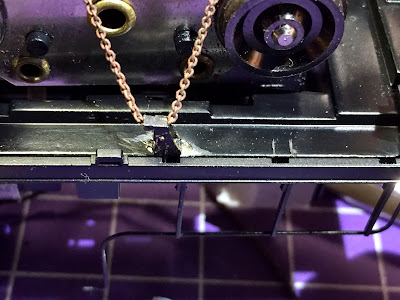 Photo above shows the walkway in place. Ideally, the chain guide would be centered over the joint between the walkway and frame. But it's already going to be sketchy keeping the guide from breaking off, so I want as much glue surface as possible. I'll be interested to see how it looks being so far inboard compared to the prototype.

I still have another part or two to mount before the chain guides are done - then I'll head back to the pilot itself and finalize the passenger car buffer position and glue all those end details in place. Oh - gotta get some hoses too (air, signal, steam).

Still hoping to have this project done in time for the next ops session, despite the recent pace.
Posted by Chris Adams at 8:19 AM