The Crew Call for the latest ops session resulted in full two-man crews for all four local freights, as well as a "Superintendent of Operations - Shoreline Division," and yours truly acting as General Superintendent, Tower Operator, Agent, and Dispatcher.

After all the crew members signed the Register, the next step was to have a job briefing and go over the latest Bulletin Order which contains any last-minute operational changes.

Once our briefing was over, it was time to hand out the paperwork for each train and fire up the Saybrook Tower control board and the fast clock.

Once everyone had a chance to review their paperwork and ensure that their trains contained the cars they should have, we fired up the throttles and started the clock.

The more we operate the more it's becoming apparent that Old Saybrook is a real hotbed of activity when the two locals are in town at the same time. We're not operating actual mainline trains as of yet, but the locals still need to get permission to foul the east and westbound mains so that makes things interesting. I think it took the two locals about 40 real minutes to sort out everything between themselves - which is actually about how long it took on the prototype. Unfortunately, the 4:1 fast clock made it "seem" like 2hrs & 20mins. Just another example of how even 1:87 scale switching is done in 1:1 time. Job cards will be a big help here (more on those below).

The Airline local had newly "upgraded" DERS-1b (Alco RS-1) #0669 as power this session. Bill downloaded the latest ESU "Full Throttle" functionality to this engine's stock decoder earlier in the week, so I our Motive Power Department decided he'd be the best one to try it out.

Unfortunately, the power used for the Valley Local (K-1b #287) is still having trouble keeping its rear tender truck on the rails when backing northbound between Shailerville bridge and Middletown. Since August 25, 1947 was a Monday, and the local isn't scheduled to go to East Haddam on Mondays, I figured we'd be ok. Unfortunately, the dispatcher gave HDX-7 orders to go to Haddam anyway to drop a few cars. Sure enough, when backing up the grade around the curve north of Shailerville - and despite an order to use Restricted Speed - the mogul derailed anyway. No harm done (though its having a Keep Alive keeps us on our toes) - just have to move it into the shop to get that truck fixed by next time.

Speaking of Haddam, the crew of PDX-2 finally got out of Saybrook and up to Haddam to do their switching there, including leaving cars for HDX-7. Unfortunately, they neglected to leave behind cars in Essex that weren't headed to Haddam or Deep River. Consequently, things got, um, a bit crowded in the sleepy river town of East Haddam...

And here comes the southbound Valley Local, heading onto the Shailerville Bridge... 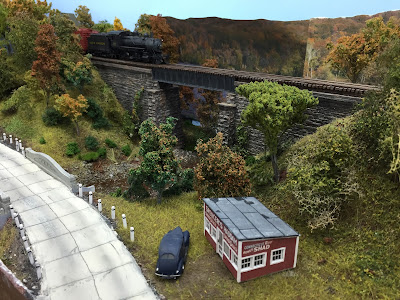 The mogul has no problem going forward - it's only backing up that hill and curve north of here that's the problem. She sure looks good though... 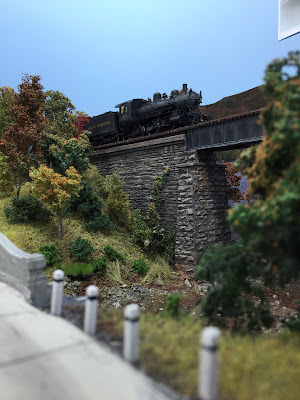 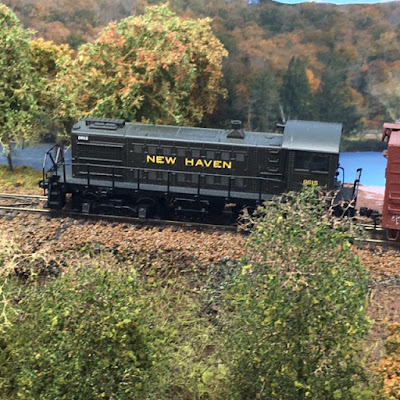 Now we see why they took the 0615 up to the bridge - looks like Pieter and his crew on the Haddam Local took some time to go down to the Shad Shack for lunch...

Once the two locals got their cars and left town, East Haddam resumed its slumber. Meanwhile, the town of Deep River was awakened by the sound of southbound PDX-2 switching the trailing point sidings...

All in all, we had another successful session and the Valley Local (HDX-7) didn't outlaw this time, despite going down-river to East Haddam. All the other trains seemed to work out well too. Just a couple of notable items though:

These observations, and others, prompted the following Punch List items for this session:
As I've said before, each operating session tends to highlight new things that need to be done, but hopefully - over time - the to-do list diminishes and the pure enjoyment of operating just continues to grow. And the more often you have ops sessions, the quicker that process occurs. If that isn't enough motivation for regular sessions, I'm not sure what is.