There's a lot of good advice out there that if you don't set aside some specific, regular time to work on a large project, you won't get as much done, if anything.  I'm nowhere near as disciplined as I'd like to be with time management, but at least when it comes to the Valley Local project I've set aside one evening per week as a regular worknight - call it "Train Time Tuesday."

Tonight's session was especially important since my next operating session is this Thursday and I still had a few "punch list" items to do.  So, right after dinner I headed to the basement.  When it comes to pre-ops-session worknights, it's best to prioritize operations-related items: dead tracks, inoperable turnouts, etc.  I'd staged the layout over the weekend & last Thursday before the guys came over for Photo Library night Randy temporarily fixed the south switch at Rocky Hill.  But I still had to power some sidings and fix a broken throttle. 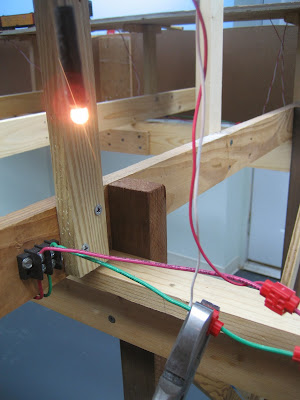 During the shake-down ops session, the sidings at the slaughterhouse in Middletown and the tank track at Dividend had decided to go dead.  The feeders had come unsoldered at the slaughterhouse, so that was just a matter of re-soldering them.  But both of the wires at the tank track seemed fine - all tightly attached, but there was still no power getting to one rail, the one with the white feeder wire.  As the photo above shows, the culprit ended up being a loose (or at least not-tight-enough) suitcase connector.  I clipped a test light to the track and squeezed the connector with a pair of pliers until the light came on bright and steady (see it shining in the pic).   Lesson: Dead tracks don't always mean the feeders need to be resoldered.

As I mentioned in my last post, one of my throttles took "shake down" literally and decided to take a header to the concrete floor during the last session.  Consequently, the antenna broke off - actually, the solder connecting the antenna connector to the PCB had broken.  So that connector needed to be resoldered and I figured while everything was apart anyway, I'd install a couple of lanyards to keep these throttles safe in the future. 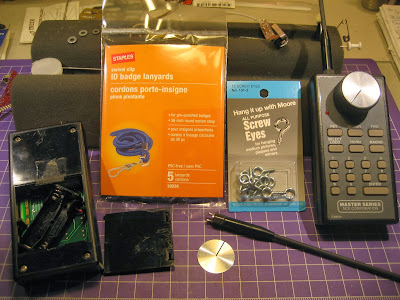 So I picked up a package of lanyards & some small screw eyes and went to work.

Four screws give you access to the inside - be careful since the two PCBs are connected with a wiring harness. 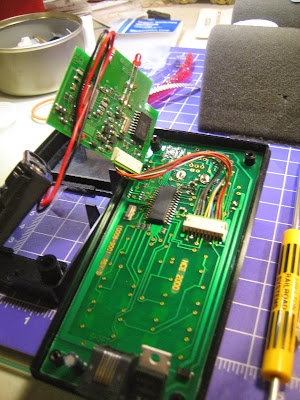 The PCBs﻿ are attached with double-sided foam tape so you can remove them with some care, though the smaller one is easier to remove (since the control knob isn't holding it in).  Bonus: the smaller one also has the antenna connector, which I needed to get to.  See above. 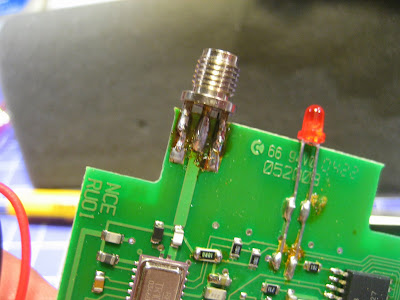 Here's a closeup of the antenna connector resoldered.  It ain't pretty, but at least I cleaned off the flux with denatured alcohol after this pic was taken.
﻿ 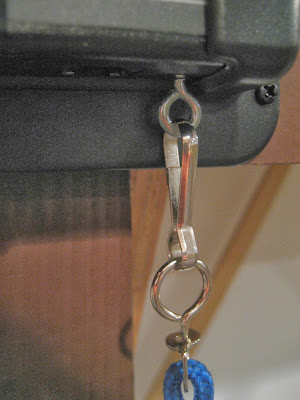 Next, I installed the screw eyes by drilling a #43 hole in the bottom of the casing.  Be sure that the screw won't interfere with anything once it's screwed in.  Then attach the lanyard.  See above.﻿ 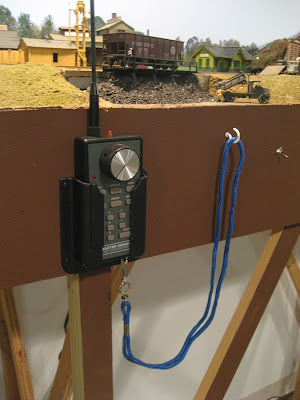 Now that that's done, all I have left to do before Thursday is re-print the switchlists and update the Bulletin Orders.  While we'll be doing the same session as last time, I noticed a couple typos.  Turns out having the wrong car number on a switchlist can be a problem.  Who knew?  Besides, I'm sure my operators will appreciate nice clean swithlists of their own.  The last session also highlighted a couple of close clearances that I'll have to note on an updated bulletin order.

But all in all, I'm in good shape for Thursday.  I know I'm not the first to say it, but I'm discovering how really true it is: having regular operating sessions really does motivate you to work on the layout.  If it wasn't for this coming Thursday, Train Time Tuesday would more likely have been TV Time Tuesday!﻿