Yesterday capped off a pretty busy week of railroad-related events, though I still haven't been able to get down to the basement since my last ops session.  Last Saturday, I spent the day in Troy, NY operating the NEB&W, last Sunday I stepped out of my comfort zone and did a presentation on railroads in Willimantic for the CT Eastern RR Museum, and yesterday I attended the 51st Annual Reunion for the New Haven Railroad Historical & Technical Association, wrapping the day up with a presentation on my favorite line.

The show is always a great chance to catch up with folks you only see here once a year, and it was great that Jim, Mike, Ed, Bill, Joe, Laura & so many others were able to make it.  It's also a great opportunity to check out the vendors and see if there's anything you "can't live without."  The model railroad vendors have been dwindling in number the past few years, but my main targets of interest are usually the photos & books anyway (not surprising for a photo librarian I suppose).  I was able to score both volumes of the New Haven Railroad Facilities books from our very own NHRHTA table, at a pretty deep show discount, but I spent the majority of my time at the Bob's Photos tables.

If you're not aware of "Bob's Photos" and you have any interest in historic railroad pics, you really need to seek him out.  Unfortunately, he's not on the internet but he's at just about every major railroad show east of the Mississippi.  Even though NHRHTA has an extensive collection of its own, I'm always able to find at least one or two shots I never knew existed. 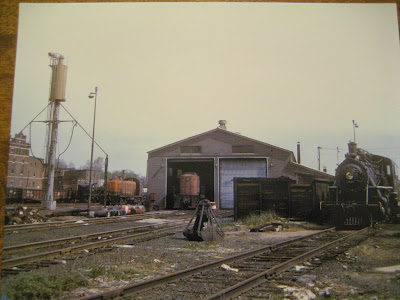 And often you find photos that are "must haves" that aren't even related to your main interest or research.  Case in point - Above is one of the photos I got yesterday, a bit out of character for what I usually go for: it's in color, there are lots of diesels around.  But check out that engine over on the right.  Yup, that's former Birmingham & Southeastern #97 that was used on many fantrips around Connecticut in the late 1960s.  What made this shot a "must" is that I fired & ran 97 in the late 80s/early 90s when it was in active service on the Essex Steam Train (nee Valley Railroad), and it's shown here on the New Haven railroad, in Hartford - where I currently work.  So, yeah, that had to end up in the pile.

What else did I get?  Well, suffice it to say that some of the photos were of Valley Line stations and I got some shots of J-1 mikados in unknown locations.  Many - if not all - of these pics will likely show up in future posts.

The model show was well attended, and actually could have used some more space.  I got some great feedback on the cars I brought, but I think the highlight for me had to be Joe Smith's scratchbuilt model of the station in Danbury.  He's doing for the Berkshire line what I hope to do for the Valley, but one of my regrets of the day is that I didn't get a photo of his work.

Another regret is that the model show conflicted with Bob Belletzkie's presentation on the New Haven & Derby RR.  Bob is an impressive railroad historian and wrote one of the first railroad histories I ever remember reading - about the NH&D.  He's done a lot of additional research on that RR in the last 30 years and I was really looking forward to hearing what he's learned.  Hopefully he'll be willing to give an encore presentation soon.

The only other regret was that - after being such a huge help in putting my presentation together - John Wallace wasn't able to join us.  I was really looking forward to his participation yesterday and the folks really missed out given his absence.  Attendance didn't suffer though - One benefit of choosing the 3pm (and last) presentation slot of the day was having no competition (the train show ends at 3), so a lot of folks showed up to see "A Day on the Valley Local."  A big reason for doing these presentations is getting additional information from the participants, and I learned some new things and got some ideas for additional research - all of which will show up here eventually.  So a huge THANK YOU to all of you that were able to attend and participate!

The day ended nicely with our usual banquet and slideshow and I even won a DVD in the raffle.  So all in all, a great way to end a very busy week.

Now that I have the Reunion and presentations behind me, it's time to get back down to the basement.  The last ops session produced a pretty long "punch list" of to-do items - and the next session is coming up later this week(!)  So I have to get to that.