So how's it all fit?  Well, it ain't perfect or to exact scale, but this should give you a decent overview of how the layout fits into the two rooms in my basement (so far):
Hopefully, it's pretty straightforward - but for a more detailed view of each town's track arrangement, check out these schematics: 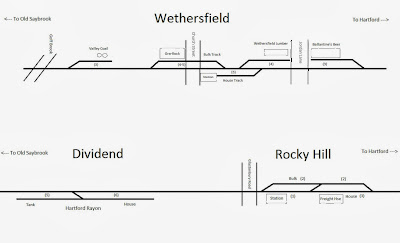 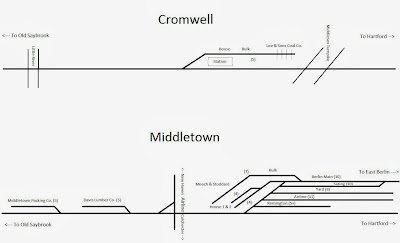 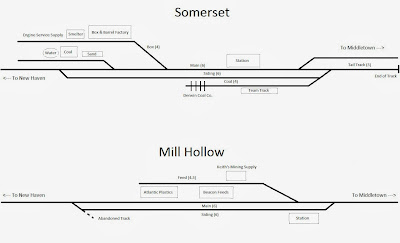 The modeled portion of the Valley Line goes from Wethersfield south to Middletown.  Eventually, the mainline will continue under Middletown and turn into the other (left) room where it will go through the towns of East Haddam, Deep River, Essex, and - eventually - Old Saybrook.  All the track you see (in solid line) is already down and operating; the (very rough) proposed route is shown with a dashed line.  I'm pretty happy that all the Valley Line towns I've modeled so far have track arrangements that are identical to the prototype.  The only exception is Middletown, which had to have its yard selectively compressed to fit the space I had.  But all Middletown's main elements are there, including the quad track & diamond where the Air Line crosses.

Speaking of the "Air Line" (in quotes since it's freelanced so far), it consists of two 2x8' modules that I've connected with a liftout in the corner (in front of the electrical box).  I had the modules already, so they're only stand-ins for the Air Line until I get around to modeling it more prototypically.  The towns and track arrangements are purely fictional.  My primary construction focus now - and for a while will be - the Valley Line.

It may be hard to see, but the operating session starts with the Valley Local "offstage in Hartford."  In reality, it's sitting in Middletown yard, behind the backdrop and out of view of the operator who is in Wethersfield.  He brings the Valley Local "onstage" as it passes through the backdrop and under the Rt. 15 overpass.  From there, it's pretty straightforward down to Middletown.

Eventually, the Valley Local will continue to East Haddam (in the other room) where it will swap cars with the Shoreline Local which will come up from New London through Old Saybrook and up the Valley line for the swap.

The Air Line local starts in one-track hidden staging to the left off the end of the Somerset module and continues to through Somerset & Mill Hollow to Middletown.

So, right now, I only have the Valley & Air Line locals, but will eventually have the Shoreline Local and - if I can work it right (and I think I can) - a few mainline jobs between "New York" and "Boston."  But that's fairly far in the future - I'm having a lot of fun operating the two locals I already have!
Posted by Chris Adams at 7:12 AM