Rocky Hill is the next town south from Wethersfield.  As you 'round the curve heading southbound, this is what you would have seen Back In The Day:

Here's what you see as you 'round the curve on my layout:

Rocky Hill was another place where I'd made the mistake of building my trackwork based on the Sanborn Map.  Like all of these maps, this one dated from the 1920s - when there was still passenger service.  Consequently, I had a nice long passing siding.  But John Wallace recalled a crossover in the middle of the siding that allowed for bulk track service from the southwest part of the siding, and house track service from the northeast part of the siding.  Yes, as you may have guessed, that meant that the "main" actually was always routed through the crossover - northwest to southeast.  So, out came the track, in went two more Micro-Engineering turnouts.  But no regrets - it became evident pretty quickly that operations would work much more prototypically with the more prototypical arrangement (well, duh!)

Next operations area south is a place called "Dividend."  Actually part of Rocky Hill, this area was the location of the largest customer on the line - Hartford Rayon.  Here's the Sanborn map, but as you'll see, it wasn't really all that helpful:

As you can see, if I followed the circa 1924 Sanborn map, my track layout would be all wrong for 1947.  John described the switchback operations at Dividend in his Shoreliner article and confirmed this layout when he saw it in person.  During WW2, there was a bulk oil distributor further north on the tailtrack.  But that business went back to barges after the war.  To the left (south) end, you see the "tank" track curving off to the southeast.  On the prototype, there was another track there and you can (barely?) see that I have a loose turnout placed there to see if I can fit it in.
Next stop south of Dividend/Rocky Hill is the small hamlet of Cromwell.  Here's what it looks like on the Sanborn:

And here's what it looks like on the layout:

There's not much to Cromwell - just a siding/house track and Lee & Sons Coal Co. will be at the end of the siding.  The coolest thing will be if I can replicate Main Street fairly faithfully based on that great photo - especially the diner with the octagon windows! 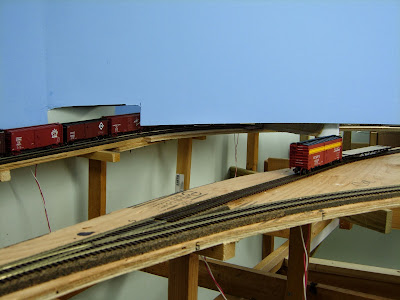 Lastly (for now anyway), here's another shot of Cromwell showing the siding and the track in the background going through the backdrop.  See the "inset" on the trackplan for the track arrangement back there, but suffice it to say that there are two tracks - the closer one is the line from "Hartford" staging (i.e. Middletown) to Wethersfield.  The further line next to the wall goes from Middletown to East Berlin (not yet modeled).  If you saw yesterday's post on Wethersfield, the train you see here is the same one that was heading "northbound under the Rt. 15 overpass."

All in all, I like how the Rocky Hill/Dividend/Cromwell section came out.  I didn't have to make any significant compromises, other than compressing the linear run.  But even on the prototype, these towns are pretty close together.  And, thankfully, the prototype operations are such that you don't end up having too much - or usually any - of the rest of your train in a different town than your loco when you're switching.  With the backdrop dividing the scenes so effectively, you still get a real sense of "going somewhere" when you're operating.  Given my space limitations, that's pretty much the best I could hope for.

So we've made it so far from Wethersfield to Cromwell.  Next stop, Middletown....
Posted by Chris Adams at 9:14 AM