After leaving "Hartford" (staging, actually in Middletown behind the backdrop) and heading south through Wethersfield, Rocky Hill, Dividend & Cromwell, The Valley Local finally reaches Middletown - epicenter of railroading in the Connecticut River Valley.

Two mainlines cross here (well, they're both branchlines, but you get the idea): the Air Line comes up from New Haven and crosses the Valley Line at grade before heading over the Connecticut River to Portland & Colchester.  In earlier days, it went all the way to Boston and - appropriate for the season - was the route of the famous Ghost Train, an all-whitewashed limited passenger train between New York and Boston that ran for only a few years in the 1890s.

A third line came into Middletown from Berlin (see yesterday's "ghost post"), but by 1947 that line had been cut back to East Berlin to serve some brickyards and a paint factory.  However, the "Berlin line" - or at least its right-of-way - was even more useful as the location of the Middletown yard and the interchange between the Air Line local and the Valley local.

With all the local industries, not to mention the interchange, Middletown was still a busy place in the late 1940s and there was still a lot of track spread out over a fairly large area (at least by CT Valley standards).  Consequently, Middletown was where I had to make the most compromises.

As you come into Middletown from the north, you pass the entrance to Middletown yard before you cross over Hartford Avenue (Bridge Street) and the Air Line diamond.  See the Sanborn maps below:

Industries here include Meech & Stoddard feed & grain (at the top center), bulk track (off that track to the right) and the 2-track freight house (just "down" (east) of Meech & Stoddard).  There's even a scale track since carloads of bricks came through here off the Berlin line.  Middletown yard was actually two yards - there was another double-ended yard to the north of the one you see above - but I could only fit in one, so I chose to model the "south" yard - the one with the most diverse stuff going on.

I should have mentioned this earlier, but hopefully it's become apparent by now: all of the Sanborn maps are oriented so the "aisle" (where you'd be standing) is at the bottom.

So here's my treatment of Middletown yard:


This area is, by far, the most compressed area of the whole layout - but I think, given the space I had to work with, it came out pretty well.  All the "representative" tracks are included in some fashion and (maybe not so) surprisingly, it operates much like the prototype.  I say "much like" since most of the switching/classifying of cars was done by the Valley local in the "north" yard, which I couldn't include.  But as long as the Valley local is doing its switching from the "north" end of the yard I do have, it's out of the way when the Air Line local gets in.  All in all, it works very well.

Continuing south of the diamond, you get to the siding for the Davis lumber yard:

Turning 90 degrees left of the previous photo, this is what you see:


If there's a second-most-compressed area, it's the area from the diamond to Davis Lumber.  On the prototype, it's about 1/2-3/4 mile; on my layout, it's about 2 feet.

BUT - and here's the key: <begin sidebar>
Like Middletown yard, despite the compression, it still operates like the prototype.  That's really the point of the compression being selective (i.e. "selective compression," at the risk of being obvious :^).  All the main (i.e. operationally critical) prototype elements are included; the fact that they aren't as far apart as on the prototype doesn't matter operationally.  Aesthetically, yeah, you don't want to crowd things any more than absolutely necessary.  That wouldn't look right.  But if it works operationally, then you should be fine.  The more space you have to space things out is just gravy.

This whole idea of "selective compression" has implications for choosing one's era as well.  I hope to flesh this out in a future post, so just a quick example for now.  Check out the Sanborn map above and note the long passing siding.  That was necessary up to the 1930s to accomodate passenger trains.  By WWII, the siding is gone.  So, I didn't have to include it in my 1947 version of Middletown.  Good thing - that sucker would have eaten up GOBS of space (at least a train length).  But in 1947, you don't miss it.  In fact, it's more prototypical NOT to have it.

Selective compression also has implications for how & what you operate.  I'm operating two local freights.  I have no passenger trains.  True to prototype, I'm using TT/TO, but trains don't have to "meet" or pass each other - not on these branchlines; not in 1947.  So the relative lack of linear run between/within towns doesn't matter operationally.  As long as it doesn't look wrong, it's fine.  And, fortunately, this area of the world is fairly compressed in real life - an added bonus! <end sidebar ;^)>

Finally, after a sweeping eastward curve along the river, we get to the south end of town where you'll find Middletown Packing Co.  Here it is on the Sanborn map:

﻿ The northern-most siding that had been removed by '47 had served a coal dump facility.  The siding in the center there (also removed) had curved sharply to the west (south) to serve the side of the buildings there when they had been Middletown Plating Co.  All that remained by 1947 was the short siding serving Middletown Packing at the lower left.

Here's how this area looks on the layout: 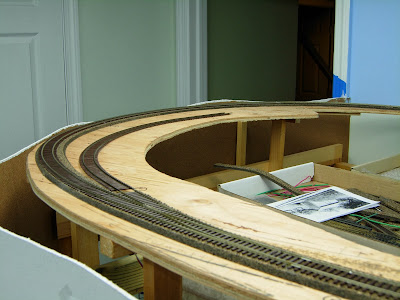 In what's become a theme, especially wrt Middletown, there's a little compression going on here too, and tracks that were there in 1924 (Sanborn map) aren't around in 1947.  So, operationally, this area works fine too.
However, you may be wondering how these facing point sidings (Davis lumber, Middletown Packing) are served, there being no run-around track.  Well, recall that there IS a run-around track, back north in Middletown yard.  The Valley Local would have to put cars on the locomotive's pilot before serving the industries at the south end of town.  Turns out, that's exactly how the real thing operated.  How cool is that?
﻿

Wow - if you've read this far, congratulations/condolences!  Hopefully I won't have many long posts like this - they're tough on writer and reader alike - but as you can see, even a severely-compressed Middletown uses up a lot of space, in the blogpost as well as in the model(!).


As I get to fleshing things out with scenery and buildings, I'll revisit each town in more detail going over what was there - especially industry-wise - and how I'm modeling it.  There'll also be prototype photos where possible.  Unfortunately, despite my access to some of the most comprehensive Valley Line collections extant, there are still industries and areas for which I have no photos at all (e.g. no photos of Davis lumber; no good photos of Meech & Stoddard, still looking for photos of Wethersfield Lumber and Ballantines).  That's where hopefully some of you will come in and rescue me.  If you have - or know where I can get - Valley line related pics, please let me know.  As I continue this project, those priceless pics will be SO VERY MUCH appreciated!
So that's it for the "pure prototype" portion of the model railroad - and that's it for this room.  Next up - the "other" room and the (freelanced) Air Line!
Posted by Chris Adams at 1:02 PM