As you may have noticed from this week's "Wordless Wednesday," I stopped by the Railroad Museum of New England (RMNE) recently to get some additional detail photos of the 1109. I was also curious to get some measurements of the sandbox grabs to see where exactly they're mounted. In my last post on this unit, I mentioned that I'd eyeballed the location of these grabs from a head-on prototype photo. Turns out, the grabs are 7" between the centerline of each leg, and the outer leg is mounted 24" from the edge of the sandbox.

I'm happy - and pretty surprised - to be able to report that I'm within an inch of all the locations/dimensions! But if you ever want to add these grabs to this model, use the actual measurements provided above.

With that inspiration fueling my motivation, I spent another nice Wednesday evening with the AML Chat group making some more progress. 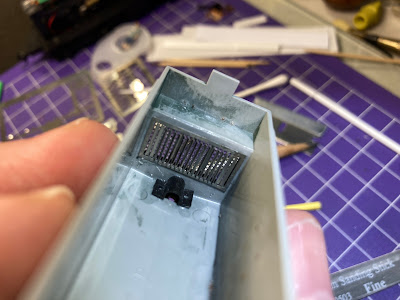 I started by gluing in the louvers from the KV Models "EMD SW1 Basic Detail Set" to the inside of the shell (only later being reminded by Ralph "The Mudfather" Renzetti that I should've waited to glue this in after painting the shell). I'd prepainted the parts themselves a dark gray so they'd show up in contrast to the black body and I also bent the louvers at a 45 degree angle to open things up for a "see through" effect and also let more of the sound out. 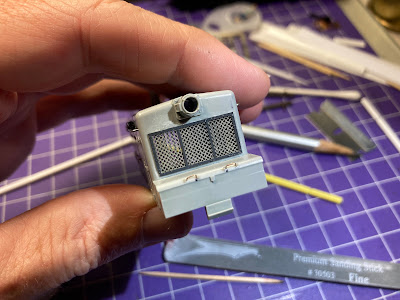 I next glued the frame/screen to the outside of the shell. I'd laminated these two parts together with CA earlier and also prepainted them with a dark gray. Note the sandbox grabs mentioned at the beginning of the post. Here's another view... 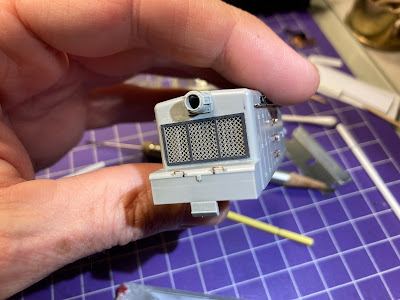 Other than adding the horn and bell, this completes the detailing of the body shell. I next turned my attention to detailing the pilots. 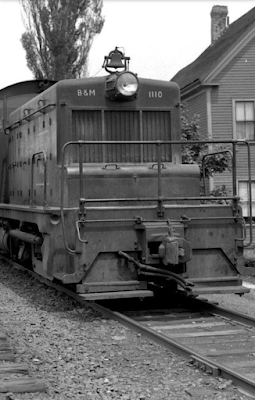 As you can see on this pic of sister unit 1110, all that you need to add to the model are air and signal hoses. Here's a closer view . . . 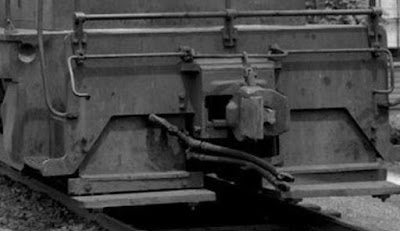 I think the Boston & Maine first used these units for switching passenger cars at Boston's North Station - thus the presence of signal hoses in addition to the normal brake line air hoses (though a B&M expert will hopefully correct me if I'm mistaken). 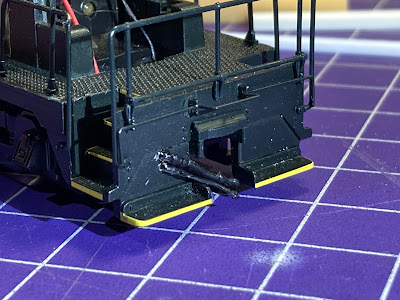 I used a thumbtack/pushpin to create dimples to keep my drill bit from wandering, and located them based on the prototype photo. I used a drill bit in a pinvise to create a deeper dimple, and then used a larger bit in my Dremel (speed regulated with a foot pedal) to drill out the holes. The pilot/frame of the Walthers model is metal, but it's a soft metal so it isn't too difficult to drill. 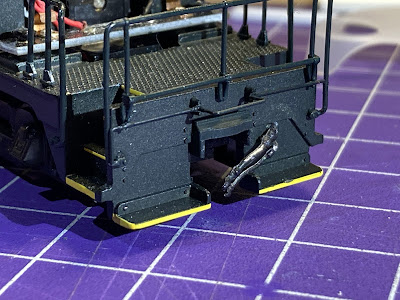 One thing to keep in mind on these units is to make sure the hoses on the rear of the unit are located on the engineer's side. This is opposite what you think would be the "normal" position for air hoses, but it ensures that the engineer can see the brakeman operating the hoses.
With that, I think this engine is finally ready for primer and paint(!) I'm going to set it aside for a bit and then give it One Final Review to make sure I haven't forgotten anything, details, etc. Assuming I haven't, it looks like the B&M 1109 will be ready for service very soon!