General Layout Update - An SW1, A Coal Trestle, and Some Scenery

As I mentioned in my last post, I was a little surprised to realize I haven't done a substantive post on the layout/projects since the end of August. And if you don't follow the Valley Local Group on Facebook (and, let's be honest, why would you want to get on FB during an election season anyway), you may not realize that I've actually made some decent progress these past couple of months.

So by way of catching you up - and by way of my documenting that progress - here's what I've been up to:

If I'm a devoted New Haven prototype modeler, why am I doing a Boston & Maine SW1? If you don't know - and are curious - click here for the story.

The last time I posted about the 1109, I'd just finished disassembling and stripping it. Since then, I chiseled off all the door handles & lift rings, and added some additional detail - including my first-ever foray into stainless steel details. 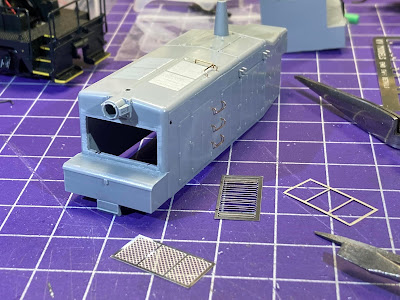 The Walthers model I'm using didn't have any molded-on grabs, thankfully. Unlike the P1k RS-2, they don't supply any NBW detail, but they do provide some dimples to help locate the holes. In the photo above, I've added the hood grabs and removed the radiator screen from the body shell. The plan is to replace it with the KV Models stainless steel parts you see here. I also removed the bell casting and filled in the hole. 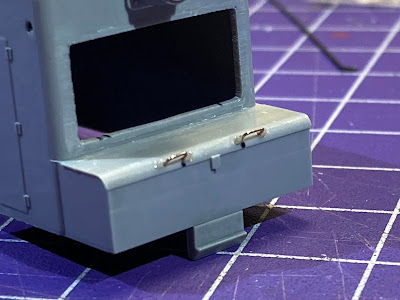 Strangely, not only does the model not include grabs on the sandbox, but there are no locator dimples either. I used a dead-on head shot of the prototype, as well as some engine diagrams, to help me locate and size the grabs. Here they are installed, along with NBW detail added. Here's a view of the rear of the cab with grabs added - also a nice view of the door handles I'm using. 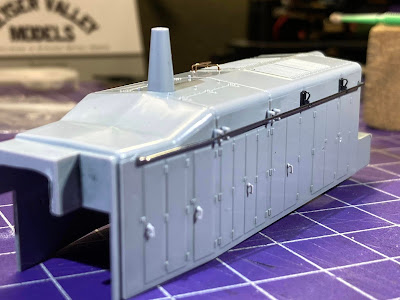 This is where things stand at the moment... All of the door handles were replaced (I'll install the front two after decaling), the lift rings were replaced with finer detailed parts, and I reinstalled the stock handrail. 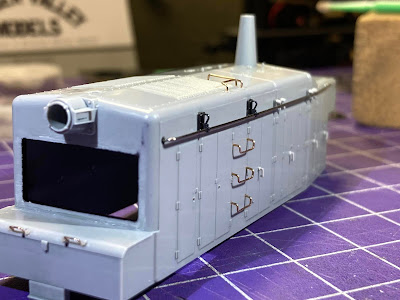 Next step will likely be to install the radiator screen (which has three separate parts to laminate(!)) and then primer. Oh! And I have to add pilot detail as well (coupler lift bars, air & signal hoses). Also want to see what ChrisZ has cooked up for a suitable replacement horn (there's no Leslie A-125 in HO scale that I know of).

Sometimes the best thing for keeping up your layout motivation is to work on what you're actually in the mood to work on. I'd been getting pretty intense at the bench with the SW1, so as I was driving home from work one day, I decided to make a quick stop in Essex for some inspiration. I got it in the form of the old coal dump at Dickinson's. . . 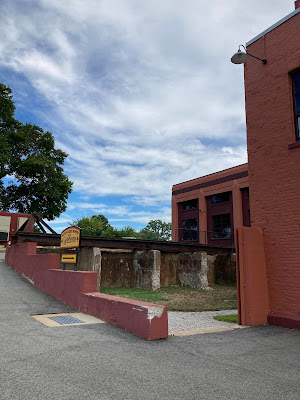 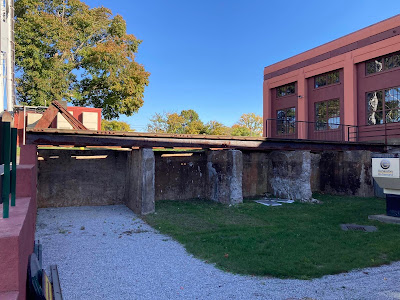 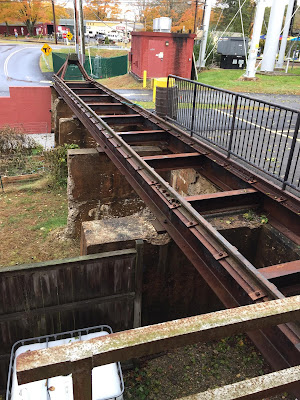 On my layout, this portion of the Dickinson complex (which includes the distillery, thus the need for coal to fire the boilers) is literally right at the aisle. . . 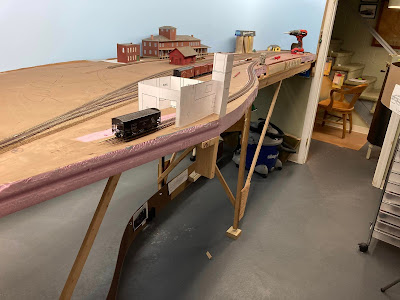 Above is a mockup of the area, with the fascia removed in anticipation of . . . 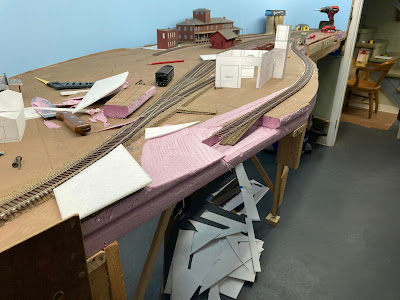 . . . creating the pit and terraforming the area. 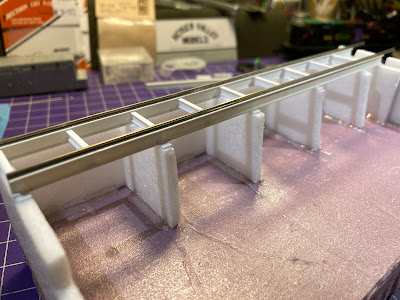 I decided early on that the pit itself, as well as the piers and track, would be best built at the bench (move over 1109!). The pic above shows the start, with the track dry-fit in place: foam base, foamcore walls/piers, and Code 55 rail CA'd to a support structure of I-beams, resting on steel plates. 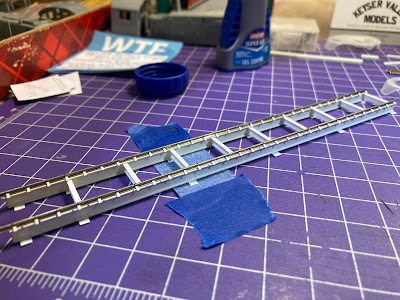 As you may have noticed from the prototype pics, the real rails are attached to the I-beams with small plates of steel, bolted in place. The pic above shows 1/2 of the 120 of them that I needed(!) 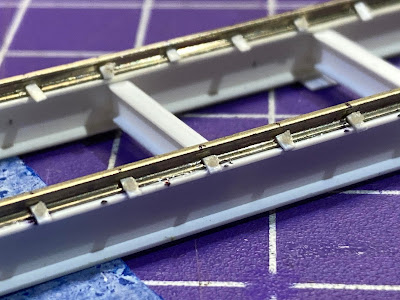 And the pic above shows the start of my adding NBW castings, per the prototype. Yes, these first had to be cut off the mounting pins - no way was I going to drill 120 holes to mount them in. They're just glued in place. Unfortunately, I'd already added them on the inside of the rail before realizing that they wouldn't clear wheel flanges on such small rail.
So that's where the coal dump project stands. Next step is to remove the remainder of NBWs from inside the rail that didn't already get knocked off(!). I'll likely replace them with drops of CA to at least represent "something" there (rivet/NBW - the viewer will decide :^) Then I think it'll be time for painting, final assembly, and placing on the layout!

Yes, with a little help from my friends, I've even had the temerity to dive into a bit of scenery over the past bunch of weeks. 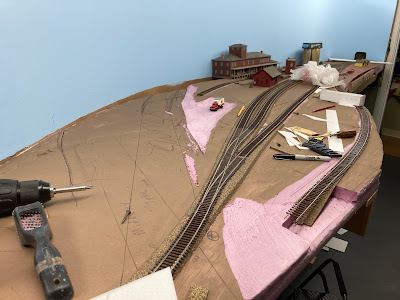 Believe it or not, the photo above is of "scenery." Well, the foamboard version of it anyway. Long-time readers may remember that I'm not much of a fan of foam base for scenery, preferring the naturally-occurring contours that result from traditional cardboard lattice & plaster cloth. But Essex is fairly flat, so it made sense to use foamboard here - but I needed help figuring out how to add the undulations. Thankfully, Bill (who, IIRC, uses foam board exclusively) agreed to come over and help me create the mess that is foamboard terraforming.

What you see above was "all" that was needed - lower the board where the road will go and rasp down the contours to match. 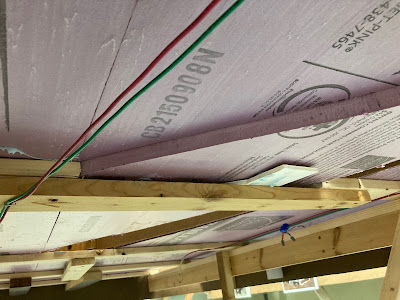 I'm still not sold on foamboard construction, especially when stuff like the above is necessary. Yup - that's one of the joists (actually, they're more like slats under a bedspring) that had to be cut in order to allow the board to be lowered enough. Everything went back together fine with wood glue, screws, and some PL300, but I'm glad this was the only area needing such surgery. 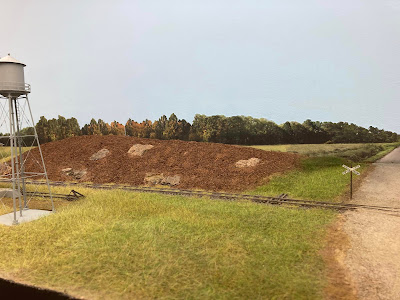 Needing a break from foam dust, and having a rare opportunity to have Jim Dufour visit to provide some training wheels while I get my scenery balance, I decided to tackle this area between Rocky Hill & Dividend. As you can see above, I only had basic ground cover done here - static grass, chopped up leaves, and rock castings added over my usual ground goop, plaster cloth, and cardboard lattice.
With Jim helping me think through how I wanted things to look here - and then providing advice on what materials to try to get the effects I was after - we were able to transform the above scene to this: 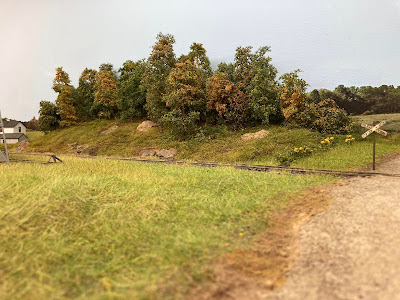 We focused only on the space between the tracks and the backdrop, adding the following in order:
I don't mind saying I'm pretty happy with how it turned out. It really looks to me like all the trackside hillsides I see around here. 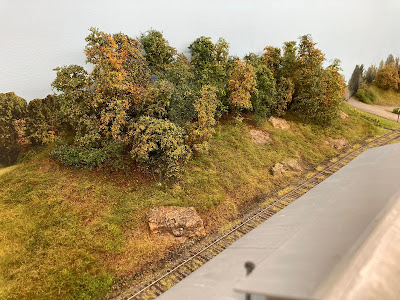 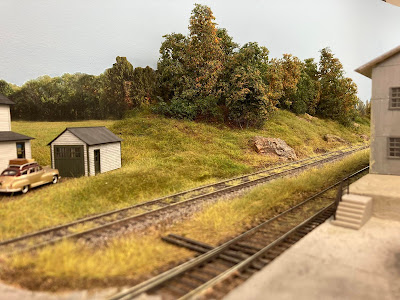 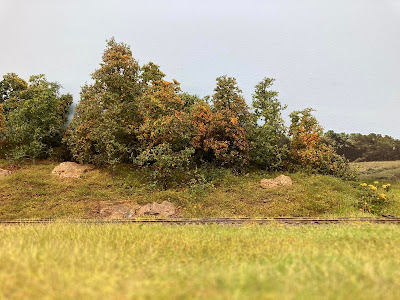 One of the coolest things about it though is that it stands up really well even under close scrutiny . . . 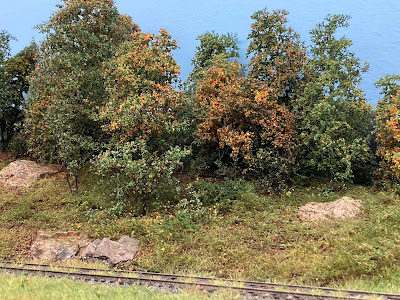 Now, if I can just remember how I achieved this effect, I can replicate it at the south end of Dividend - along the hillside & cut that provides the scenic divide between Dividend and Cromwell.

And that, my friends, is a great reminder of why I'm going to double-down on maintaining this blog. How else am I going to be able to archive what's worked - and what hasn't - and be able to refer back to it and jog my memory? Hopefully you'll weigh in if you see me headed for disaster - or have some advice/guidance on how to do something better, or even a new technique to try.

In the meantime, I hope you've enjoyed this update as much as I've had fun putting it together. It's neat to see that, despite how I sometimes feel about the pace, I *am* making progress. Thanks for following along!