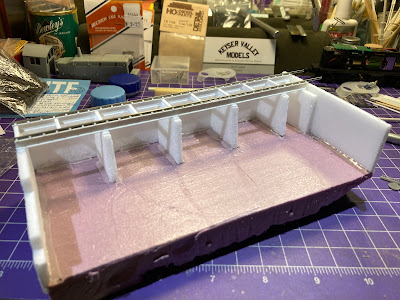 In my last post, I mentioned that the next major step on the coal dump would be painting. Well, that may not be the case...
I did finally finish installing the rail clips and NBW castings and added compromise bars (Code 55 to Code 70) at the end that'll connect to the rest of the siding . . . 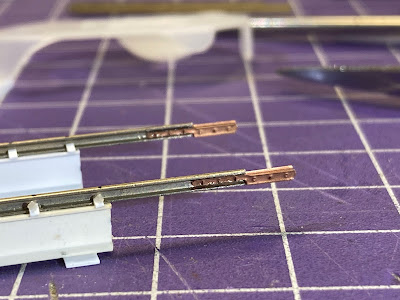 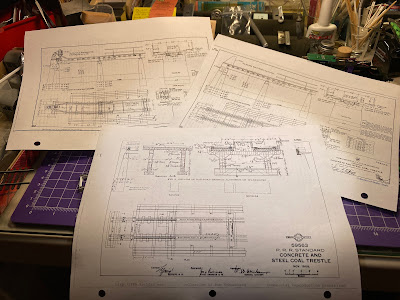 But now I'm reviewing various plans on how to construct a walkway along the side of the track. I'm not certain the prototype had one and the east/far side of the track was at grade, so it may not have needed one. 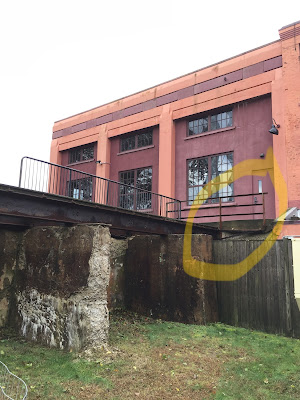 There certainly isn't one now, but this photo has me suspecting there may have been a walkway at one time. I've highlighted what might be the last remaining support if one existed. Click on the image to enlarge.
I may try to get over to see it in person to investigate further. If it looks like there had been other such supports (with remaining tell-tale evidence of having been cut/torched off, for example), then I'll add a walkway. But otherwise, and unless I get other evidence there was one, I won't bother adding it. This whole thing is going to be right at the edge of the layout adjacent to a narrow aisle and as cool as the extra detail of a walkway and railing would be, it'd also be very susceptible to the occasional stray elbow.
Whether or not a walkway existed, such research and investigation is a big part of the fun of the hobby for me and other prototype modelers. We just have to make sure it doesn't end up totally swallowing all of our modeling time!
Posted by Chris Adams at 6:47 PM

Email ThisBlogThis!Share to TwitterShare to FacebookShare to Pinterest
Labels: Dickinson