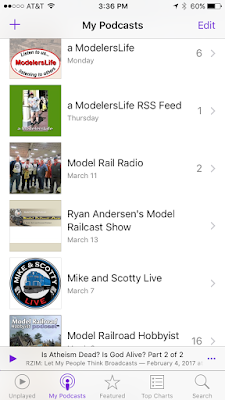 Model Railroad Podcasts make a great companion for modeling and are often even better for getting through a commute. I've been an avid listener to a bunch of them for a long time (click here for a list of my favorites), but every once in a great while, it's very cool to get on the other side of the speaker and participate. I usually post about those times (click here for links to those episodes), but with everything that's happened over the past year, I realize I missed a few.

So, if for no other reason than to have a quick reference for myself, here are links to the other shows & episodes where The Valley Local has featured - if not prominently, at least tangentially :^)
As some of you may know, Model Rail Radio is a live call-in show and anybody is welcome to participate. Hosted by Tom Barbalet, this podcast is one of the grand-daddys - going waaay back to 2009, which probably makes it one of the first podcasts of any type. After listening in for about 3 years, my first call-in was back in the summer of 2014 - and then I didn't call in again for almost another 3 years(!). I've gone to the other extreme a bit lately, but will dial back a bit until I have a worthwhile update.

A Modeler's Life (aka the AML) is a bit more controlled, despite its freewheeling feeling. While arguably a "spin-off" from Model Rail Radio (the spin-offER and the spin-offEE are sometimes disputed), it's an altogether different animal. You can't just call in, but if you get to participate it's always a lot of fun. Lionel Strang is a great host and asks good questions (and is sometimes a good host that asks great questions). While MRR is explicitly a "podcast about the hobby of model railroading," the AML is as much - and sometimes more - about the people that happen to do model railroading rather than about the hobby itself. But, as you'd expect, model railroading figures prominently most of the time.

If you haven't tried listening to model railroad podcasts, be sure to give them a try. Whether you're at your workbench, working on the layout, doing chores around the house, or on a long drive, it's like having some hobby buddies right there with you. With apologies to the AML's Patreon page, it's about as close to a "virtual hobby shop" as you can imagine.