One of the things I enjoy most about living in New England is that so much of the past is still around. There are so many places you can visit - from an old seaport village, to the last operating steam-powered cider mill in the US, to even a steam locomotive powered railroad - where it takes very little imagination to convince yourself that you've fallen through a portal and traveled back in time. And all that is just within 20 minutes of my house(!). Christmastime is especially magical, of course, with all the many memories from the past that come flooding back into our minds - whether we actually experienced them first-hand or not. 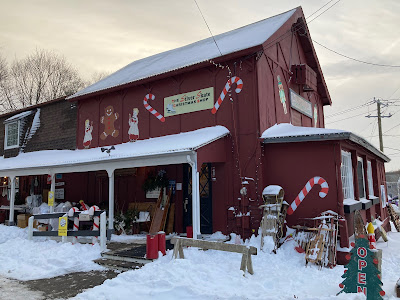 One example of that is a little shop that pops up in Niantic, CT every Christmas. The coolest thing about this particular shop is that everything is vintage. You really feel like you've stepped back in time to a Christmas store sometime in the 1930s-50s. 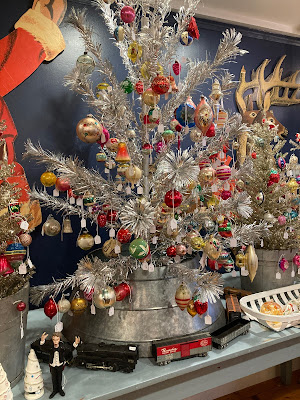 There are SO many cool things to see and, of course, buy. But as I was browsing this particular time, I noticed the big band music playing in the background, setting the perfect mood. The coolest thing about it though was that it seemed to actually be coming from some of the old radios that were on the shelves.
There were 1950s vintage Bakelite radios, as well as older wood-veneered radios, all playing the music they would have been playing Way Back When.
Talk about a Twilight Zone moment . . . I thought at first that the shop owners had found an oldies (really old oldies) radio station - until I heard the vintage commercials. Then I was REALLY floored.
As I stepped closer, I realized these little treasures were for sale - and I discovered the secret. They'd been converted to super-cool Bluetooth speakers(!) So you could use them to broadcast anything you want!
I found one in particular that looked cool and The Missus (wise woman that she is) reminded me that, although Christmas shopping was done, I still had a birthday coming up. Suffice it to say, one of those treasures came home with me that day . . . 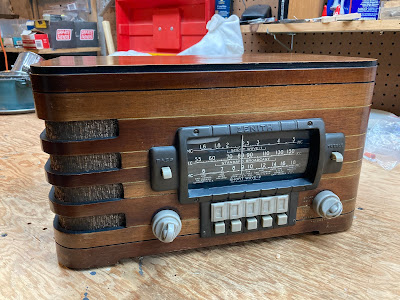 So what we have here is a 1940 Zenith model 6S439 radio. It's a small tabletop 6-tube AC circuit radio, which originally received signals over the standard broadcast band and two short wave bands. It also has "automatic" or push-button tuning, and the Zenith RadiOrgan tone control (but has only two controls rather than the usual 5 or 6). 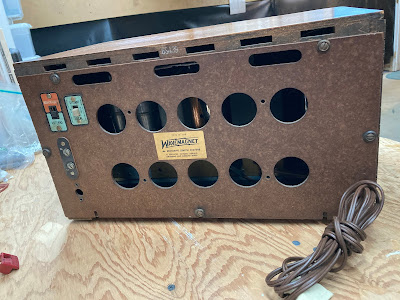 While many of the innards are still intact, it would be very difficult to restore to original operating condition. Turns out, there's a local kid (to me, anyway - he's under 30 and gives me hope for the younger generation :^) who finds old radios and tries to restore them to operating condition if possible (and to his credit), but if he can't he installs Bluetooth so that they can still be enjoyed. 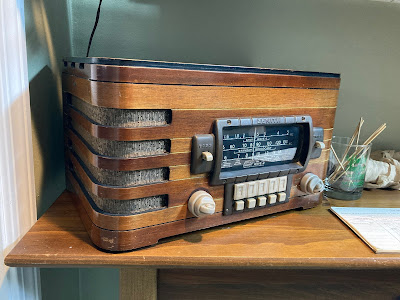 And that's what he did to this old Zenith. It makes the PERFECT compliment to my 1940s-era layout and fits in nicely on the operator's sign-in table. Just look at that beautiful two-toned wood! 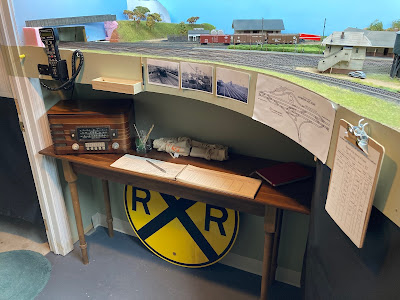 Certainly fits in nicely, literally and figuratively. And - best of all - not only does it look like it belongs in and amongst a 1940s railroad. . . it sounds like it too! Just give it a listen . . .
We enjoy such a multi-faceted hobby that touches on SO many different aspects of life, from carpentry to electrical, to the artistry of scenery building, the challenge of realistic operations, and even - in this case - the collecting of antiques that help create just the right setting and ambiance for your guests.
No wonder it's called the World's Greatest Hobby!
Have you acquired some non-railroad item that you're using to compliment your layout, train room, or crew lounge? If so, I hope you'll share it with us all in the comments below!
Happy Friday and here's hoping you have a wonderful weekend and some hobby time!