Last time, I'd just finished the "terraforming" at Dividend - mostly cardboard lattice overlaid with plaster cloth, with foam board profile boards. My next step would typically be to cover the plaster cloth with "ground goop" and, while it was still wet, either sprinkle ground foam on top of it or go directly to applying static grass. But ground goop, being basically a mix of Sculptamold or Celluclay, glue, and paint (click here for details), can be pretty messy. That's usually not a problem - but since I have a cut here, I need to use some rock castings and the goop might mess them up. 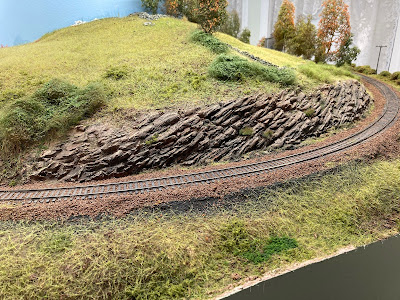 Now, if I was as talented as my friend Bill (see his work above - between Goff Brook and Rocky Hill), I could have just carved the rock faces right into the ground goop and called it a day. But, not being as talented, I figured I'd take a more controlled and traditional approach.

So, instead of ground goop, I decided to use rock castings, pressed into plain white Sculptamold, and color and paint everything later. 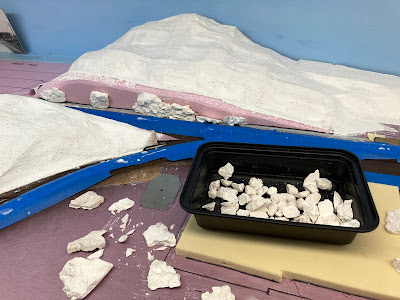 First step was to grab some rock castings and start playing around with positioning them. Confession: these were all castings I inherited and didn't even cast myself. 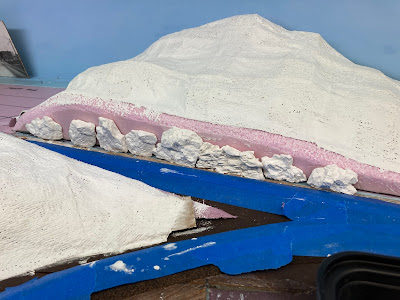 The method is to place the castings until they look "right" then "glue" them in with Sculptamold. But, as you can see in the pics above - even with rasping down the foam - things still look really off and not at all like I imagine an actual rock cut would look. 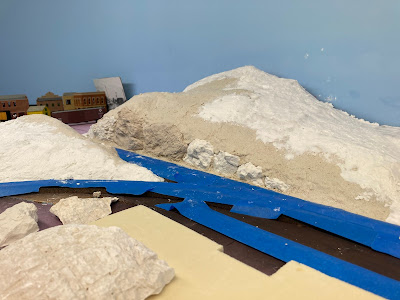 But I kept experimenting with different castings and discovered that the larger ones looked better. But I did have to "backfill" behind the taller ones with more Sculptamold. You can start to see the results of that filling-in above. Just like icing a cake - but with a fairly thick layer of "icing." BONUS: The varying heights of the castings created a much more natural, irregular look to the top of the cut. It no longer looks quite so even and "perfect." 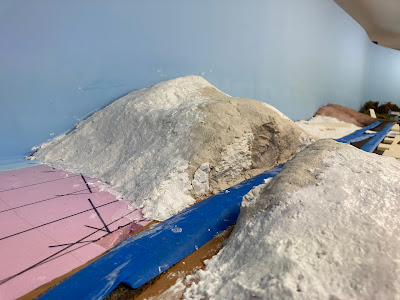 As I mentioned earlier, I attached the castings by adding some Sculptamold to the foamboard (it would actually have been easier to trowel it onto the back of the castings themselves), and then pressed them into the Sculptamold, allowing it to ooze out a little bit between the castings. Carving that "ooze" later visually ties it all together - especially after you color everything "rock color." 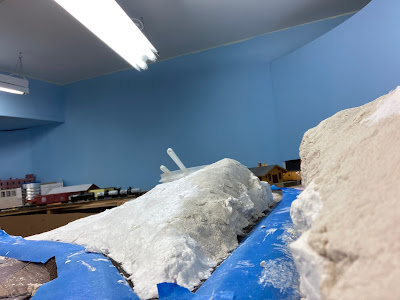 I actually practiced this technique on the side of the cut facing away from the aisle. Figuring folks wouldn't normally see it, it seemed a good place to make whatever mistakes I was going to make. Fortunately, this process is just about fool proof (insert joke here - as even I can do it...) 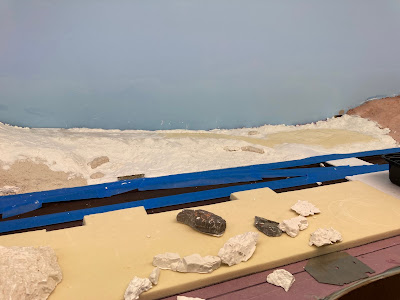 Seeing how nice the cut was turning out, I decided to add some more random rock outcroppings, just like I'm used to seeing around here. I am modeling New England, after all. 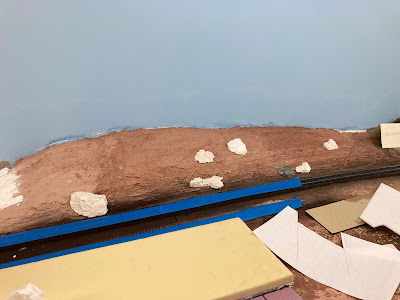 There's really no science to this (and if there actually is, let me know in the comments). Based on my hikes, rock outcroppings are pretty random and all over the place. So I just placed some rock castings randomly around the scene. 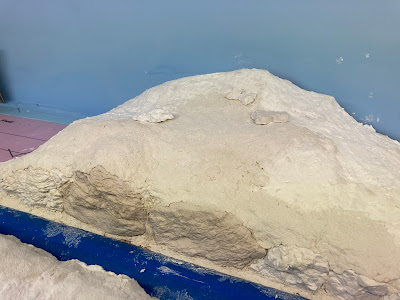 I did, however, try to place them where they looked "right" and fit best. 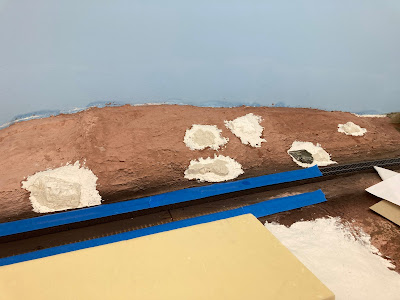 But of course it's no surprise that they never fit perfectly - and have to be affixed to the scenic form anyway. So, I mixed another small batch of Sculptamold and used that as glue/mortar to place the rock outcroppings "into" the terrain. 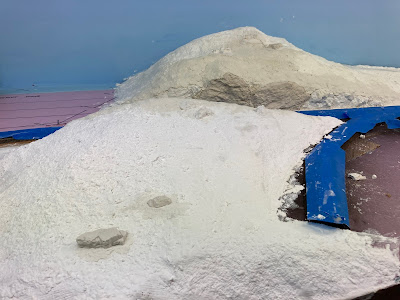 This is the first time I've ever dealt with rock castings to any great extent. Although I did use a few of them near the Mattabesset River in East Berlin, they were already colored and ready to use. It was just a matter of pressing them into my ground goop.
But there was no way I was going to try and color the rock faces in the cut ahead of time, before placing them. I figured (rightly, as it turns out) that it'd be much easier to blend the rock faces together if I colored everything at the same time - castings and "ooze" in between. So that being the case, at least so far, doing the rock "sprinkles" in amongst plain white Sculptamold "icing" is a much less stressful, reversible, and cleaner technique.
Next step will be to color the rocks - in place, right there on the layout - and then use earth color paint (the paint I would normally mix with the Sculptamold to make the ground goop) to paint all the white and right up to the rocks. Add ground foam onto the wet paint, then static grass, then . . .
Well, I don't want to get too far ahead of myself. Before starting all that, I want to make doubly sure that I don't need to place any more rocks. And I also need to make sure that the terrain contours are exactly where I want them.
Oh - and before adding ground foam and static grass, I really should do the photo backdrop so I can have at least a chance of matching the colors. And that means PhotoShop, which means I'm staring down another big challenge. Methinks I wait too long between PhotoShop sessions - I always seem to have to relearn it Every Single Time I use it.
But there are a few other things I can procrastinate with need to do before I get to that. I hope you continue to enjoy following along - and even better if you actually learn something new or are inspired to get to work on your own layout. If so, I hope you'll let us know in the comments.
Till next time!