It's a bit ironic that the more progress you make on the layout the less time you have to post about it. That's where I'm at lately - lots of blog fodder but little in the way of blog posts. Folks following the Valley Local group on Facebook have gotten a small taste of what's been up on the layout these past couple of months, so it's high time to start catching up here . . .

As I mentioned a couple weeks ago, much of October was taken up filling in the Airline and extending the Saybrook scene. Well, somewhere during the middle of the month, BillS came over and we finally got around to adding some water to the Goff Brook scene. You know - so that there'd actually be a brook at Goff Brook. I even alluded to it in a Wordless Wednesday . . .

Goff Brook had been experiencing a severe "drought" for over 2 years and I've also been wanting to finish the Mattabesset River over in the East Berlin area I've been scenicking, so I decided to try out a new (to me) product: Woodland Scenics Deep Pour Water.

Most folks - including me - have heard of using EnviroTex for water. It's certainly a lot less expensive than the WS product, but I'd heard enough horror stories about the smell and it's tendency to creep up the banks that I figured the WS price was worth paying for the relatively small pours I'd need.

The WS product comes with a pretty detailed instruction manual, but it's basically a two-part resin that you have to mix. The exact amount can be calculated by using the handy WS calculator app (which I downloaded to my phone). I could only tell a few real differences between this product and what I've heard about EnviroTex (and affirmed by BillS, who was with me for this first try - and has used EnviroTex): It's heat activated so you should warm it up a bit before using it, per the instructions (um, we didn't do that and it turned out ok - but I will definitely do it in the future); it has no smell that I could detect; and it didn't tend to creep up the banks.

The version I got was the "Murky Water" - which is essentially their clear water product with the color already mixed in. I also purchased a package of the clear water & a separate bottle of the coloring agent to try that at another time.

I don't know if it was beginner's luck, or if I've over-psyched myself out about doing scenery, but I think it came out pretty nice: 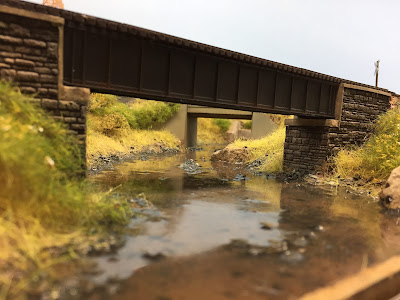 We poured it to a thickness of probably about 3/16" (the instructions recommends only 1/8" at a time), but hopefully you can see how translucent it is, despite it's overall "murky" tone.

It's also just a tad cloudy when you bounce the light off of it. I read elsewhere that that's one of the side effects of not warming up the product first. But it turns out, it was perfect for what I wanted - a murky (not mucky) stream with some, um, oil slick runoff from Valley Coal (yeah, that's the ticket). 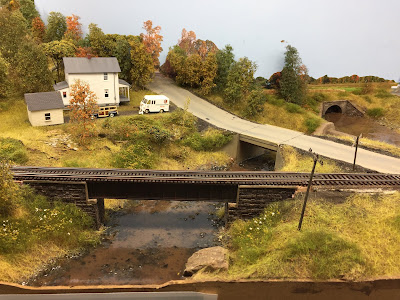 I still may try my hand at adding some ripples using gloss Modge Podge - especially around the rocks. But for now, I'll call this scene, if not actually done, at least at an acceptable level of "doneness" that I can make some progress in other areas.

Let me know what you think in the comments!
Posted by Chris Adams at 6:21 PM