After my Friday Fail, I received a lot of great feedback on how to salvage things. Some of the best suggestions - including using this "fail" as an opportunity to develop a new method of weathering (call it "zip taping" or somesuch...) - I finally decided that most of those ideas would tend to bog me down. I really appreciate folks weighing in, but in the end I just decided to reshoot it and keep moving forward. 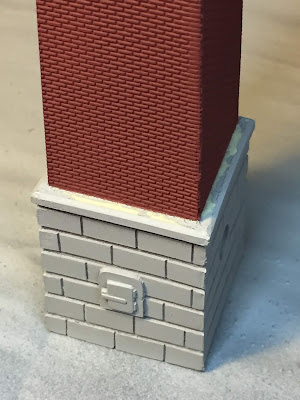 Unfortunately, as you can see, even the Tamiya tape peeled up some of the underlying paint. Based on the feedback I got, this is due to one - or all - of the following:

No worries though. Even stupidity such as this can be corrected... 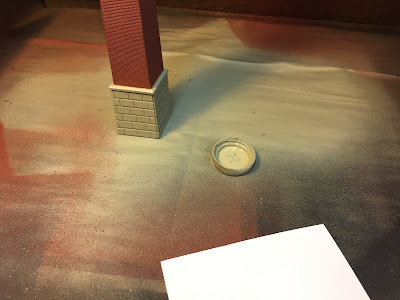 I decanted a little bit of the spray paint into a bottle cap . . . 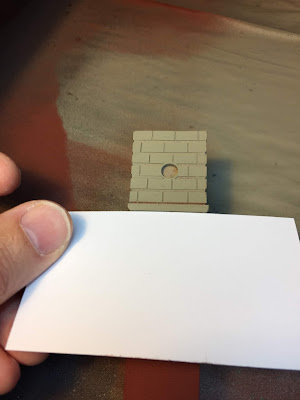 and then used a business card (no adhesive!) as a mask to allow me to touch up the paint with a small brush. 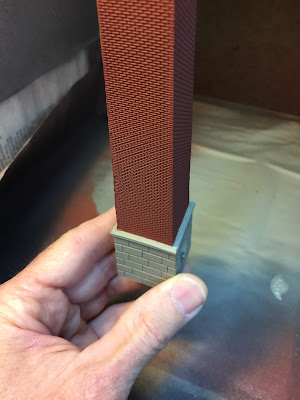 Should have taken this pic closer (click to enlarge), but hopefully you can tell that it's all nice and uniform now. No chips! 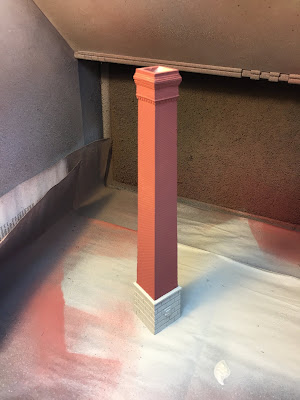 And here's the painted - though not yet finished - chimney. I still need to paint the cap the same color as the base, not to mention spraying some black inside (which I probably should have done first).

After adding mortar lines to the brick (likely subject of my next post, since I'm in the process of experimenting with different techniques), I may opt to Dullcote it to seal it well before doing any weathering.

Be sure to let me know if any upcoming pitfalls occur to you!
Posted by Chris Adams at 12:01 AM