Friday Fun? - Another Lesson Learned & Using a Postcard as a Backdrop

After leveling up the Fernwood Street area with some masonite, I figured I'd be able to dive right into doing the street and sidewalks once all the goop dried. Unfortunately, instead I ended up with this: 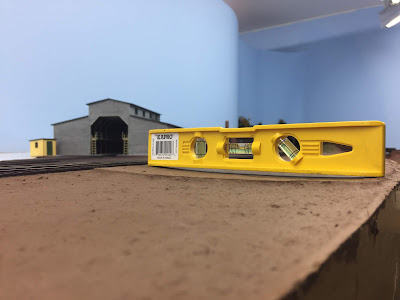 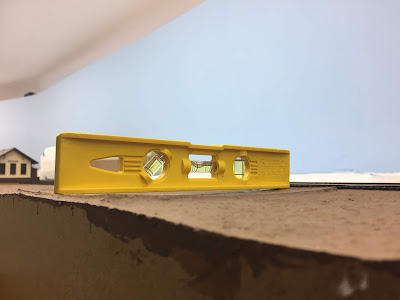 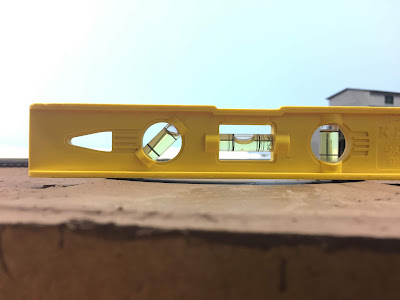 Yup - my nice flat street base is all bowed in both directions(!) I thought the thick, finished masonite would have held its shape. But, apparently, the high water content of the goop soaked into the masonite, warping it substantially.

LESSON:
Either seal the masonite first by painting it, or don't use masonite at all and use styrene instead.

The problem I have now is that the terrain and road base is just about even with the track level - I don't have much more room to add another layer (e.g. styrene) on top of things to level everything out.

So, I decided to put that to the back of my brain and mull it later. One of the nice things about having such a large layout is that there's always something else you can work on. In my case, I decided to go back to the Route 15 overpass.

When we last left this area, I'd just finished the overpass and was trying to figure out how to proceed in the scene - what to do about the backdrop, terrain, etc. 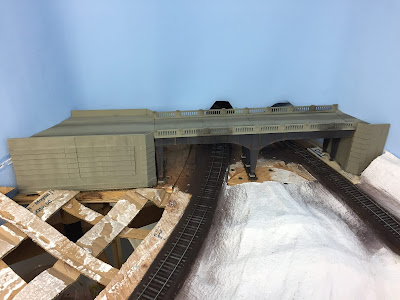 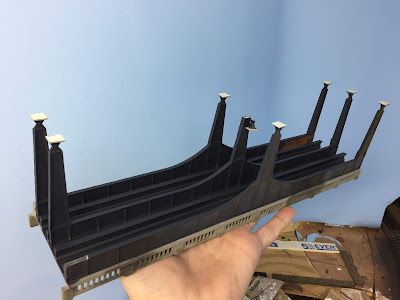 It literally seemed that every time I moved the overpass something else on it would break! Thankfully, the repairs were always easy to make, but I finally decided that I have to put the overpass in place once and for all just to protect it.

And that meant that I'd have to do the backdrop and the surrounding scenery. 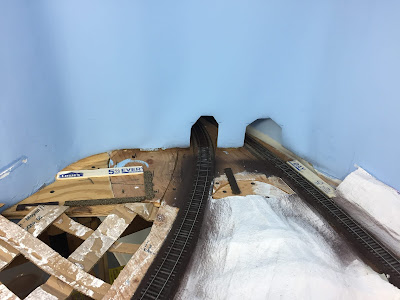 First step was to raise the height of the abutments and piers. I knew I'd be using ground goop in the area and the "concrete" footings below the piers weren't tall/thick enough to not get buried. So I added a course of N-scale roadbed strips under where the piers would go and added some scrap wood of similar thickness (in this case, pieces of paint stirrer stick) underneath the abutments. 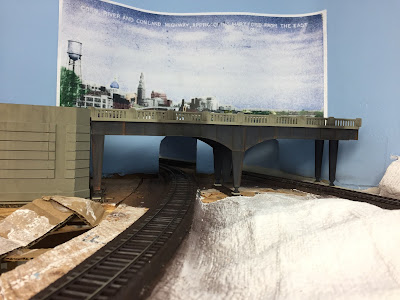 Once in place, I fussed around with the backdrop quite a bit to determine final height and placement. How to actually do the backdrop has been the single largest roadblock to completing this scene. Since the Valley Line heads north from Wethersfield into Hartford, I wanted to include the Hartford skyline as it looked during the era I'm modeling. Unfortunately, one of the problems with prototype modeling is knowing a bit too much about your prototype - only the "right" image would do. And, unfortunately, there aren't many such images.

In fact, this postcard is the only one I found which was suitable. So I enlarged the postcard, and a friend of a friend colorized it for me. It's not ideal and it sufficed as a stand-in for the past few years. But ultimately, I decided not to let the perfect be the enemy of the good and decided to use a postcard for my backdrop(!) 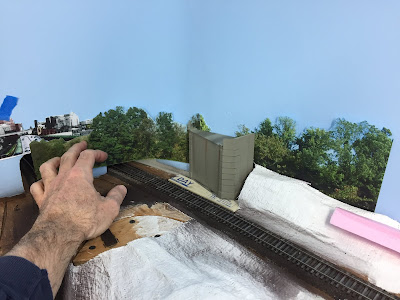 I used an x-acto to cut around the skyline and used some tree photos I'd taken to start trying to blend things together. 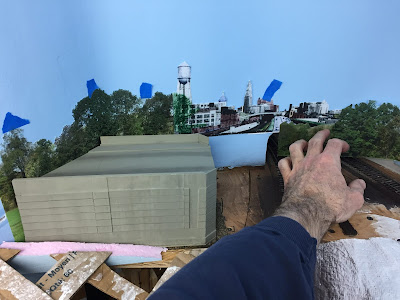 In a sheer bit of dumb luck, it turned out that the postcard image had a bit of tree in front of the water tank on the left. That provided a particularly nice transition between the one-dimensional backdrop and the 3-D scenery in front. Here I'm using tape to place things temporarily while I determine final positions.

Notice I also added a small foamboard ground contour in front of the left abutment & hot glued the cardboard strips to it. This way I'll be able to easily lift out the abutments to access the track - and to easily salvage them should I ever dismantle this layout (whether the overpass itself will survive another move remains to be seen). 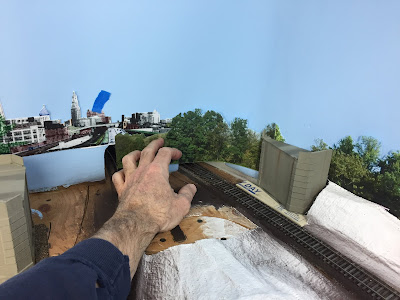 More fussing with position and placement of the other parts of the backdrop (i.e. treeline). 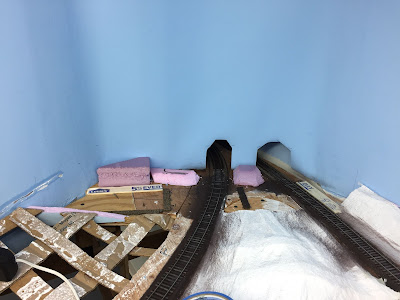 Once I marked where all the backdrop pieces would go, I installed some foam blocks to provide bases for the trees I'd use between the backdrop and the bridge. 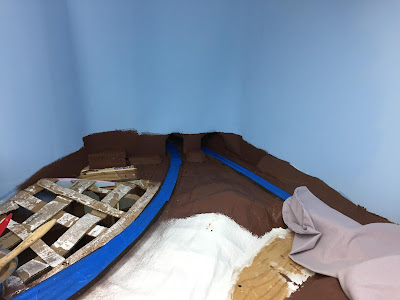 Next, I covered the track with some tape and an old pillowcase and painted the area my ground color (which, incidentally, I think is way too dark). I took the ground color right up the bottom part of the backdrop base (blue-painted vinyl) to prevent any blue from showing below any backdrop photos. 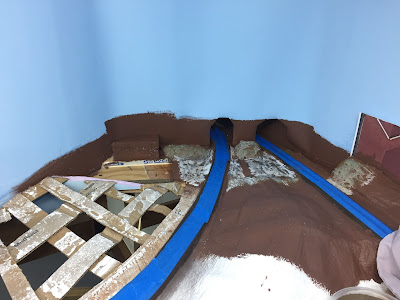 I then added dirt and ground foam in the area behind and underneath the overpass - dirt directly below, and ground foam everywhere else. Once in place, I sprayed the materials with 70% isopropyl alcohol and dripped on diluted white glue. 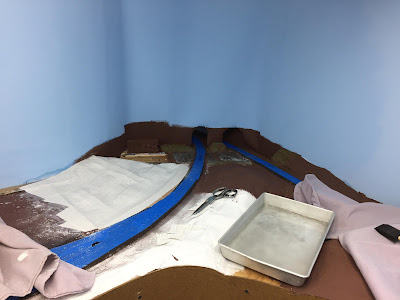 Finally, I (re)applied plastercloth over the cardboard strips to fill in the area just south of the west abutment.

Next time, I'll show how I disguised the bottom edge of the backdrop & "tunnel entrances" & will start on trees and basic scenery. Oh yeah - and I'll share yet another lesson learned....