So, this happened a while ago, but with everything going on I'm just now posting about it. . .


Yes, I finally finished the Rt 15 Overpass which will anchor the "north" (right) end of the Wethersfield scene on my layout. After doing some more weathering, including adding soot to the portion of the bridge that's over the tracks, I put everything in place - and discovered a problem.

The "oil" marks that I'd made down the center of the lanes on the abutments and bridge didn't match up! That's what I get for doing each piece separately (left abutment, bridge, right abutment). Actually, the left abutment and bridge matched ok, but the right abutment was WAY off. No problem. Since I used powders, and hadn't set anything with a fixative (and, since this will never be handled, I may not bother with a fixative), I just used a cloth dipped in alcohol to gently wipe off the marks from the right abutment and redid them - this time with the bridge and abutment right next to each other.  Probably didn't matter too much anyway - you never even see the roadway from normal viewing angles.

So, here are some pics of the finished project! 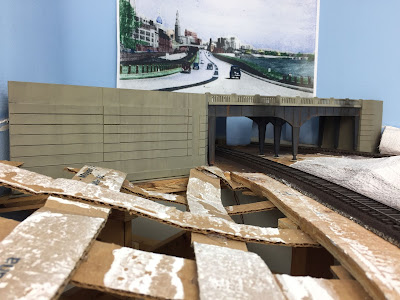 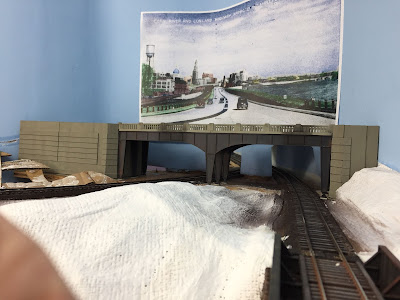 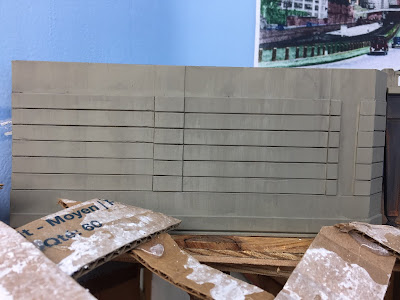 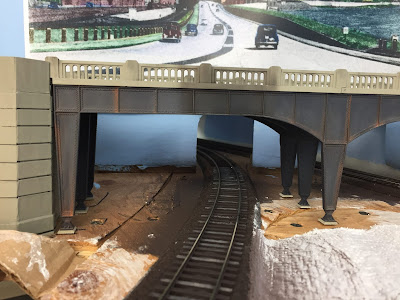 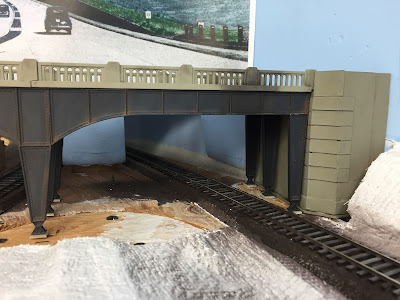 In the end, I have to admit this project took way longer than it probably should have. But with everything going on, it was nice to take my time and work on it during any tiny blocks of time I could. I'm pretty happy with the way it came out though - the goal was to make it look like it was about 5 years old, during an era characterized by steam-powered trains and high-emission vehicles.

I'd be really happy to hear what you think and whether you'd do anything differently with it, have any suggestions, etc (especially whether to bother overspraying it with Dullcote or some other fixative, at the risk of causing the weathering to disappear).

"All" I need to do now is get some scenery in under and around the overpass. Oh, and figure out what to do about the backdrop here. I'm afraid that'll be a whole other challenge....
Posted by Chris Adams at 2:05 PM