Use it or Lose it - Some Decoder Programming

There are many reasons to try and avoid long hiatuses (sic?) from the hobby, including mental well-being, making sure the layout still operates, etc. But something that maybe doesn't occur to you right away - at least it didn't with me - is how much you forget. Boy, if you don't stay in the game, pretty soon you find you've fallen behind.

Case in point: I decided to start my ramp up tonight by doing some DCC programming for my buddy Pete. He'd dropped off some New Haven DER-1s (Alco DL-109s for you non-New Haven guys) and wanted them programmed to match the others I've done for him. "No problem" I thought - what could be hard about basically copying/reading a programming file into a few new locos.

Use it or lose it, they say - and I just about lost it trying to remember how to do even that simple task. Thankfully, I'd long ago written down notes on how to hook everything up - from my NCE Power Cab to my ESU Lokprogrammer. I hooked the programmer to the test track, booted up the computer, opened the Lokprogrammer software, and realized that it has been a while since I've done this... 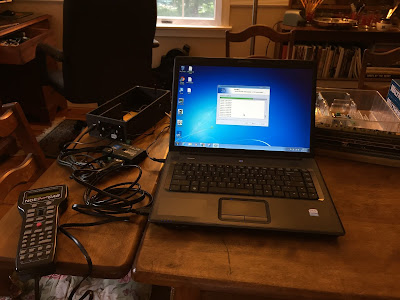 I'd missed not one, but two software updates since the last time I did this (the pic above shows the download progres....). Once everything was updated though, I was pleasantly surprised that I remembered how to do all the programming I needed to do - and after only a few fits and starts (don't worry Pete - everything's ok. Now.)

Having finished all the DLs, I decided to see if there were any DCC/programming things on my punch list I could do since I already had all the stuff out and set up. Turns out, there was: 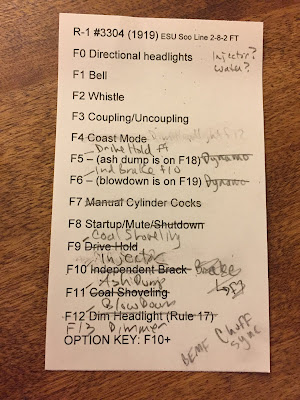 That's a loco card for the 3304 (New Haven R-1, nee Bachmann Light 4-8-2) that's been marked up a bit during the past few ops sessions. I started out with the factory settings for the Loksound Soo Line 2-8-2 but, as you can see, I and my operators decided we wanted to switch things around a bit and include a few more functions. Since this sound file is probably the most-commonly-used Full Throttle capable steam file Loksound has right now, I thought you might be interested in how I set mine up. 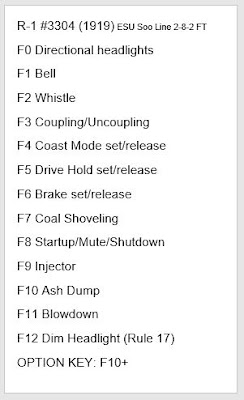 Functions 0 through F4, and F8 are the same as the factory settings. After that though, I moved Drive Hold from F9 to F5 and the Independent Brake from F10 to F6. That puts both of those functions on the screen of an NCE dogbone throttle where you can see whether they're activated.

When you're a fireman, shoveling coal into the firebox and turning on the injector are a big part of what you're doing during your run. So I assigned these functions to F7 and F9 since, while they're not visible on the screen they are certainly audible, and still just a one-button push on the throttle.

The ash dump and blowdown functions are certainly necessary before, during, and after a run - but only occasionally. So I wanted to be sure and include them, but it wasn't critical that the functions show up on the screen (since they're audible), and it's not a big deal that they're a two-button operation (since you only need them occasionally). Pressing "Shift-PROG/ESC" for F10 and "SHIFT-EXPN" for F11 on the NCE throttle gets you there.

Finally, during my era, headlights weren't used during the daytime and that's when my trains run, so Rule 17 dimming isn't critical. Thus, that function is assigned way up on F12 ("SHIFT-28/128").

My other two steamers have Soundtraxx Tsunamis in them and I really like those too, but I don't think you can beat how easy it is to remap functions on the ESU decoders - provided you have the Lokprogrammer, of course. Thankfully, the Tsunamis are already dialed in to my liking, but I'm still learning about the new ESU steam decoders.

I'd be interested in hearing about how you have YOUR steam decoders set up. In the meantime, I'm going to try not to let too much time pass before I do some more programming. I certainly don't want to risk forgetting whatever I've learned so far!