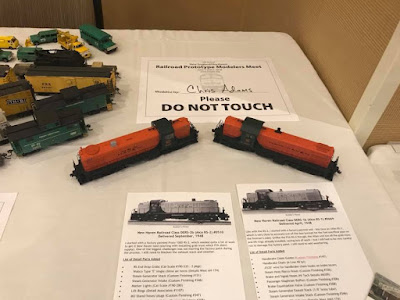 One of the best parts of a ProtoMeet is the model display room. There is where you'll find modeling in all sorts of stages - from fully completed, super-detailed, and weathered (sometimes even full dioramas), to true works in progress, just a step above loose parts in a box. And it's that variety of modeling effort that's truly educational for all of us. If we only see the completed/superdetailed stuff, as wonderful as that is, we may find ourselves getting discouraged. That is, until we see a model that's just getting started.

Including both ends of the spectrum - and everything in between - without fear of being judged (literally or figuratively) is critical. Sure, the completed show-stoppers are what most inspire us, but the works-in-progress give us a peek behind the curtain and under the hood to learn a bit how such great modeling is done.

Ideally, the modeler him or herself is there in person to answer any questions you might have about their models and modeling techniques. But all too often they're away enjoying all the other opportunities ProtoMeets have to offer (attending clinics, meeting with vendors, and - of course - shopping for more cool stuff). Unfortunately, all that's typically left with the models is a piece of paper giving you the modeler's name and asking you not to touch.

If you've gone to all the trouble of getting your models to whatever level they're at and getting them to the show, this post is a very light-touch request that you try and provide a little info about the models, especially if you're not going to be at the table very much. It may answer a lot of the questions folks would otherwise have, and it'll definitely help them appreciate what it took to create your scale representation of the prototype.

Here's a close-up of something I included with my display at this year's NERPM: 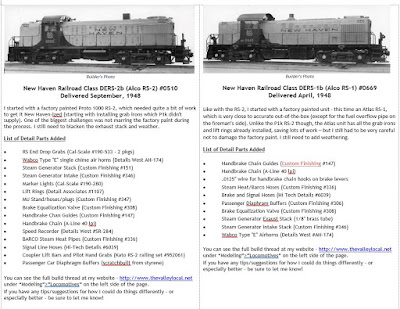 Since I had two engines I wanted to share, I included photos showing the prototypes for my models (especially helpful and fun at a ProtoMeet), and little bit of info about the prototype itself. I then described what model I used as a basis for my project, along with a brief description of some of the challenges I faced. I rounded it out with a list of parts I added to give folks an idea of the scope of the projects. The photos and the parts list encourage comparison between the prototype and the model - exactly the sort of thing I want my fellow modelers to see and appreciate.

This certainly isn't a full-blown how-to article - just some notes to help folks see better what you've done. And maybe they'll get a few tips from viewing your efforts. That's a big part of what I go to ProtoMeets for, so I want to be sure and reciprocate.

Now, my notes are admittedly a little busy and may contain a little too much information. If that's not your cup of tea, then might I suggest a more subtle, elegant approach: 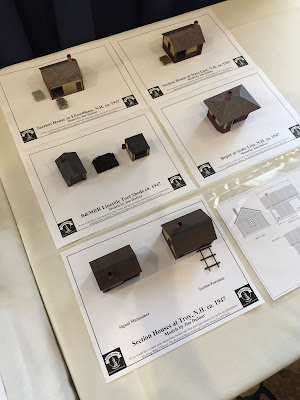 This is Jim Dufour's display of some of his structures. Not a lot of text, but what's there has a lot of impact: a short description of the prototype, a scale drawing, and a nice family look among the sheets of paper - including logos from his chosen railroad. In this case, the quality of the modeling speaks for itself.

Don't be surprised if at the next ProtoMeet you see that I've outright stolen this idea for myself :^)

I hope you'll give some thought to how you share your modeling efforts. Providing at least a little info will help your models tell your story when you're not able to be there in person.
Posted by Chris Adams at 4:31 PM