I had my latest Valley Line Operating Session last Friday, but it almost didn't happen.

I fired up K-1b #278 and started to move it in position - and it promptly started shorting. It's been giving me all sorts of fits lately - can't figure out why - so after about 10 minutes, I decided to substitute an Alco S-2. That worked fine - until it hit the reverse loop - then it shorted and stopped.

And nothing - I mean nothing - I could do could get it to work. The whole reversing section was dead.

After almost an hour(!) of fiddling, checking connections, pulling on feeders (and hearing members of my crew arrive and - worse - enjoying themselves upstairs, without me), I was ready to grab my wire cutters and start cutting out things.  That's when BillS - who had joined PieterR downstairs to help - said "try it now." I saw out of the corner of my eye what he'd done - he was on the other side of the peninsula in East Berlin, but I could see him a little bit through the "tunnel" in the peninsula backdrop. I couldn't believe what he'd done - but I tried moving the Alco forward.

And it moved as if nothing had happened.

I'm only going to say this once since it's an embarrassing admission: I'd left a track gauge on the East Berlin track. Bill noticed it and removed it.

Rookie mistake, for sure.

But, in my defense, it never even occurred to me that I'd left metal across the tracks. If that gauge had been anywhere else on the railroad other than in the reversing section, the layout would have shorted as soon as I turned it on. Since it was on the reversing section, it just managed to shut down that section - but gave no indication of a short. It just seemed like the section was dead.

So, an important lesson learned: If your layout isn't working, always Always ALWAYS do at least a quick check to make sure you've left nothing metal across the rails. You may not see a small track nail easily, but a 12" long track gauge should be easy to see and pull off.

Other than this pre-session drama, the rest of the evening was a success - and BillS also treated us to a couple of special guests: 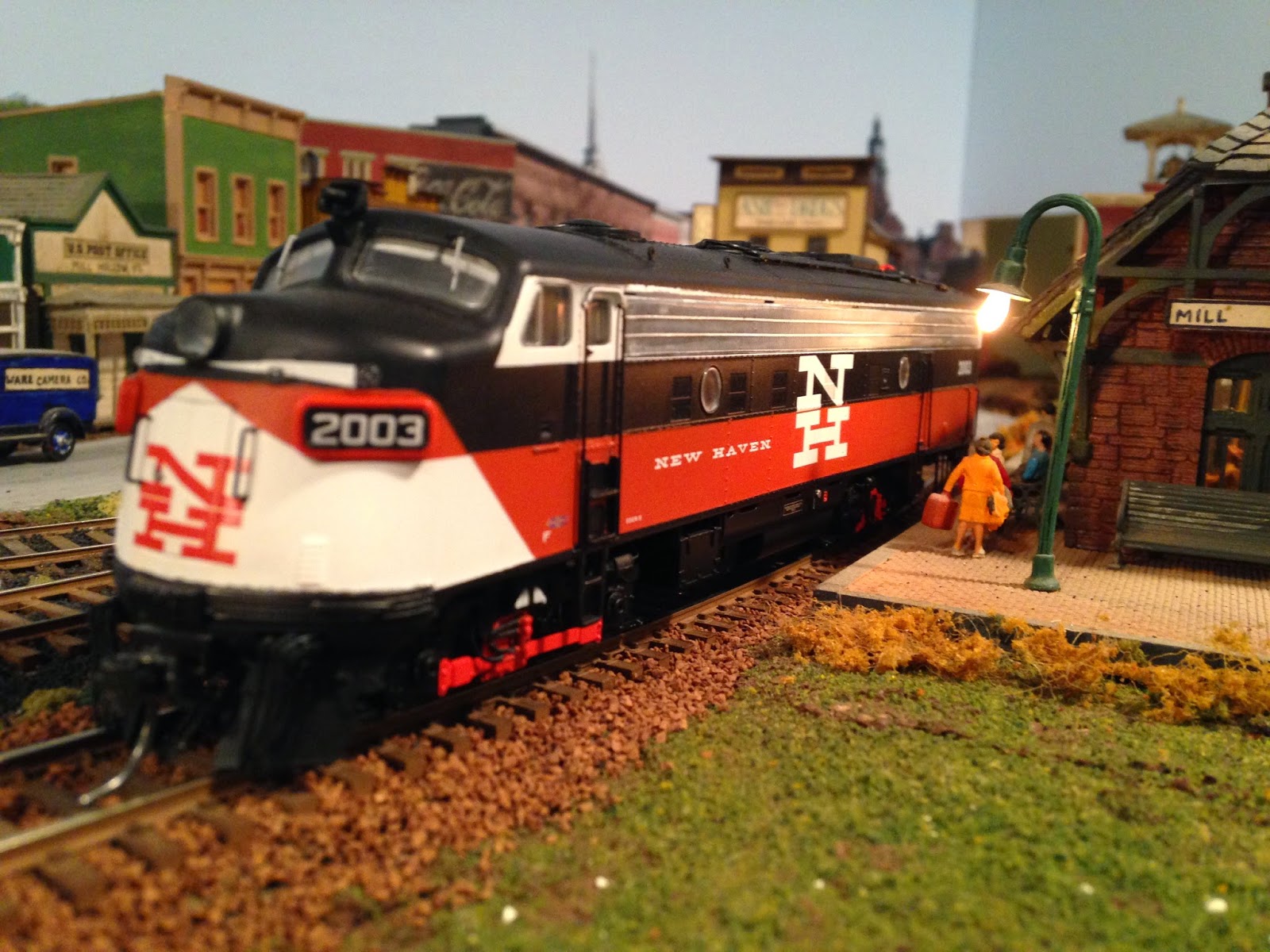 Since he's one of the main go-to guys at Rapido, he'd brought the demo of their latest offering - a New Haven FL-9. Since the prototype didn't arrive until 1957, it's 10 years past my era. But it still looked pretty cool on the layout (even if a bit out of place). The amount of detail on this engine is truly spectacular - every, and I mean EVERY, detail you can discern on the prototype is present on the model. And it's 1:87th scale. Truly amazing.

But that wasn't all. I'd heard about the FL-9 but I hadn't heard - much less seen - another cool Rapido product, soon to be available: Operating Switchstands! 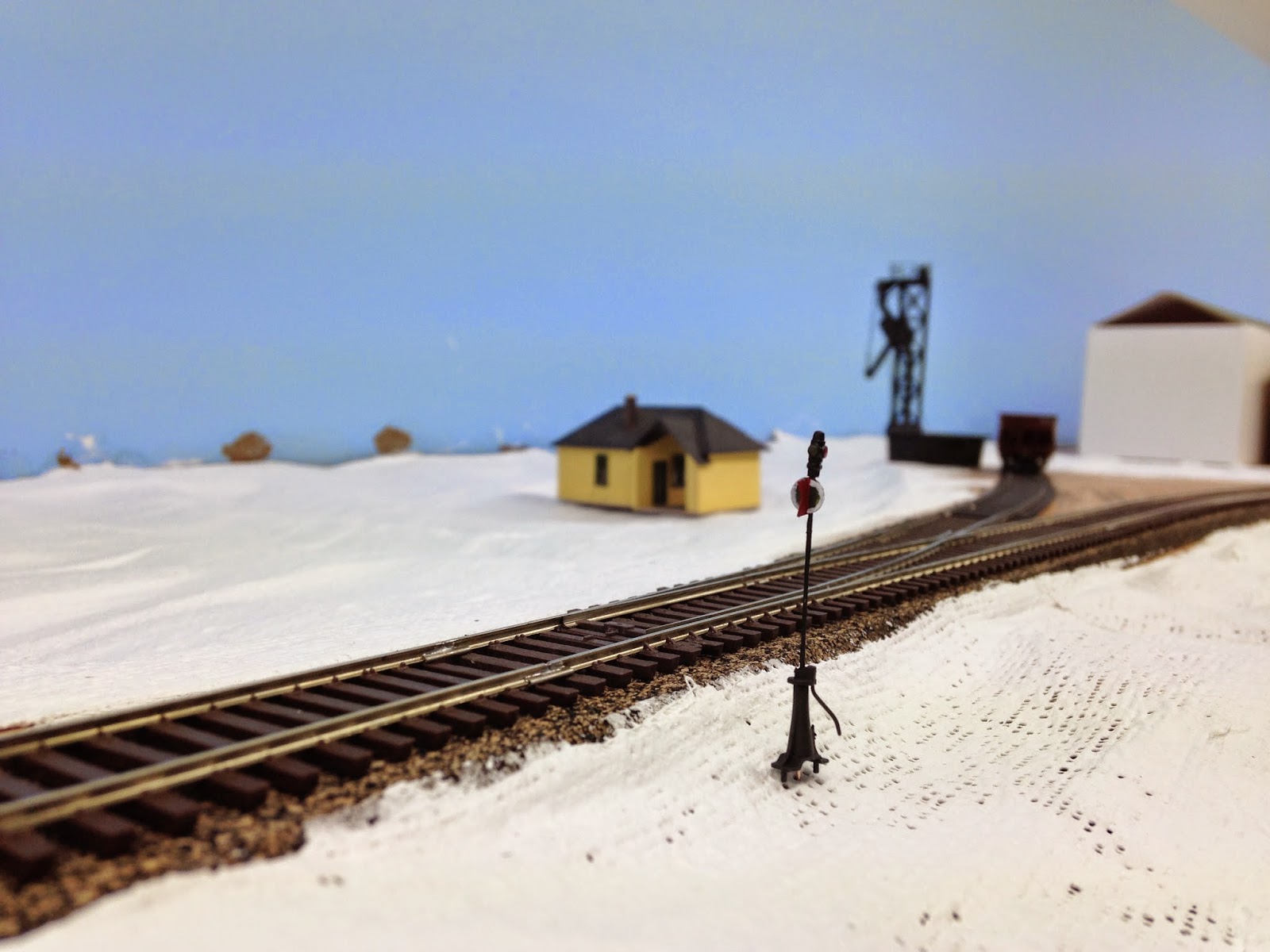 Yes, ladies and gentlemen, you will soon be able to add authentic, prototype-specific switchstands to your layout. This is, of course, the New Haven (and Rutland and O&W) version. Yes, the targets turn with the hand lever. If you connect it to the machine, it'll move the turnout points as well (and provide polarity, etc). Now I just have to go back and add headblocks to all my turnouts!

Be sure to visit http://www.rapidotrains.com/ for more information and details about these exciting new products.

Speaking of guests, this ops session was also notable for the introduction of a new crew member. BruceE - Valley Railroad engineman and O&W caboose owner - finally got a chance to join us and operate the Valley Local.

I trained TomD on agent's duties, so I had a bit more time to roam around and enjoy the railroad being brought to life. Especially since - after Bill got that gauge out of the way - it now could have a life at all!

And I took advantage of the down time to get a head start on a major expansion project - which would be the focus of a Valley Line Work Session the following day. Stay tuned - details on that will hopefully be the subject of the next post!
Posted by Chris Adams at 1:46 PM