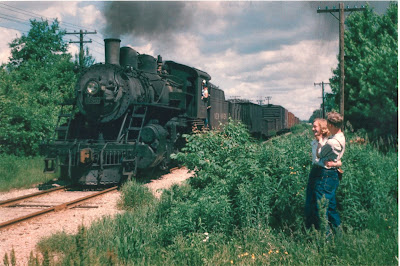 It's the Summer of 1948 and John Wallace, along with a couple of friends, hear the southbound Valley Local whistling for Nott Street in Wethersfield. They had just enough time to get down to the end of Fernwood Street to watch the train pass. Holding down the left side of the cab, John sees his friend Dave Corsair, in his trademark white t-shirt (nervy for a fireman) and Dave must've yelled over to engineer Bill Beaupre that John had his camera out, because Bill popped out of the cab window too, just as John clicked the shutter. And thus was preserved forever one fleeting moment, an all-too-brief glimpse into a beautiful summer day in 1948. 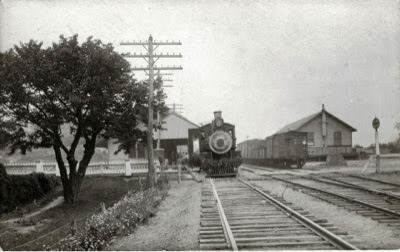 Another shot of a southbound Valley Line train, this time at East Haddam/Goodspeeds - though I'm not sure if this is the Valley Local freight. It's early 20th century - certainly pre-1933 - so it could be a passenger local, stopped at the station. The passenger station is there on the left, but it's long gone today. The freight station remains, somewhat modified and added to. The grade crossing is present-day Route 82. The Connecticut River is just out of view to the right, If we could pan right, we could date the photo based on whether the East Haddam swing bridge is there (built 1913). No matter what the era, the right-of-way and surroundings are immaculate - and the entire scene is inviting. What would we give to be able to climb aboard that train today?
Posted by Chris Adams at 2:00 AM