Here's my First Cardboard Webbing Strip!  It's like the Golden Spike, except it's done at the beginning, and it's not track.  But it's a milestone nevertheless.  This strip is at the location of the Route 15 overpass that marks the beginning of the "on stage" portion of the railroad.  As such, the resulting slope is no problem and, in fact, has to be there.

But as I mentioned in my last post, I'm much less confident that continuing this slope southward will be a good idea.  There's no such slope on the prototype, but the height of the bottom of the backdrop makes such a slope necessary (you have to attach the strips to something).  Since I won't know how much of an actual problem that is until I can see it, I decided to just dive right in...


Once I got the strips installed far enough south to get to the Ballantine site, it started getting real - you can see below where I've mocked-up a flat base & the Silas Deane Hwy...
And you can see how steep that slope is going to have to be to get from the flat industrial area to the Hwy.  Here's a current-day comparison to give you an idea of what the prototype looks like:

So you can see that this slope is all wrong - what I've got is more in tune with Appalachia than the flat CT river valley. 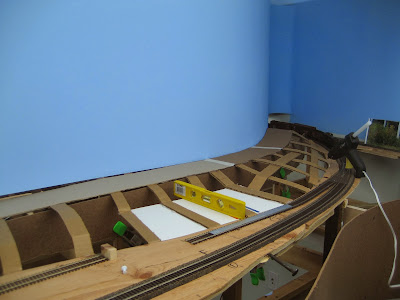 To try and get at least the Ballantine site flatter, I hot-glued some foamcore board to the bottom of the strips and to allow me to press the strips down as much as possible - and to not cause the Silas Deane to tilt at the same time - you can see that I temporarily installed a strip of masonite on edge to support the east side of the Hwy. (see it clamped in place below the webbing). Problem is, I don't know whether I'll be able to remove that masonite and expect the terrain to stay in place.  But you can see where I've started installing the "horizontal" strips to the north to create the hopefully-sturdier basketweave. 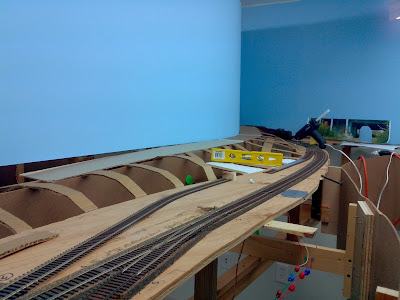 So this is where things sit at this point.  It's not a bad looking scene, but it looks all wrong to me considering the prototype.  I figured I'd live with it for a bit and see if I'd feel any better about it, but I'm not optimistic. I'll probably rip this all out and rework it.  Pieter and I have been kicking around some different ideas, but so far I think the best approach may be to just add a 3" strip of masonite to the bottom of the backdrop, to give something lower for cardboard strips to attach to - and thereby make this whole area as flat as possible.

While I'm at it, I'll probably also install some more plywood to provide a solid, flat base for Ballantines.  As I mentioned in my last post, I should have anticipated this need and provided for it when I planned & cut the plywood for this area.  Fortunately, the L-girder benchwork I used is pretty easy to modify when necessary, so this should just be a matter of installing some additional risers to support some additional plywood.  Then I can do the cardboard lattice again.

At least now, I've got some experience doing that so it shouldn't take as long the next time....
Posted by Chris Adams at 7:45 AM