Prototype modelers by definition model buildings, scenes & equipment that actually exist - or existed.  Problem is, the further back in history you go the harder it is to find information/photos/etc.

Now that I have a couple successful operating sessions under my belt, I thought I'd turn my attention to creating some authentic scenes for the trains to travel through.  Starting at the north end of the railroad, the first stop is P. Ballantine & Sons beer distributors & Wethersfield Lumber Company, both in the vicinity of Jordan Lane in Wethersfield.

Problem is, there are ABSOLUTELY NO photos of either Ballantine's or Wethersfield Lumber. I'm still looking, but I don't have much hope. So what's a prototype modeler to do?  Just freelance (in a limited way, admittedly, but still...)?  Well, maybe that won't be necessary.  This post will introduce how I'm handling the problem...

First stop, check out the Sanborn map of the area.  If you're a prototype modeler, you probably already have maps of the area that you used to help plan your track.  These cool maps not only show track arrangements though, they show at least the footprint of the buildings too.

Here's the Sanborn map of the Jordan Lane area of Wethersfield:

I'm not sure why there is no siding shown at Ballantine's - maybe it wasn't put in yet when the map was produced; maybe it had just been removed; maybe it's just an oversight.  But I know from multiple sources that Ballantine's was, in fact, served by the railroad in 1947 - and the loading dock that's shown on the east side of the building shows the likely location of the siding (despite a fuzzy aerial photo that seemed to indicate the siding curved to the west side of the bulding).

In addition to the Sanborn map, I also have the benefit of John Wallace's personal recollections of the area during the era I'm modeling.  And also fortunately, John's memory is as sharp as a tempered steel blade...  So when I asked him if he remembered at all what Ballantine's looked like, here's what he emailed me:

﻿﻿ Notice where the siding is - right where expected, along the loading dock on the east side of the building.  Followup questions elicited some additional information:  It was of brick construction, the loading platform was covered and the freight doors were spaced to match boxcar doors.  The platform and building were 3 cars long and the siding was a total of 5 cars long.  There was also a track bumper at the end of the siding.  All the windows were on the south side (Jordan Ln), where the office was.  There were no windows on the east or north side (the west side will face the backdrop).

Ok, with a rough idea of how the prototype building looked, how large was it?  Again, the Sanborn map helps, providing the building's footprint.  You first have to figure out the scale of the drawing, which - due to zooming/enlarging - may actually be different than what the scale rule on the drawing itself.  Once you determine a dimension in prototype feet, it's then fairly easy to convert to model (actual) inches using a standard scale ruler alongside a regular ruler (or, for HO scale, you divide the prototype measurement by 87 and convert the resulting decimal to inches)

Incidentally, a 40' boxcar is a good standard of measurement - especially in HO scale, where a 40' boxcar is about 6 actual inches long.  So the Ballantine siding, if modeled full size, would be about 30" long (5 cars).  The siding I have is 3 cars long (about 18"). 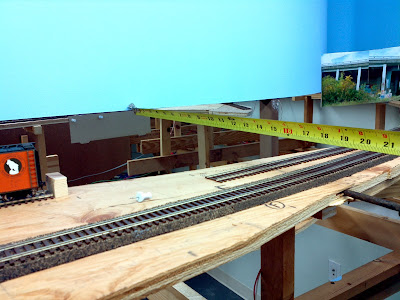 When I went to measure my space, I got a few nasty surprises:

1) Since the prototype terrain here is relatively flat, my backdrop is WAY (about 3") too high, which will require including an unprototypical slope unless it's fixed.  Lesson: Unless you're modeling mountainous terrain, the bottom of the backdrop should always be at least even with subroadbed level. Not sure yet what - if anything - I'm going to do about this.

2) To save material, I tailored my plywood subroadbed to support track only & should have extended it to support anticipated buildings as well.  Lesson: You may not know ahead of time where buildings will be, but your plan should at least show where "signature" buildings/towns are and you should provide nice flat support for such areas.  I figured I could create a flat area at the scenery stage with my cardboard webbing.  That may not be as easy as I thought - especially in this case when I'm trying hard to avoid too much of a slope.

3) According to the measurement above, there may not be enough room for Silas Deane Hwy between the building and the backdrop, especially if the building is modeled full-size.

Since the building might end up against the backdrop anyway, I tried a mock-up that curved the siding from the main in order to gain more seperation, with the result below: 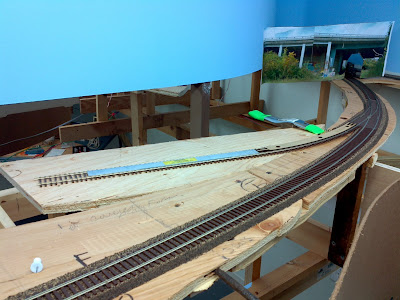 Initially, I liked the look of this, so grabbed an old building to enhance the mock-up: 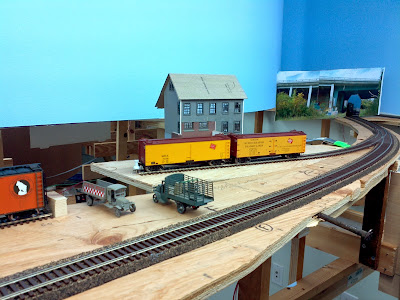 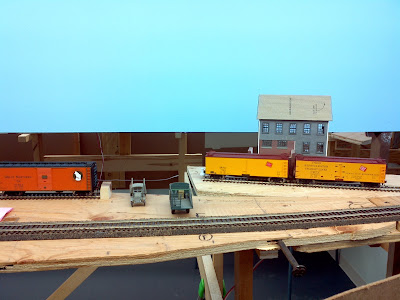 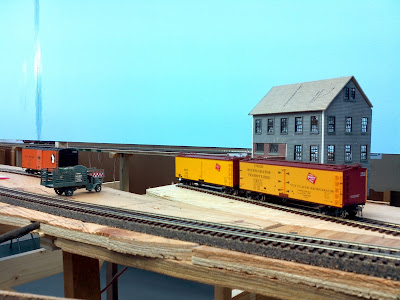 It's starting to look like an actual scene now (and that's pretty exciting). Unfortunatley, with the high backdrop (and resulting steep slope imagined behind the building), it doesn't look much like Wethersfield. Concern about such facts is one of the things that seperates a prototype modeler from a freelancer. A freelancer would be fine keeping such a nice scene as-is. Me? I've got to make it look as close to my prototype as I can.

So, setting the "slope problem" aside for the moment, I remeasured to see how the prototype building might fit with the more-curved siding:


While I was measuring building footprints, I figured I'd get a quick view of how Wethersfield Lumber Co. (WLCo) might fit.  Looking at the Sanborn map, there were a number of buildings associated with Wethersfield Lumber, but the largest was the lumber shed at the end of the siding.  In HO scale, it would be 21" long...
Um, yeah.  Not going to model the lumber shed full-size then.  Selective compression by like 70%?  Looks like it.

Once I got over my initial shock & depression re WLCo., I decided to see if I had a more-appropriate building on-hand for Ballantine's.  Here's what I found:

Looks pretty good to me.  Seeing how it would fit was only a matter of taping the inside corners of the walls and setting it up: 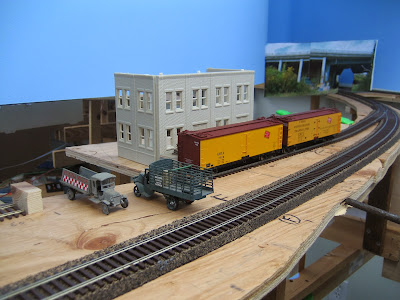 Notice I've moved the siding back toward the main to provide some space for Silas Deane Hwy. (and a hopefully more-gradual slope) between the building and the backdrop.  The above shot shows the building mocked-up, unmodified.

Here's the same building with two walls butted end-to-end along the Jordan Lane (south) side to make a more-imposing industry: 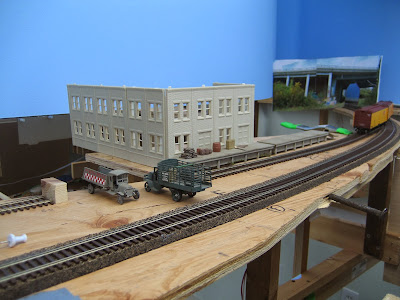 Cool loading docks too!  Incidentally, another lesson (or thing for me to keep in mind for the future): Have as many of your buildings/bridges/loading docks/etc built beforehand as possible. ﻿This certainly makes it easier to mockup things and see what you really have to work with.  It's not always practical, but if you don't have a layout yet, your hobby time would be well spent building stuff ahead of time.
So, this is where the Ballantine's Beer Distributors scene is currently.  It's clear I'm going to have to compress things.  Is the building (especially the unmodified/smaller version) large enough to justify rail service (two cars' worth)?  And if I decide to move the turnout north and thereby lengthen the siding for more cars, I'd have to make the building even larger.  Any recommendations?  I look forward to hearing/reading what you think.
Next, I think I'll try my hand at some scenery - at least some scenery support (cardboard webbing) - and see whether that slope/backdrop problem is as bad as I fear it may be...
Posted by Chris Adams at 11:48 AM