And I thought I was so clever...

I've been pretty proud of myself that I've been able to model the New Haven Railroad's CT Valley Line just about "perfectly" from Wethersfield to Middletown.  By "perfectly" I mean I've included on my layout almost every single turnout the prototype had.  Sure, I've had to compress the linear feet/miles of running track so those turnouts are much closer together, but they're all there.  So I have a prototypically accurate railroad.

Not quite.  Not yet, anyway.

It looks like I've made the rookie mistake of allowing my imagination to write checks my space can't cash. In other words, I've assumed everything will fit - and in my mind's eye, it will.  Folks building their first layout usually make this mistake at the track planning stage.  They look at the space they have and they imagine the layout they're going to put in that space.  Unfortunately, they usually imagine that MUCH more can fit in the space than actually can. They imagine 30 car freight trains running comfortably along a 10 foot wall - forgetting that, in HO scale at least, the cars alone will take up 15 feet - and that's not counting the engine(s) and caboose!

Well, *I* wasn't going to fall in THAT trap.  No, not me.  Sure, I didn't plan my layout in the traditional sense, using drafting paper or even track planning software.  I took what I think is a better approach: I did my track planning full-size, on the floor: 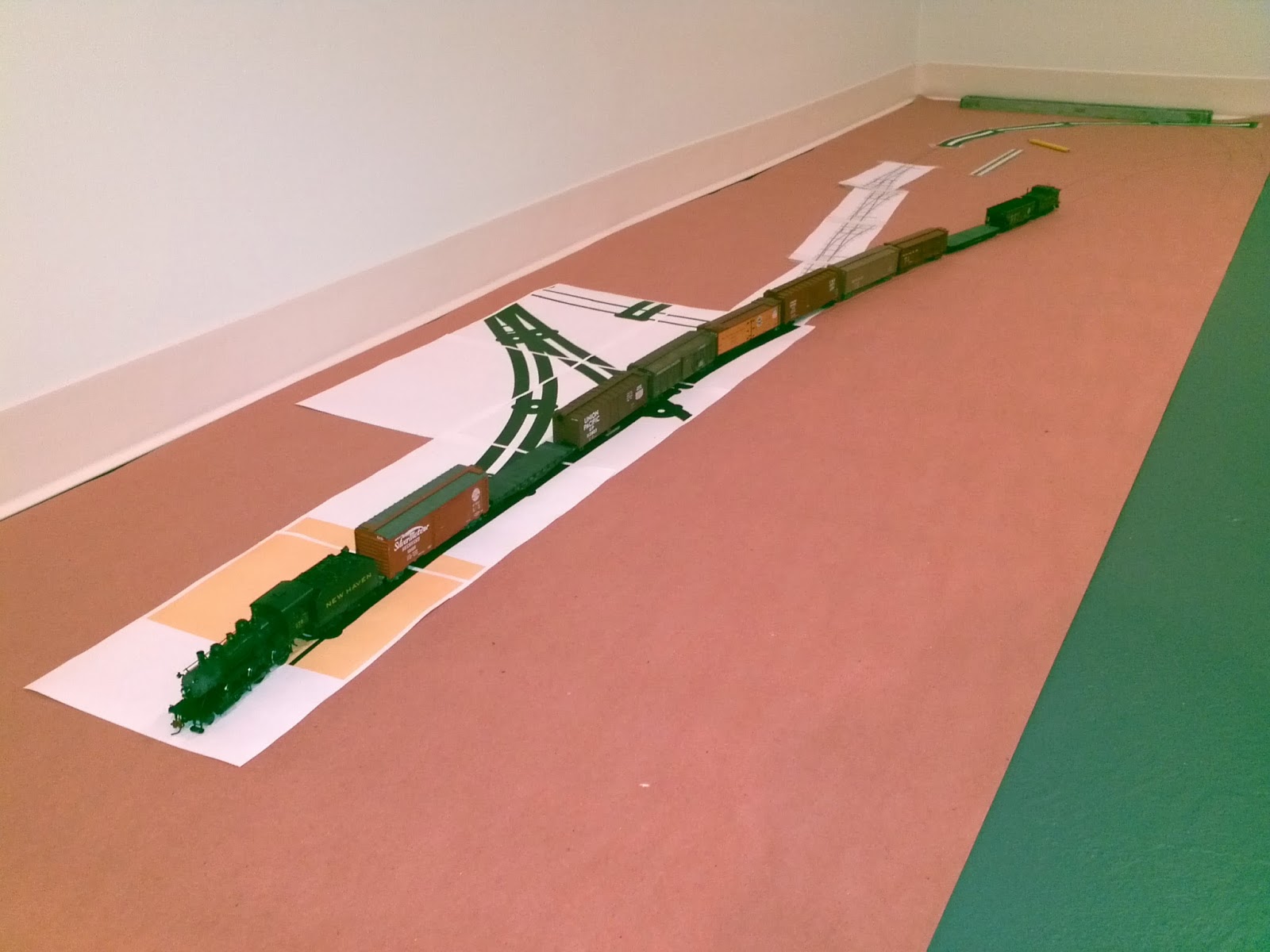 This is where Middletown would end up.  Once I discovered that a train would fit - and look "right" - I knew my layout concept would work.  Fitting Middletown was my biggest challenge; now that that was "solved" I'd just work out from there.

So for the past months, I've been pretty smug & self-satisfied happy with how the layout has turned out. Since I followed the prototype track arrangements so well, the layout has operated - not surprisingly - just like the prototype. But a true model railroad - especially one you want to use as a time machine of sorts - includes much more than just track.  It has to include buildings & scenery too....

Pieter was over for Train Time Tuesday last week and (shame on me) I didn't have anything really pressing or ready to work on.  So I used him as a sounding board to explore "next steps" in my layout construction which, now that the track is down and the ops sessions have gone so well, are buildings & scenery - specifically in Wethersfield.

Every time I imagine Wethersfield, I envision the Ballantine's beer distributor, Wethersfield Lumber, the station, Gra-Rock Bottling, Valley Coal.  Everything fits - in my mind.  Unfortunately, it looks like I've made the same old rookie mistake - just at a later point in the layout construction process.  I'm modeling in HO scale, but my imaginary buildings - the ones that all fit "no problem" on my layout - are apparently N scale or, worse, Z scale.

I did a pretty good job of planning the track layout, but my lack of planning for structures and scenery is becoming painfully apparent now.  I've never gotten a layout past the benchwork & track stage.  I wonder if this "N scale thinking" is one of the reasons why.  Usually, once I discover that my imagination is so constrained by my space, I become frustrated and start over.

Well, I've come too far to rip everything out and start over.  The track plan itself is sound, as attested by the successful & prototypical operating sessions.  And even if I did rip everything out and redid it, I can't imagine doing it much differently, considering my space and what all I want to include.  I guess I could eliminate Cromwell, but that doesn't get me much.  I could move Middletown yard further south and thereby expand it, but my problem isn't too little track - it's too little space for the buildings/structures/industries I need.

So since I can't retreat, I must advance - full speed ahead.  I'll have to develop some good selective-compression skills pretty quickly and start getting better - much better - at what I consider the real "art" of model railroading: the ability to capture the essence of a prototype scene, it's essential elements, when you have only a fraction of the space in which to do it.

If the result of my effort conveys the prototype faithfully enough so that people recognize it for what it's supposed to be, then I know I'll have succeeded.  Otherwise, like any other rookie, I'll just have to "try, try again" until I get it right.
Posted by Chris Adams at 5:14 PM