I didn't realize it at the time, but forty years ago today I embarked on a lifelong hobby. And it was entirely by accident.

Among the many gifts my little brother and I got that Christmas morning was a computer and a train set. While I was into computers, all the attention was on the train - especially since it prompted my great-grandmother, who happened to be visiting, to tell us about my great, and great-great, grandfathers' careers on the old Illinois Central Railroad. I'd always been into history, but the combination of family stories and a fascination with miniatures was pretty compelling. The computer faded into the background as my dad and I "helped" my kid brother with his train set.

The limitations of a simple loop of track prodded us to find a local hobby shop to get more track - and maybe even some "switchouts." Once there, if I'd just been nibbling around the hobby before, once I saw my first issue of Model Railroader, the hook was now firmly set. I had no idea you could actually recreate history in miniature like this. I'd always been fascinated by museum dioramas, but these dioramas were way bigger - and had action! And you could create whatever world you wanted, limited only by your imagination.

Ah, the dreamings of a young model railroader - no matter his (or her) actual age. Subsequent weeks and months followed a pattern familiar to many: dreaming about layouts and track arrangements, being confronted by limitations of space and time, the uneasy detente with other things competing for one's time, money, and attention. . . Is there anything quite like those early days, when the future is full of possibility and, not unlike Schrodinger's cat, you're just as likely to create a masterpiece as fail in the attempt?

It's been 40 years today since it all started. The train set disappeared over time (although the power pack survives to light the Christmas layout, pictured above), my hobby pursuits have gotten much more sophisticated, and my ambitions more realistic. But every once in a while, I get another taste of the initial excitement I experienced all those years ago.

And a gift from my mom & dad around Christmas last year (actually, for my birthday, which is a week later), provided a huge helping  - just in time for this year... 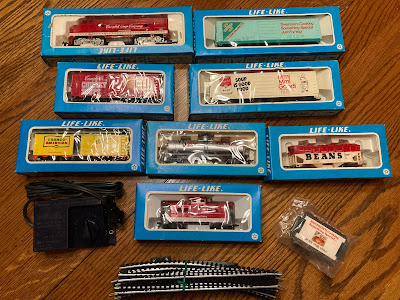 Yessir - that, my friends, is a bona fide Campbell's Soup train set, "Limited Edition 1982" - exactly like the one from that long-ago Christmas. Over the course of time, I'd forgotten what the cars looked like, but the red and white F7 diesel was instantly recognizable. Of course, it's more than just an old train set - it's wonder and dreams and possibilities distilled into metal and plastic. It's a reminder of my entry into a hobby that's given me a chance to meet people from all walks of life from all over the world, that's provided hours of stress relief (while sometimes inducing stress), that's helped me develop a number of different skills - many of which I've been able to use outside the hobby.

Most of all though, every time I see it - especially now that I have it set up around the Christmas tree - it reminds me of being full of hope, anticipating wonderful possibilities, and looking forward to the future. And isn't that the essence of being young, if not chronologically, at least young in heart?

Here's hoping this Christmas that you're able to capture and hold on to the joy and wonder of the season, to be a kid again - if only in your outlook - and to enjoy time with family and friends.

And if someone you know gets a train set for Christmas, beware - you may just have a front row seat to the start of a lifelong passion. 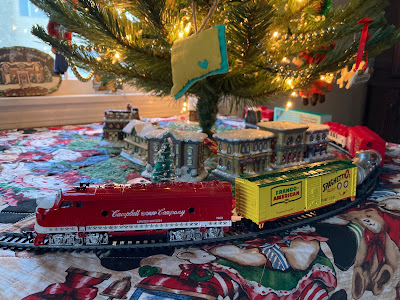