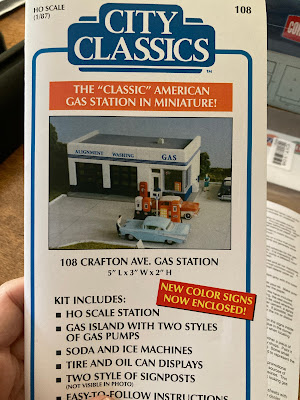 As a small tribute to my friend Jim Sacco, who recently passed, I decided Cromwell needed a gas station. The Sanborn map of the area indicates one existed south/east of the tracks and on the east side of Middlesex Turnpike (aka Main Street), but there's no photo. So I figured Jim's archetypical "Crafton Ave. Gas Station" would fit the bill nicely. Follow along as I start what's turning out to be a pretty easy build... 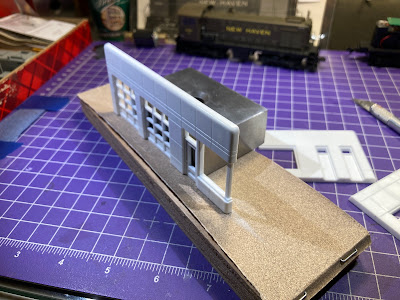 The instructions are straightforward, so I'll just emphasize a few important steps which I found especially useful. While "all you have to do" is glue four walls together to get the basic structure, a little time and patience will ensure a good build. In the photo above, I'm making sure the bottom of each wall is perfectly square. Due to the moulding/casting process, they have a slight taper which should be removed or else you risk gaps between the structure and its foundation. 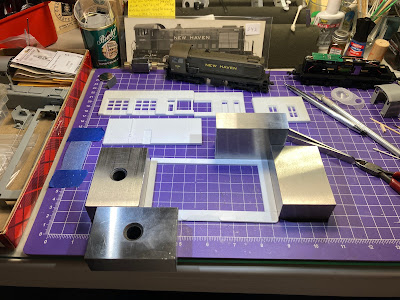 Speaking of the foundation - I wish it was all in one piece, but - alas! - it's 4 separate parts which must be glued together. Again, patience with your sanding block - not to mention some assistance from 1-2-3 blocks - will make things perfectly square, which will in turn help everything else square up properly. 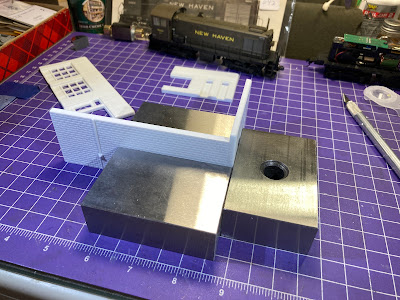 More use of the blocks to keep the walls square as I make one corner, and then the other... 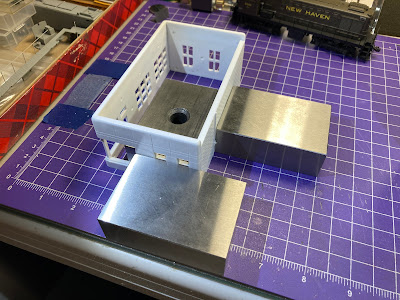 . . . culminating in all four walls being glued together, nice and square. 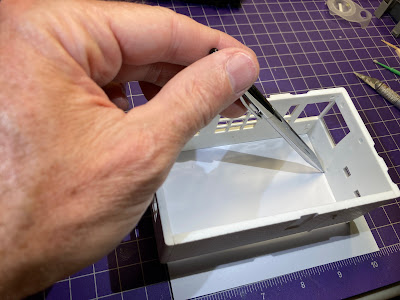 The roof is made from a sheet of styrene included in the kit. To get the proper size & cutting lines, I turned the structure on its head and traced along the inside. 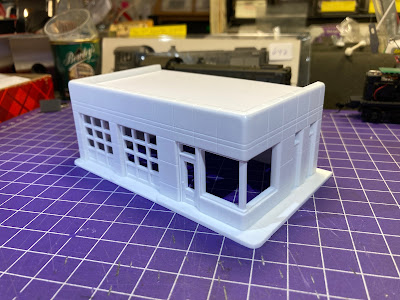 Here's the mostly-completed structure, with the roof dry fit in place and resting on the foundation. 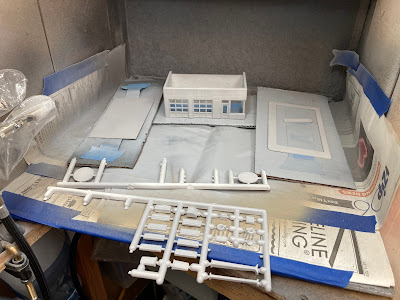 With the four walls assembled, I decided this was as good a time as any to paint. To replicate the "porcelain" tile walls, I used a rattle can of Rustoleum gloss white. While I was at it, I went ahead and painted the rest of the white parts on the sprue (gas tanks, oil can racks, sign parts, etc). 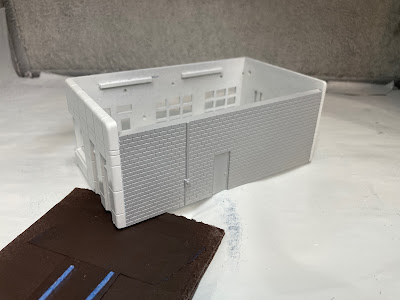 Once the white was dry (it took a LOOOONG time for the Rustoleum to cure fully - like almost a week! Be careful when handling that you don't make fingerprints. Ask me how I know...), I masked the "porcelain" and shot the rear "cinderblock" wall with some rattlecan gray. I also sprayed the foundation and gas tank island with the gray, and painted the roof a flat black. 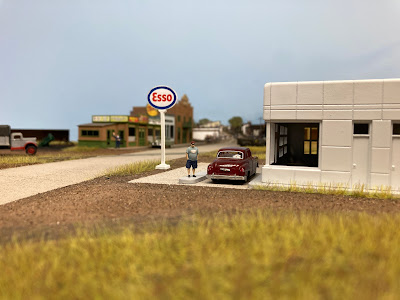 I had visitors coming over, so I quickly made up the sign (after confirming with my muse, John Wallace, that the prototype station was more likely to be an ESSO station than anything else) and placed the station temporarily on the layout. The explanation I came up with is that the station had been abandoned, but recently sold to someone who's in the process of restoring it. There are no windows or gas tanks yet, but the sign is up and there's a fresh coat of paint on the walls. At least that was my story and I'm sticking to it ;^) 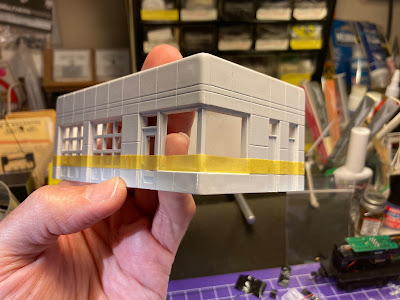 Once the visitors were gone, it was time to make some more progress. Based on the prototype photos I've been able to find (beware - old gas station photos are a HUGE, though very enjoyable, rabbit hole), ESSO stations had a wide red stripe along the bottom. So I started by masking as closely to the "foundation" panel as possible. Even then, there were a LOT of little ridges and edges to deal with - especially over the garage doors - but tucking in with the toothpick helps a lot. 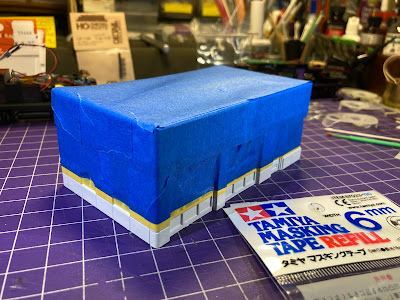 I used Tamiya masking tape for the critical edge, and then finished up with regular low-stick masking tape. Now we're ready to paint the stripe!
After reviewing my paint collection with my color consultant (The Missus), we decided the closest color to the red in the ESSO sign was Apple Barrel Red Apple (#20784) craft paint.
Now, I'm not going to get into a debate here about whether shooting craft paint through an airbrush is a good idea or not. Your mileage DEFINITELY will vary. But I have a huge collection of colors, they haven't gone bad, and with the proper preparation, I've had very good success at airbrushing them. 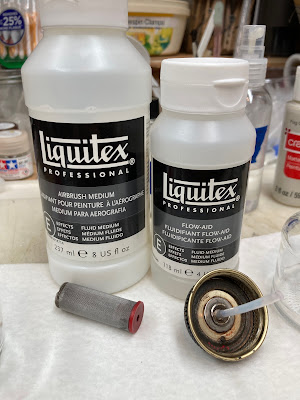 This article gave me the idea, and I've been following it ever since.  The main points to remember are to add airbrush medium and flow aid to your paint. For extra insurance, I also use a strainer in my color jar. 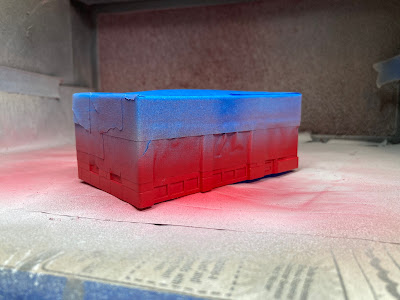 It admittedly took a bunch of coats to build up the color for complete coverage, but the paint dries fast (especially when aided with a hair dryer *ahem*) so I was able to do 5-6 light coats over the course of 20 minutes or so. 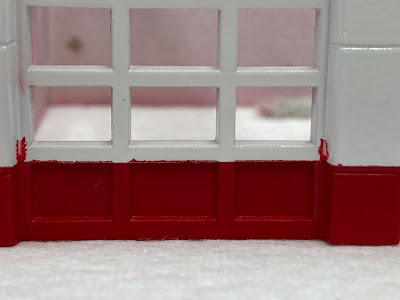 I couldn't be happier with the coverage I got, but as you can see in the photo above, my masking over the big doors wasn't as perfect as I thought it was. 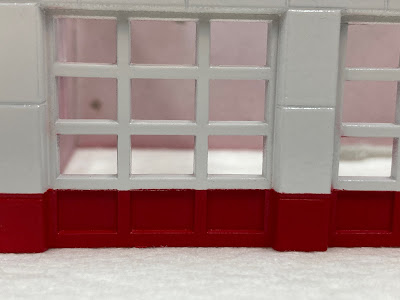 Thankfully, it cleaned up REALLY easily. Maybe it was the combination of craft paint over glossy lacquer paint, but I just scraped at the paint with a toothpick and you can see the result above.  I'll just be VERY careful not to scratch the paint elsewhere! After I add decals, I'll be sealing all of it with a clear coat. 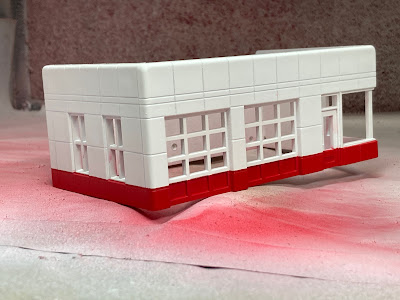 Speaking of decals, that's really all that's left to do on this structure (well, other than a rudimentary interior, adding window glass, assembling/decaling the pumps, adding the island light, etc.), so it's back to the prototype photos to review lettering, positioning, and such. Thankfully, after looking ALL OVER for decals, I finally found what I was looking for during my recent trip to PA - and at the last hobby shop I visited. 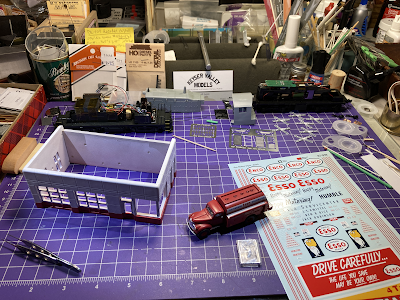 I also picked up an ESSO tanker truck at another hobby shop. It, the station, and my SW-1 are all on the bench now awaiting further attention - as soon as my current house project wraps up(!)
Thanks for continuing to follow along here at the Valley Local, especially as my progress occurs in fits and starts. Your feedback and encouragement really helps keep things moving forward!
Posted by Chris Adams at 2:44 PM