Folks following the Valley Local group on Facebook have been hearing of some on-going trouble I've been having with my brass steam locomotives (which I mentioned in an earlier post, here). At least one of the steamers (#359) definitely has some shorting issues; however, as I've been troubleshooting things, I've discovered another, deeper, issue that may have been the source of my trouble all along. . .

My reversing sections. I just cannot seem to get an auto-reverser to work properly.

By way of background, I have my layout divided into different power districts. Each power district receives its power directly from the NCE PowerPro (5amp) command station/booster, and through a Tony's Trains PSX circuit breaker.

I have 3 reverse loops and 1 wye, all of which have - for years - been protected by Tony's Trains PSRev auto-reversers (the PSRev is the predecessor to today's PSX-AR). These auto-reversers are wired in between the power bus and the reversing section it controls. And - as mentioned above - the power bus in each power district comes from and is protected by a circuit breaker.

However, like PSX-ARs, the PSRev is a combination auto-reverser and circuit breaker. I've just recently learned (totally my bad) that the PSRev should therefore get its power directly from the booster, and not be inline after another circuit breaker (although my setup hasn't created any problems in the past).

The reversing section I've diagrammed below is the easiest for me to work on, so I'm starting my troubleshooting there. As you'll see, I've disconnected the PSRev (auto-reverser w/built-in circuit breaker) and replaced it with a Digitrax AR-1 (auto-reverser only) since the AR-1 can get its power from an adjacent power district, rather than from the booster.

And, not having its own circuit breaker, is has Only One Job - autoreversing the polarity so it matches.

Problem is, I cannot get that AR-1 to work properly, no matter where I set the current trip point (which can be set anywhere from .25A to 8A). Every time a loco confronts a non-polarity-aligned gap, the PSX circuit breaker of the power district the loco is coming from, trips.

There is no way this should be so difficult, so I must be missing something (hopefully not something TOO obvious, but I'm desperate enough not to be embarrassed no matter what mistake I've made).

So, check out the diagram below. I've also provided pics of the instructions from the AR-1. FWIW, I tried using a DPDT toggle switch to manually change the polarity of the reversing section as needed, and it of course works perfectly - just not automatically. :^\

Let me know what you think in the comments below - or, if you really want to point out something obvious that I missed, contact me via email ;^)  Here's hoping I can get this figured out soon! 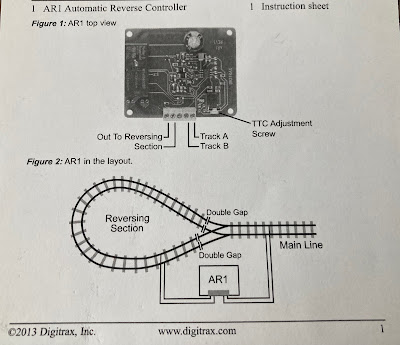 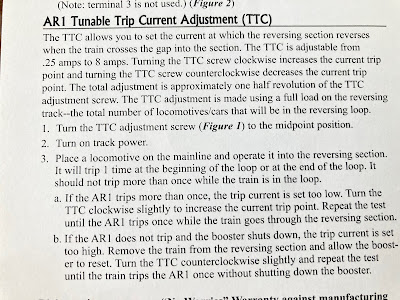