Here's a case in point: Trackwork. Specifically, turnouts. Now, unlike scenery (just to think of a random example), I have NO problem jumping right into trackwork and trying all sorts of crazy things. I don't know if it's because I think of trackwork as a "left brained" type of thing - or if it's because most of my experience gets up to (and tends to stop) at the trackwork level, so I've got lots of practice doing it. I dunno - but the point is, I haven't any problem trying new things - and (here's the important point) redoing them if necessary.

The point of the case in point is... POINTS. Namely, that one of them came desoldered recently... 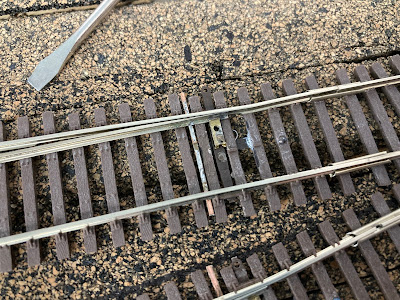 I noticed this as I was backing a cut of cars into this staging track (during one of my recent "solo ops" sessions). In a long ago (and ill-advised) attempt to save some money on turnouts in staging ("it's 'only' staging"), I tried to make some old Micro-Engineering turnouts "DCC-friendly" by isolating the frog and cutting through the metal throwbar, reinforcing the points by soldering on a new/additional pc strip throwbar - as you can see above.
But moving the points manually (as in, with fingers) apparently, over time, will tend to work the solder joint loose. And that's what happened here - one of the points came unsoldered.
Now, I could have "just" resoldered the point - but the more I looked at it the more I figured that would be hard to do and may not have worked anyway. I'd probably end up unsoldering the OTHER point in the process. It's one thing to solder all this together at the bench - it's a different story to try and do it in place.
And, of course, there's no guarantee that the failure wouldn't just happen again sometime later.
So, since I happened to have a right-hand #6 turnout on-hand (albeit, an Atlas rather than M-E), I decided to just replace it instead. 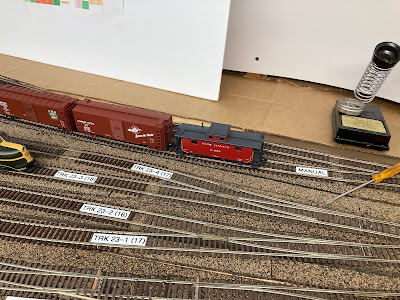 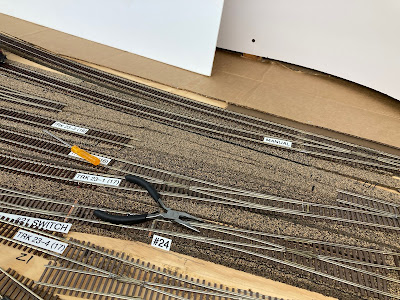 The geometry of the Atlas turnout is slightly different than the M-E turnout, but the length is very different. So I had to trim some of the surrounding flex track to fit. 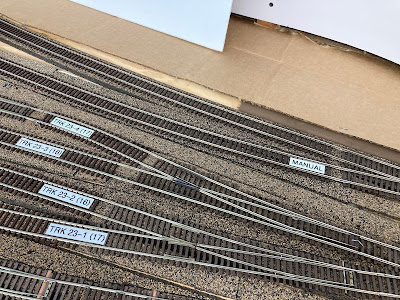 Also, since - unlike the M-E turnout - the Atlas turnout doesn't have a "center-over spring" that locks the points in place, I had to fabricate my own from a piece of scrap piano wire. 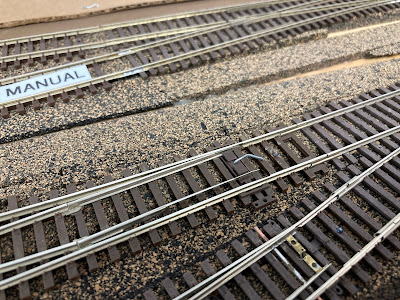 Thankfully, since this is staging, I only need it to work - I don't need it to look that great (though, admittedly, this is how *all* the turnouts on the "Airline" modules are thrown).
For the "on-stage" portions of the layout, I prefer the look of the Micro-Engineering turnouts. But the Atlas turnouts a pretty bulletproof, IMO, so are a perfectly suitable replacement in staging. And - as you can see here - pretty easy to change out if you find it necessary.