There's a punch line from an old joke about golf that you don't have to be good at it to enjoy it. Well, as I'm starting to build my weathering skills, I find that I'm really enjoying the process - even if my efforts don't turn out quite as I'd hoped. And I'm discovering that weathering - like so much in the hobby - can't be learned from research, reading books, or watching videos. Those are all great ways to start and they do help - a little. But to really learn how to do it, you have to do it.

And you're gonna mess up. It's not a matter of whether but when & the sooner you accept that - if not outright embrace it - the happier you'll be. And the quicker you'll develop some skill.

So follow along as I attempt to weather this structure, make some big mistakes, and correct them... 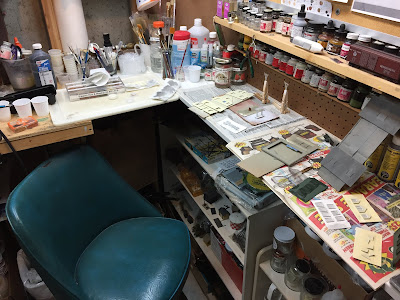 And at that point, I decided that would be enough for this session. "A man's gotta know his limitations" - at least when it comes to plowing through weathering. Sometimes, when plowing, it's best to take a break, pull back a bit, and make another run at it. Doesn't mean you quit - and especially doesn't mean you never start - but when developing a new skill, taking a break gives your brain a chance to absorb - and really internalize - what you've learned.

Despite some of the frustrations though, my efforts here were just what I said at the beginning - VERY fun! Of course, it helped that nothing melted :^) nothing got ruined, and I was able to correct the many mistakes I made. But I'm learning a lot. And, most importantly, weathering really starts bringing the model to life!

If you haven't tried weathering, I hope you will. Like golf - among other things - you don't have to be good at it to enjoy it.
Posted by Chris Adams at 12:01 AM