(I mentioned at the end of an earlier post that it's been a tough winter for dads. Fortunately, my dad is doing great after his bypass. Unfortunately, The Missus' dad isn't doing as great - this is the 3rd time he's gotten cancer and he starts intensive chemo this coming Wednesday. Things have been, as you can imagine, very busy between family stuff and work stuff and time on the layout has predictably suffered as a result. Thank you for your continued thoughts and prayers. Very much looking forward to things getting back to some semblance of normal at some point.)

Turns out it's been a bit over a year since I "finished" the cab bus for the layout. But operating sessions have a way of adding things back onto the punch list that you thought you were done with.

Case in point: on one of the feedback forms after my last ops session, KayleeZ mentioned how nice it would be if there was a throttle plug (UTP) over by East Berlin. Apparently, the UTP at Wethersfield was just a little too far to work East Berlin comfortably.

So, I split the line at the Wethersfield UTP and - since the new UTP would be at the end of the branch (therefore no need to daisy chain) - I just used an inexpensive phone jack. $2 vs. $15. Here's how I did it. 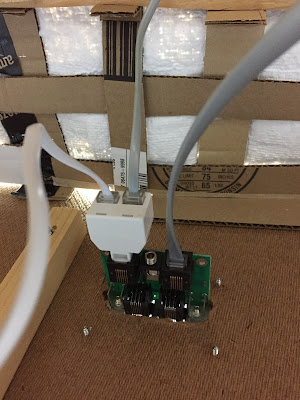 An ordinary phone line splitter does the trick, as you see above. Just be sure you split off the outgoing jack (the one that doesn't say "CMD STA"). In the photo above, the line on the right is coming in from the command station. From the splitter, you have the line going out to the radio antenna (center wire) and the line going off to the end-of-run UTP. 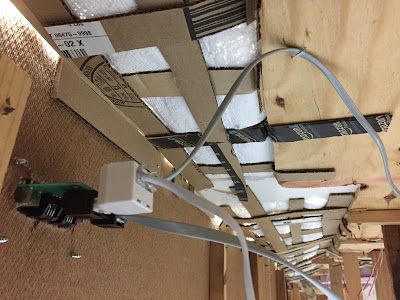 Another thing to note is that the connection between the splitter and the jack may not be optimal given the weight of the wires and the splitter itself. The splitter will tend to droop, losing contact and there'll be no juice/signal going through it. So here I've just pulled the center/antenna wire up and stapled it to the underside of the layout to pull the splitter up to maintain contact. 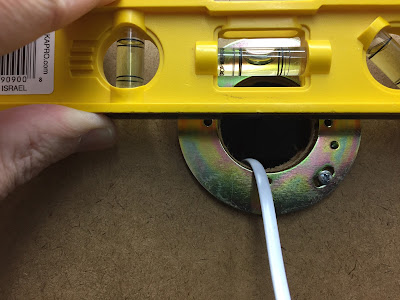 Next, I marked where I wanted the jack to go and used a hole saw to cut the hole. I then used a level over the two faceplate mounting holes and marked them so the jack would be nice and level. I also marked & mounted the brass mounting base.

The last important thing to keep in mind when using a standard phone jack (at least with an NCE cab bus) is that the cab bus/phone cord wires have to be "run through." It's a bit hard to describe, but you can read about it in the NCE manual (where it talks about making your own cab bus cables). Essentially, if you're using standard phone cord, you need to remove the RJ11 jack from one end and reinstall it "upside down" so that the internal wires will match the NCE standard. 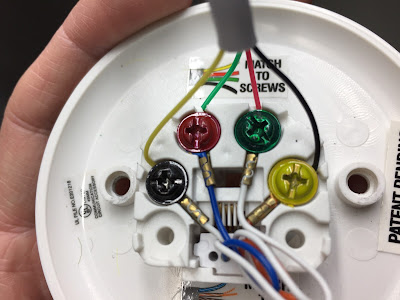 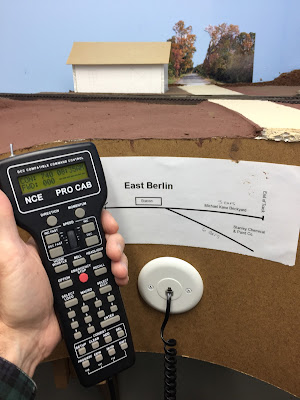 So there you have it! A handy-dandy UTP in East Berlin for Kaylee or anyone else wanting to plug in here. It's not really necessary since I do have wireless throttles and such, but it's always nice to have the added insurance of a tether.

Given everything going on these days, I don't know when I'll be operating next but hopefully my crews will get to try this out soon!
Posted by Chris Adams at 4:07 PM