So now that it's done, I figured this would be a great time for a recap and to get all the pics and information together in one place (click here and here for previous posts on this build).

As you may recall (or not, if you're new to this here blog...), I got started on this project at a "hands-on" clinic at this year's NERPM. Don Valentine graciously provided an Accurail single-sheathed boxcar kit (model 4000/4200) and some extra parts (Standard Car Co. #1000) to convert the kit into a door-and-a-half boxcar. 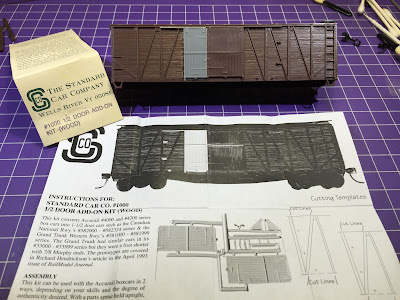 Along with the kit and parts, Don also supplemented the conversion kit instructions with a multipage document which included a description of the prototype, a diagram, and some photos. The parts instructions also mentioned Richard Hendrickson's article on these cars in the April, 1993 issue of Railmodel Journal:

And I came across this list of additional prototype information:

but I'll be dipped if I can remember where I got it. If you recognize this list, please let me know so I can provide proper attribution.

The build was very straight-forward: just follow the instructions carefully. As you can see in the first pic above, I was able to get the door positioned and glued on very quickly - during the clinic AAMOF. Drilling the holes for the remaining details was a different story however...


The instructions for the conversion parts provide a couple of handy-dandy drilling templates which you cut out for positioning the holes (see above, and below)... 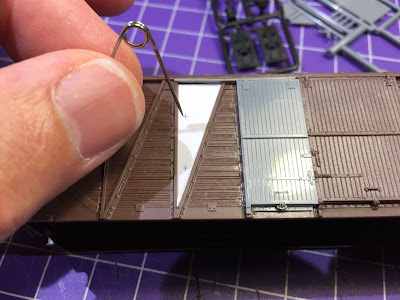 But BEWARE! Make sure that you cut out the template to the correct size so that the hole is located, um, correctly. 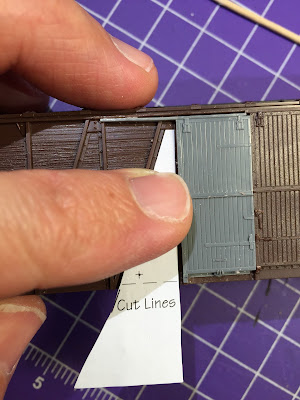 As you can see above, I inexplicably cut off the pointy tip of this template. And you may recall from a previous photo that I snugged it up to the top - as I thought I needed to. However, that resulted in a door cleat location that was MUCH too high. See below: 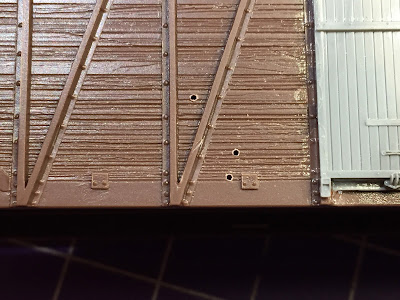 Focusing on the two holes on the right: the top one is where I drilled based on the template's first location. If I knew then what I know now about freight car construction (or at least door cleat placement), it would have been obvious to me right away that I was locating the detail too high. The lower hole is better - but it should still have gone lower to match the height of the other cleats. No worries - a little dab of body putty filled in the incorrect hole.

LESSON: Use templates with caution & always go with what you know to be correct despite what the template tells you. Or - rather - just make sure you cut out the template properly(!)

After the "hole drama" there was little else remarkable about the standard build. Here's a photo with all the conversion parts attached to the car: 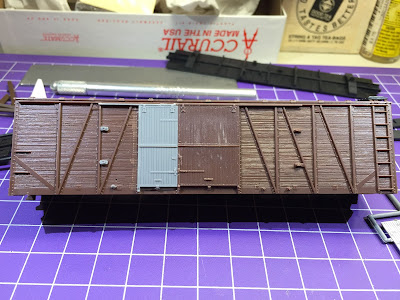 You can readily see what a difference the parts make to the over all look.

Next step was to secure decals. Don mentioned that Black Cat Publishing had the correct ones, which you can find here. 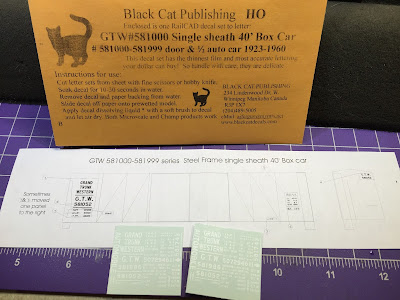 Just as I was about to start decaling, I got some - er - feedback suggesting that I might want to remove some of the molded-on detail, at least the side grabs.  Well, I did the side grabs... 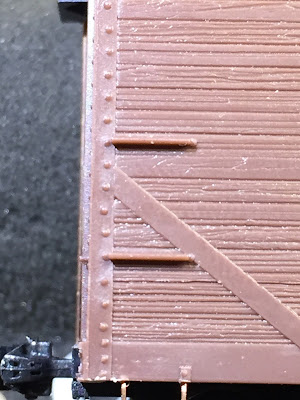 ...and the end grabs (not pictured) and the lateral roofwalk corner grabs . . . 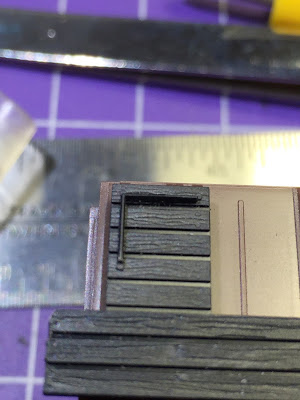 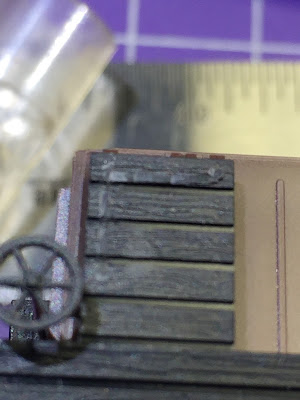 Yeah, I got a little carried away with my favorite chisel (which I highly recommend, btw), but the result was definitely worth it: 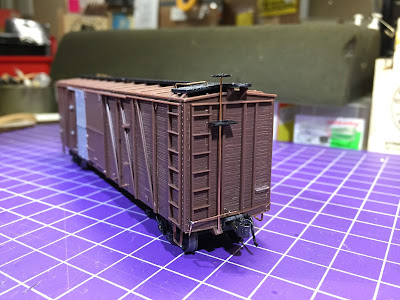 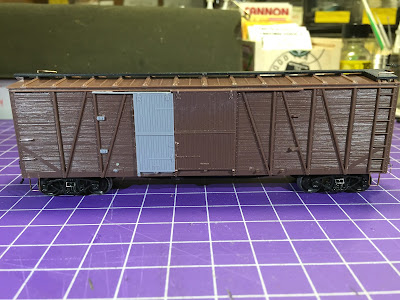 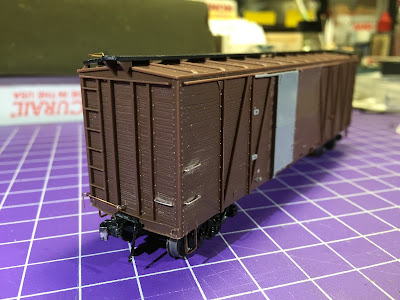 As you can see, in addition to adding separate wire grabs, I added A-line stirrup sill steps (sorry Ted), scratchbuilt a couple of uncoupling bars, and added KD airhoses. After all that was done, the car was finally, really ready for the paint shop.

Since there are usually long spells between my painting freight cars, I "get back into it" by starting with the underbody and trucks since they're pretty hard to mess up. So my airbrush and I got reacquainted and I shot the sideframes first with some grimy black (being careful to mask the bearing holes). Then I used a microbrush to apply my mixture of grimy black paint and baking soda to the wheel faces. I think this really does a great job of simulating the caked-on oil, grease and dirt so common to steam era freight car wheels. It's hard to see, but *I* know it's there and it makes me strangely happy. Click on the image for a closer view: 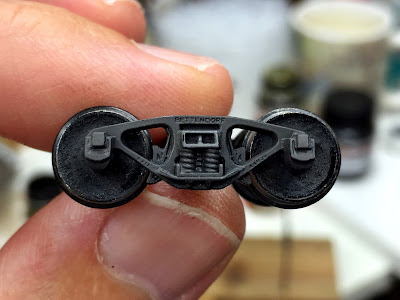 I sprayed the rest of the underbody with the grimy black and then tackled the carbody with a rattle can of Tamiya Fine Surface Primer. It ain't cheap, but it's really good and easy to use. (btw, I did the painting after cleaning all the parts and carbody using a toothbrush and denatured alcohol).

The carbody itself was a little more challenging. Don suggested using AccuPaint AP-54 "Rich Oxide Brown" as a good color for CN cars (and appropriate for GTW cars as well), but I had TruColor oxide brown on-hand, and I plan eventually to weather the car moderately to heavily, so I went with that.

Only problem was, my paint had gelled in the bottle. I'd heard you could thin it with acetone, which is what I did - at a 2:1 ratio(!). At least it went through the airbrush without clogging - but the bad news was 1) it took MANY coats to get enough coverage from such highly-thinned paint, and 2) using the acetone made the finish flat rather than glossy.

Fortunately, before I dove into decaling, Bill saw the carbody and said he could tell I used gray primer. Apparently, the body still wasn't adequately covered - and I hadn't noticed since it looked So Much Better than before. So we shot it a couple more times with less-thinned paint and let it dry for a bunch of days.

Next step was to apply my cool new Black Cat decals. Now, my process for decaling earlier cars - which also had a very flat finish - was to apply Future floor polish to the model, place the decal on that, and let it dry. I'd then add decal setting solution on top of that. That process worked ok, but for some reason it resulted in some white residue which I had to deal with. Not a big deal, but a little annoying.

This time, I decided to go with a more tried-and-true method:


It took a few applications and since I was doing each side & end separately, the whole decaling/setting process took a few evenings, but the result was worth it:

A note about decal placement on this particular model. I followed the diagram included with the decals. Mostly. Which is to say, the left end of the car followed the diagram precisely; but on the right end the decal wouldn't fit between the rib and the ladder, so I moved it one panel to the left. I've seen prototype pictures that show the dimensional data on the panel I chose, but those cars also tended to have the weight data (the data on the left side of the doors) one panel to the right of where the decal diagram puts it. So, in the spirit of full disclosure, the lettering on my car is a hybrid at worst.

Of course, if I'd removed the cast-on ladders and substituted grabs instead (as the GTW did (parent CNR used ladders)), the decal probably would have fit. If this were a contest car - and/or if I wanted to spend more time on it - I would have gone to that trouble. And I would have done the underbody piping too (which I skipped since the silhouette created by the frame's center beam makes its absence less apparent). 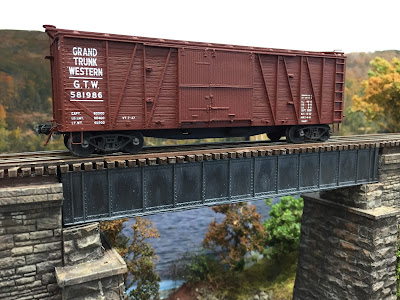 But for a work-a-day boxcar (and, based on my last ops session, I Need More Boxcars), it's perfectly fine. It has enough stand-alone details added so that it fits in with the rest of the fleet - and the price was certainly right (the car/parts were supplied, $8 for decals, and I had the other details on-hand). Looks pretty good, I think, and once it's weathered even the little compromises I made will matter even less. Bottom line: it's done - and has provided the extra added benefit of generating more modeling momentum!