Christmas has started a little early this year thanks to my friend Randy. Now, Randy isn't Santa, of course, but he must at the very least be one of his helpers (a.k.a. an Elf) since he worked a little Christmas magic recently. . .

Long-time readers know I occasionally work as a fireman on the Valley Railroad - which is particularly cool, since I get to actually fire a steam engine on the line I'm modeling. But while I'm fully kitted up for work (including authentic reproduction New Haven Railroad Thompson cap, NHRR lantern & oilcans), it never occurred to me that something critical was missing and that it was actually possible to fill that void.

But last Friday, The Elf (a.k.a. Randy) showed up to our latest Valley Line work session with a Very Large Box, wrapped in Christmas paper. I had absolutely no clue what it was (my best guess was flextrack or roadbed) and even when I got the first peek at what was inside, I still had no idea what it was. 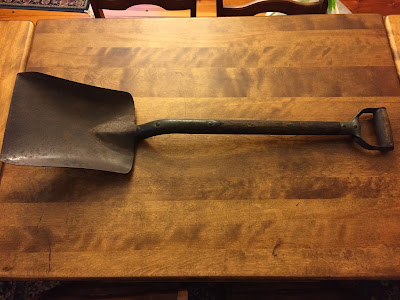 Yes ladies and gentlemen, boys and girls - you are seeing an Authentic New Haven Railroad fireman's coal scoop!! The Elf told me he found it on eBay, but I'm convinced that there was much more to it than that - nothing less than a Christmas Miracle can explain how this lowly shovel made its way down through the years to once-again be used to fire steam engines on a New Haven RR branchline. I've never even seen one of these before, much less had any hope of actually owning one.

And how do I know it's a real, live NHRR scoop? Cuz' in the great (and especially wonderful for collectors) tradition of railroad inventory practice, it's actually marked . . . 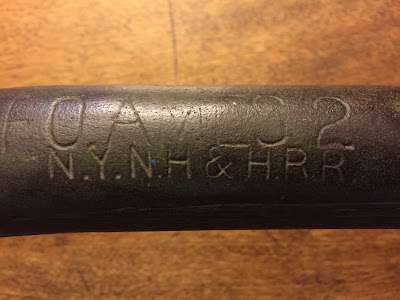 Yup, right there on the metal neck:

And if that's not enough proof, even the wood handle is engraved . . . 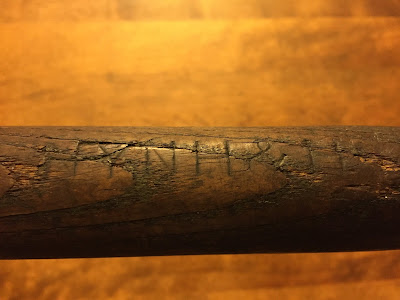 This marking is a little more worn, but still easily discernible.

Being the history buff I am, I wanted to learn more about this lowly implement of the fireman's trade. As much as I love history and time-travel, I often maintain that we live in the best time today because we can pick and choose the best from the past (not to mention we have better healthcare) - and how cool is it that I can do a quick search on my phone for "Ames shovel" and find a pdf scan of the complete 1926 Ames Co. catalog(?!)

So I thumbed through the virtual pages, looking for a #2 shovel that had the "I-D-L" handle and the welded blade - a few minutes later, I found it:

The piece-de-resistance? It's an Adams(!) I don't know if The Elf knew about that little tidbit going in, but it certainly underscores the little Christmas Miracle he performed.

I can't wait to (re)inaugurate my "new" shovel and give it, once again, a taste of bituminous coal and hot fire. I still can't believe something like this even still exists, much less that I am now the proud steward of such an amazing artifact. Thank you Randy for such an awesome and thoughtful gift! It's obvious that your skills as a Christmas Magician are formidable - Santa himself should be worried to have such competition!
Posted by Chris Adams at 8:16 AM