L-girders and Other Supporting Players

Now that I have my aisles roughed in, I'm rarin' to go with building - and hopefully finishing - my benchwork. I actually started so fast, that the only photo I have of me ripping a 2x12 down to 2x2 legs is this pic of the aftermath:


But I should have checked my supplies first. One of the reasons I said it's important to rough in your aisles is to get an idea of the footprint of your benchwork, which - in turn - will give you an idea of how much benchwork material you need.

Well, suffice it to say that I must've used a lot more material for the staging area than I thought. What appeared to be "more than enough" material sitting on the floor (and awaiting a flood that, fortunately, never came), ended up being just enough to make up the L-girders and a couple of supporting legs - and even then, I had to splice a few shorter 1x2s together to complete the flanges.

While L-girder benchwork generally goes together very fast (stay tuned and I'll try to prove it), there are a couple of places where things need a lot more thought and so go much more slowly. Case in point: where the Valley Line leaves Saybrook Junction and heads to Essex - through the wall... 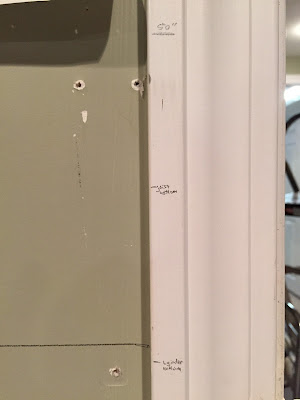 First I needed to figure the exact height the subroadbed would be. Unfortunately, it's not enough to just measure how high the end of the Saybrook benchwork is and use that measurement - the basement floor may be uneven, and even a small undulation can make a big difference in HO scale. So I took my 4' level, rested it on top of the Saybrook benchwork, swung the other end to the wall and made my mark showing where the top of the benchwork would hit. I then transferred this mark to the Essex side of the doorframe. Thus: 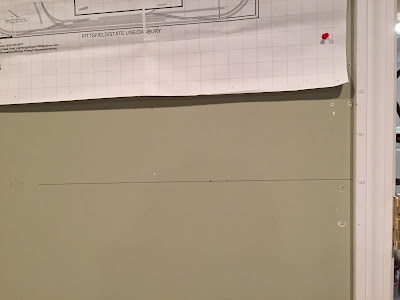 Why so many marks? That's how I determined where to put this 2x4: 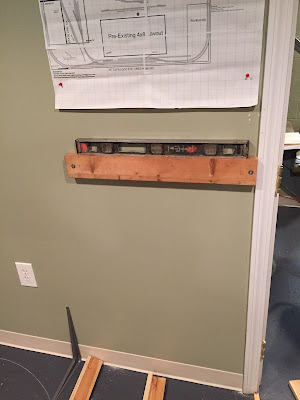 There's a more technically-correct term for this, but I just refer to it as my "L-girder end support." It's what one end of the Essex/Deep River peninsula L-girders will rest on, instead of legs. I do whatever I can to to reduce the number of legs under my benchwork. They just get in the way.

As you can see, not only must the top of this support be at the correct height, it should be level. And it's screwed directly into the wall studs. It ain't goin' anywhere. 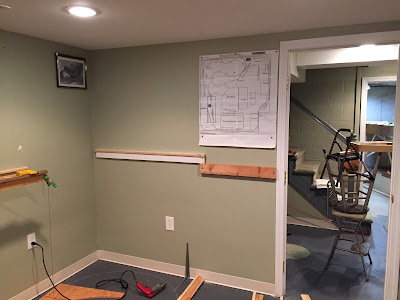 Next, I installed the back L-girder which will support the joists under the turnback curve between East Haddam and Deep River. Again, it's screwed directly into the studs - and that shelf bracket on the floor will support the right end of the front L-girder to elminate the need for a leg there. 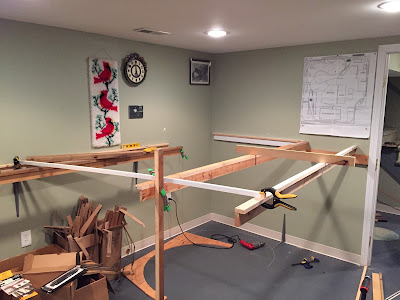 And here's where I ended up by the end of the evening: you see the peninsula L-girders coming toward you, and a joist across showing the layout height. They're supported on the far end by the 2x4, and on the near end by a temporary leg (itself temporarily anchored to the wall with a 1x1 clamped to it).

This is as far as I could get before having to make another trip to the lumber yard for more 1x2s (leg braces) and 1x3s (joists), but it's really cool to start seeing the peninsula taking shape.
Posted by Chris Adams at 12:30 AM