I hate to admit it, but I can no longer even think about being smug about not wasting my time watching TV. Truth be told - after the workdays I've been having lately, I've enjoyed sitting down in front of the boob tube "just while eating dinner" (ya gotta eat anyway, right?). But boy, once you're in that catatonic state, it too-often takes much more willpower than I can muster to get off my duff and down to the basement. Fortunately, tonight was different.

I finally got to do some more mocking up of my Big Expansion - which is to say - my extension of the Air Line "south to New Haven" (staging) and my construction of the "Shoreline" (return loop). But in my mocking up, I hit a bit of a (rail)roadblock - and that's where I hope you can help. I'll let the pictures help me describe my problem: 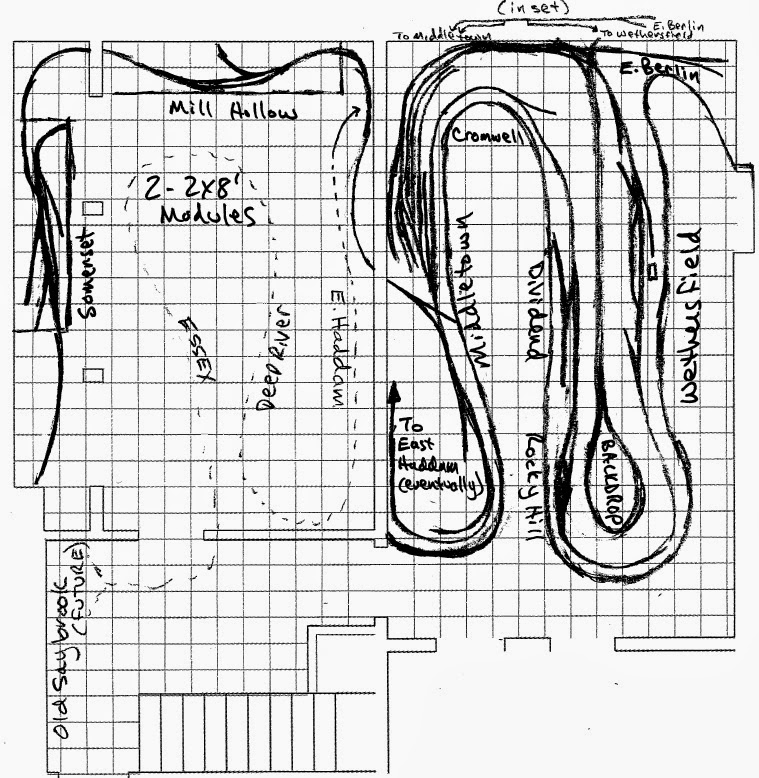 The area I'm talking about heads down/south from "Somerset" (left side of the trackplan), tunnels through/behind walls, and punches out behind where Old Saybrook will be. 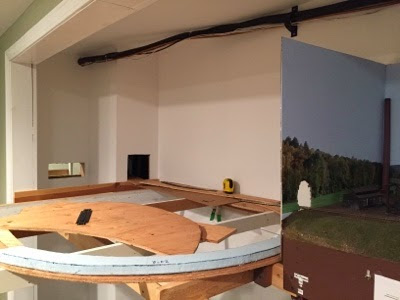 Here's an overview shot of the area I'm working on to orient you. The end of the Air Line module is on the right and the turnback curve of the Shoreline is in the middle-left foreground. The left end of that curve will go through the left hole in the wall into the Old Saybrook scene. But the back (right) end of the curve will go through the right hole in the wall (that big black square in the back center of the photo).

The Shoreline is on the low level and the Air Line will extend across/above it and also go through that right hole - directly above the Shoreline. 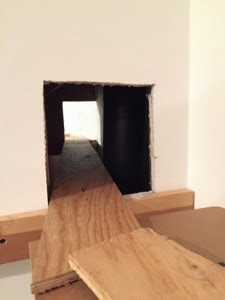 Here's a closeup of the hole/tunnel the Shoreline (lower level) and Air Line (upper level - not shown here) have to go through. As you (hopefully) can tell, this wall is a built-out wall that boxes in the waste pipe (which you can see just inside the hole to the right). From one hole to the other is a distance of 37" and that stand-in piece of plywood subroadbed is 4'4" (52") long. 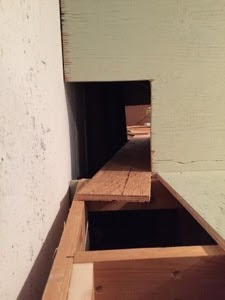 Here's the other end of that subroadbed - and the other hole out of which it comes. Remember, the Air Line will be directly above the Shoreline through this tunnel through the wall. 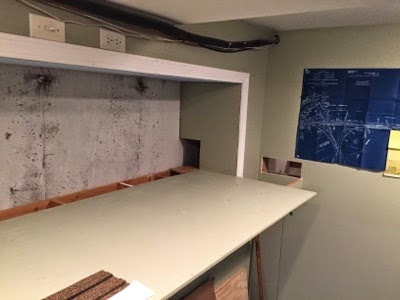 And to provide the final overview/context shot, here's where the lines come out into the Saybrook scene (actually, the tracks will be hidden behind Saybook, but that's a problem for another day).

So after getting only this far tonight, I have a few questions I hope you can help me with:


As you can see, it's unfinished back there. I was considering boxing both tracks in (running them through box tunnels, essentially). At least I'd try and glue in a piece of styrofoam insulation as a "ceiling/roof" of sorts to keep too much dust from raining down on the track.
The horse has kinda left the barn on this - I'm (pretty much) committed to running the tracks through the wall/tunnel this way. It by far makes the most sense for my operations. But, knowing that future access will be impossible on this section, I plan to make the track as bullet-proof - and keep it as clean - as possible.

Speaking of access, I obviously can't get in there to build any supporting benchwork, so I plan to glue/screw the subroadbed directly to 1x3s on edge for support. The ends of the 1x3s would be secured to the joists present at each end of the tunnel.
While the track will be Atlas code 83, I plan to place code 100 rerailers (that I have on-hand) about 1/2 way across the span (in the middle of the tunnel). Do you think the benefit of having a rerailer outweighs the 4 extra rail joints? (actually, only 2 extra since the span will take two 3' sections of flextrack and I'll have the joint fall in the middle of the tunnel).

I also plan to solder the railjoints - especially if I use the rerailers - and have feeders go to each section of 3' flex from buswires running along the spans.
As you can probably tell, I'm a little apprehensive about having two mainlines (Air Line and Shoreline) go through this inaccessible section. I'm hoping that folks with far more experience with this sort of thing can give me some reassurance - or effective warning!

Despite this mental roadblock, it's nice that there's at least a modicum of progress to share. I was able to visit a couple of local layouts last weekend (thanks Jonathan and Bob!!) and got a much-needed shot of inspiration. Of course, having my own layout scheduled for an open house this August is kindling a fire under me as well.

Fortunately, once I get the railroad built through this tunnel, construction should continue at a pretty quick pace and with any luck (and less TV) I should have Shoreline trains running through Old Saybrook in a matter of weeks!

And with your help, I should be able to get track laid through the wall without too many problems. So let fly with the comments and email - I'm standing by... :^)
Posted by Chris Adams at 6:53 PM