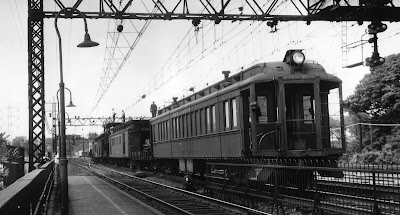 The photo above, provided courtesy my friend Mike Ribuffo (who is also editor of the highly-acclaimed Shoreliner magazine), shows one of the New Haven Railroad's Wire Trains - a special work train that, as you might have guessed, repaired and maintained the overhead catenary on the West End of the railroad. The car in the foreground - numbered "W-162" - was the crew car for the Bridgeport Wire Train and is the subject of today's post . . .
Originally built for the New Haven in 1907 as a first class copper clad coach with open platforms and truss rods, it was rebuilt by the railroad at its Readville shops in 1929. At that time, it received a steel underframe and enclosed steel ends, as well as a new number - #4404. In the late 1940s, it was converted to company service as wire train crew car #W-162.
The W-162 was saved from the scrapper by Mr. Bill Dulmaine, longtime president of the NHRTHA and publisher of the Shoreliner and - while parked on a siding in Grafton, MA - was used for many years as the unofficial "office" of the Association. Many a Shoreliner was developed, pasted up (literally - long before computers), and produced in this car. And during the winter months, the crew was warmed by an old NHRR shanty stove acquired for the purpose.
After many years of faithful service in its second life (actually, third life if you count its original use as a day coach, then wire train crew car), Bill eventually decided to let the car go and it is now the Parlor Car at the Steaming Tender Restaurant - which just so happens to be the site of an annual dinner I host during the weekend of the big Springfield show.
But check out the headlight . . .
In work train service, these cars were placed at the opposite end from the locomotive and spent as much time being pushed as pulled. And when being pushed, the rules required a light as well as whistle on the leading end. So, the W-162 received such appliances when it was converted to work service. Best guess is that this particular headlight came off a steam locomotive that was on the scrap line at the time (c. 1949). Unfortunately, there's no info on which specific engine it may have come from.
Thankfully, shortly after purchasing the car, Bill removed and stored the headlight safely for many years - until recently, when he wanted to give it a new home . . .
He reached out to me and we arranged a date for me to pick it up. Unfortunately, a 4 day hospital stay intervened earlier this month, but this past weekend The Missus and I swung by Bill's on our way to do some leaf peeping. Unfortunately, my truck has also been "converted to work service" and is limited to dump runs only these days. So we drove up in my car instead: 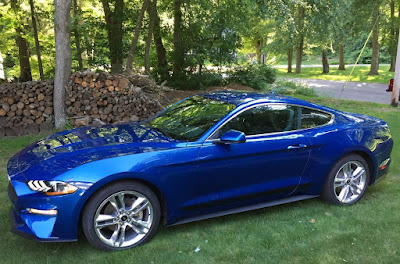 Not exactly the best vehicle to use for hauling stuff (though it's admittedly very good for haulin' tail....), but I figured "it has a trunk - how big could a steam locomotive headlight be?"
Well, as you might have guessed, the answer is "just a bit larger than what you can fit through the trunk opening." I worked up quite a sweat trying every which way to angle, fit, and finagle that light into the trunk. I knew if I could just get it through the opening, it'd fit just fine.
The trunk's big enough - but the opening just..... wasn't.
Good thing the back seats fold down: 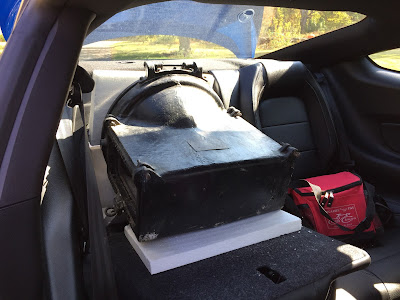 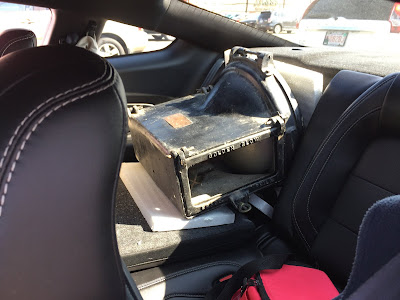 Even then it was challenging to get it in there without damaging the interior in the process. Fortunately, Bill had some chunks of styrofoam to cushion everything for the journey. 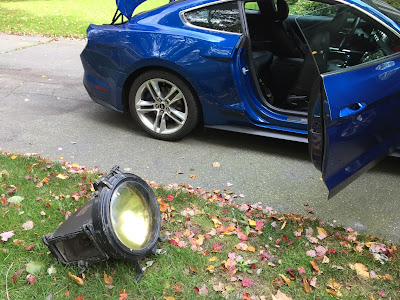 And it made it home safe and sound. Whew! Sure does look a good deal larger than the Custom Finishing detail part I use on my models... 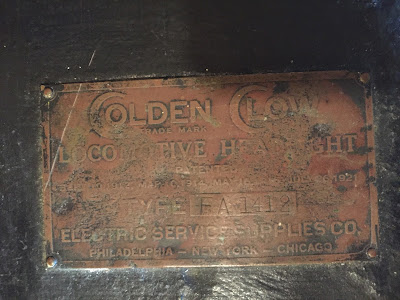 The New Haven RR used the Electric Service Supplies Co (ESSCO) "Golden Glow" headlight on all its steam locomotives in later years and also on many of its electric MU cars. In photos, you can usually tell the headlight is a "Golden Glow" because the hinge for the lens is on the top rather than on the side, as with most headlights. And while the only known provenance of this particular light was that it was used on the W-162, I choose to believe the very plausible story that it started its life on one of the NHRR steamers I'm so fond of. Maybe one of these days, there'll be some way to find out for sure. 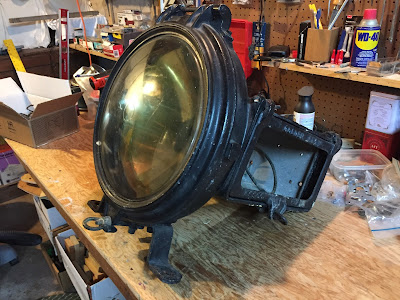 In the meantime, thanks to Bill's foresight in saving this small large piece of New Haven Railroad history, I'm now the proud owner of an official Locomotive Headlight (says so right on the nameplate). Now I just have to decide whether to try and restore it (and perhaps even light it), or leave it as-is with the original patina.
Thankfully, there's no hurry to decide.
Posted by Chris Adams at 8:04 PM